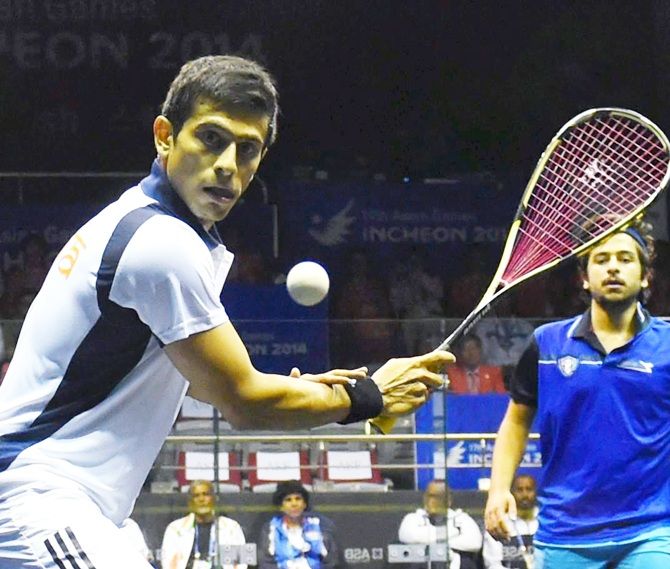 India’s squash players wrapped up a historic performance at the Asian Games, clinching an unprecedented men's team gold after the women's side settled for its first ever silver in Incheon on Saturday.

India are now in the 11th position in the medals tally.

Led by Ghosal, the Indian men’s team edged Malaysia in the summit clash to claim gold.

Ghosal played out of his skin to guide India to a 2-0 win against Malaysia in a n energy-sapping contest that lasted two hours and 26 minutes at the Yeorumul Squash Courts here.

It was 25-year-old Harinder Pal Singh Sandhu, who started the proceedings for India on a positive note as he saw off Iskandar Mohamad Azlan Bin 11-8, 11-6, 8-11, 11-4 in the opening match that lasted 58 minutes.

Ghosal had to dig deep against the Malaysian, who turned the tables in the fourth game which lasted 19 minutes.

In the decider, the Indian managed to keep his nose ahead and reached the match point at 10-8. Ong saved one but the Indian closed the door on his rival on the next opportunity to bring joy to the country's contingent.

The inconsequential third match between Mangaonkar Mahesh and Mohd Adnan Mohd Nafiizwan Bin didn't take place after the Indian withdrew from the contest. 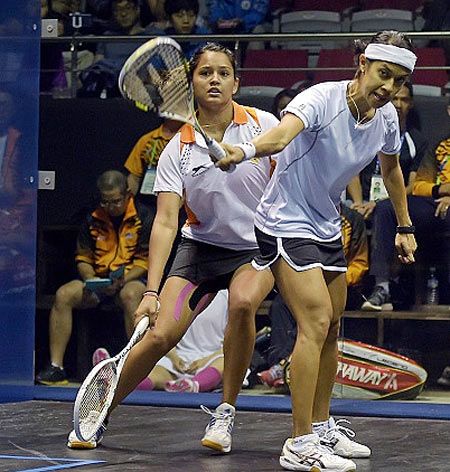 Earlier in the day, the Indian women's squash team went down to Malaysia 0-2 in the final to settle for the silver medal.

Deepika Pallikal and Anaka Alankamony lost their matches in a contest which lasted a little over an hour.

Alankamony opened the proceedings for India and did up some fight before going down 9-11, 10-12, 2-11 to Odette Arnold Delia in 43 minutes.

Next up was Pallikal, who once again faced World No 1 Nicol David after losing the singles semi-final to her earlier in the week.

Joshana Chinappa's inconsequential final rubber did not take place after her rival Wee Wern Low withdrew from the contest. Joy was brought to India first thing on the day when the men's compound archery team picked up a historic gold medal.

Young archer Abhishek Verma was hero of the day as he combined with Rajat Chauhan and Sandeep Kumar to clinch the gold medal in the compound team event before picking up the individual silver medal at the Gyeyang Asiad Archery Field.

The spotlight belonged to the archers, who scripted history with their maiden compound gold medal by shocking favourites South Korea.

The women's trio had set the tone in the morning by clinching the compound team bronze by defeating Iran in the play-off for the third position at the Gyeyang Asiad Archery Field. Later, Trisha bagged a bronze in the individual event.

Rajat, Sandeep and Abhishek worked wonderfully well in unison to lead their formidable hosts -- the world silver medallists -- right through the 24-arrow finals to emerge triumphant by two points (227-225) in the non-Olympic Compound event which has made its debut in Incheon.

Trisha springs a surprise with bronze 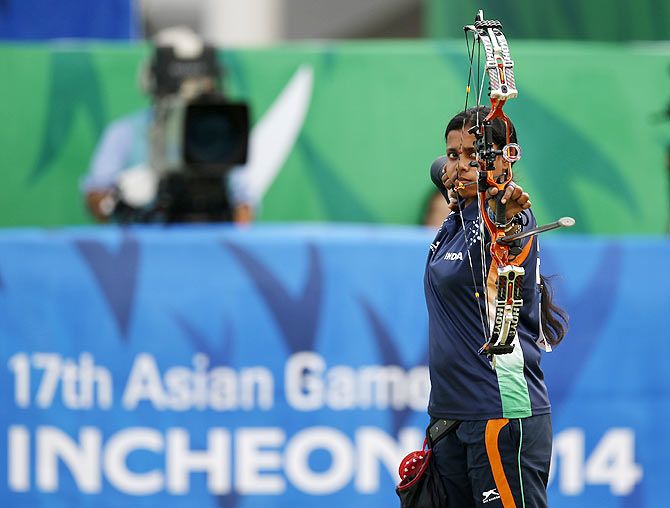 The men's archery gold was the second medal of the day and came just one hour after the young Indian women's trio of Trisha Deb, Purvasha Shende and Jyothi Surekha Vennam clinched the bronze medal by winning the play-off against Iran 224-217.

Later Verma fought gamely in the gold medal match against Iran's Ebadi Esmaeil 141-145. The superb display of the compound team made up to some extent the disappointing show put up by the recurve team of better known archers so far at these Games.

In what came as surprise, Trisha won a bronze in the compound women's individual event.

Trisha won 138-134 against Chinese Taipei's Huang I Jou. The Indian was lucky to finish on the podium given that she was trailing her rival till the last arrow. 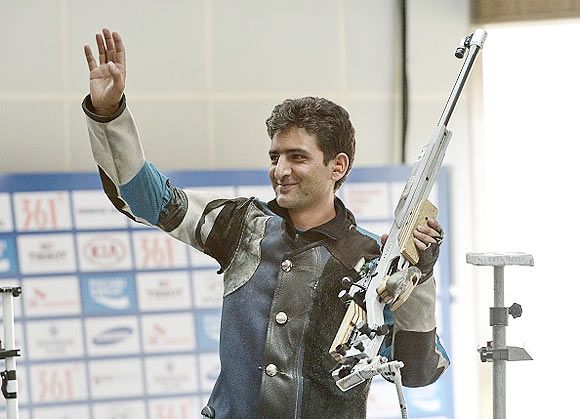 India shooter Chain Singh did himself and the country proud after winning bronze in the 50m 3-position rifle shooting event.

Singh shot a total of 441.7 points to finish behind Chinese shooters -- Cao Yifei and Zhu Qinan -- who bagged the first and second positions with 455.5 and 455.2 points respectively.

While Singh had entered the finals after finishing seventh in the qualification round, Gagan and Sanjeev failed to make the final cut, ending on 12th and 15th spots, respectively in the qualifiers. Indian boxers also moved to the quarter-finals with easy victories over their opponents.

Sarita got the better of home favourite Chungson Ri, while Pooja defeated Erdenesoyol Undram of Mongolia in her pre-quarters bout.

India's Achanta Sharath Kamal and company kept the country's hopes alive in table tennis as the men's and women's team paddlers won their respective preliminary round matches on Saturday.

The Indian men's team blanked Kuwait 3-0 in a Group B match.

Meanwhile, the Indian men's team got lucky in a Group A game when they got a walkover against Nepal.

The Indian women's teams also did not falter against Malaysia and Nepal in their respective group matches.

The preliminary round Group A Division 2 match was no different as West Bengal star Poulomi Ghatak battled past Lee Wei Beh of Malaysia 11-9, 15-17, 11-8, 11-5 in just about half-an-hour's time.

The men's hockey team also kept their medal hopes alive by advancing to the semi-finals with a scrappy 2-0 win over China in their last pool B match.

The Indian women's volleyball team went down to a formidable Chinese side in straight games in the quarterfinal match.