A miffed Kerala Governor Arif Mohammad Khan on Thursday said he was not a 'rubber stamp' and hit out at the state government for not informing him before moving the Supreme Court against the amended Citizenship Act. 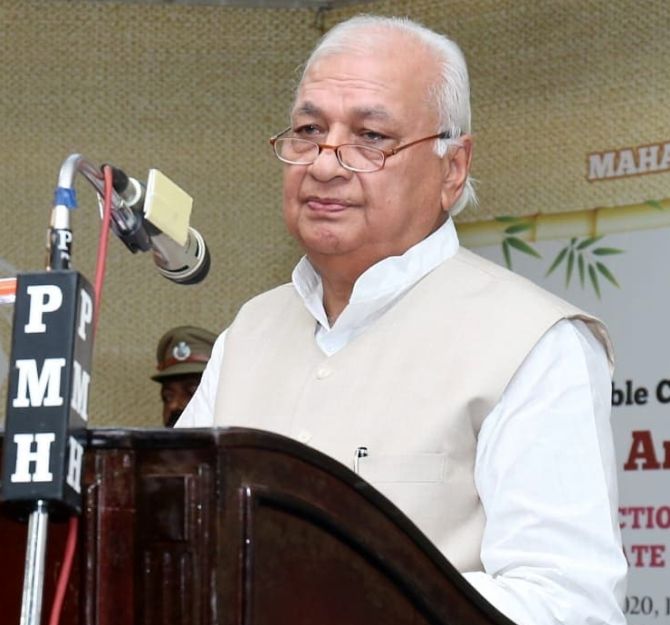 The government had moved the apex court on Monday against the new law, saying it was contradictory to constitutional ethos.

"Courtesy demanded, protocol demanded that they should have informed the governor first," Khan told reporters in Thiruvanathapuram.

Locking horns, Chief Minister Pinarayi Vijayan retorted: "This is a democratic country and one must understand the democratic system. Earlier, during the British
Raj, there were resident commissioners to check local chieftains."

"However, there is no resident commissioner above the state assembly," Vijayan said, hours later while addressing an anti-CAA rally at Malappuram without making any reference to the Governor's outburst.

Kerala has been at the forefront of the anti-CAA agitation and became the first state to pass a resolution in the assembly seeking the CAA's scrapping and move the apex court against the amended law saying it was contradictory to Constitutional ethos.

Khan has been at loggerheads with the Left Democratic Front government since it convened a special assembly session to pass a resolution seeking the Citizenship Amendment Act's scrapping.

Khan on Thursday made his displeasure public, saying protocol demanded that as a Constitutional head he should have been informed first before the top court was moved and termed the government's act 'improper'.

"But protocol demanded that they should have informed me first," Khan said.

Though he said he had no problems with the government approaching the top court, it was 'improper' that the constitutional head was not informed, he added.

On reports that he had not signed the ordinance with respect to the amendments to Kerala Panchayat Raj Act 1994 to increase number of constituencies in Local self-governments, Khan said he was not a 'rubber stamp' as the Constitution expects him to 'apply his mind and to ensure that the process of ordinance was not used for some extraneous purposes'.

The governor also dismissed the passing of the resolution and questioned how a state government could use a 'constitutional body' (Assembly) to denounce an Act of
'another constitutional' body (Parliament).

"But this is breach of protocol, breach of courtesy and I will also look whether without the approval of the governor, the state government can go to the Supreme Court, I will have to look into this issue also...they should have informed me," Khan said.

After a section of the media came out with reports that the governor had refused to sign the ordinance on the local self-government ward reorganisation, which had recently received the cabinet approval, Khan said he had only raised certain questions as he has to be satisfied.

"I consider myself under the law and nobody else is above the law. Law will have to be respected, enforced and clearly I am not a rubber stamp," he said.

The Governor further said he had also raised certain questions on the desirability of having an ordinance when the Assembly was going to meet in a few days time.

Instead of delivering his constitutional responsibility, the 'political stands' taken by Khan was 'strange', he said.

"The state government which was elected democratically is functioning as per the government policies and Khan's stand was unbecoming of the constitutional post he was holding," Vijayaraghavan added.