Dayanidhi and nine others are facing charges that companies owned by them mined sand and granite without permission.

Justice Mathivanan of the Madurai bench of the court also rejected the anticipatory bail plea of Dayanidhi's business partner S Nagarajan and the bail application of Deputy Director of Mines Department Shanmugavel, who have already been arrested in connection with the case.

The court rejected anticipatory bail pleas of a granite company owner and his son in the alleged scam while granting relief to the owner's wife.

The government cracked down on the firms after former Madurai collector U Sahayam estimated the losses incurred from illegal granite mining at around Rs 16,000 crore.

On September 15, Vigilance and Anti-Corruption officials booked two IAS officers--former Madurai district collectors N Mathivanan and C Kamaraj -- for alleged corruption in the case and conducted raids across 34 places in the state.

The police had alerted immigration authorities to help them in preventing Dayanidhi and other accused from leaving the country. The companies' accounts have already been frozen. 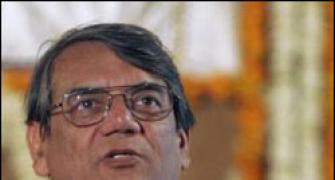