The IIT plan is at the heart of Narendra Modi's ambitious plan to restore the river's glory.
Rashme Sehgal reports for Rediff.com 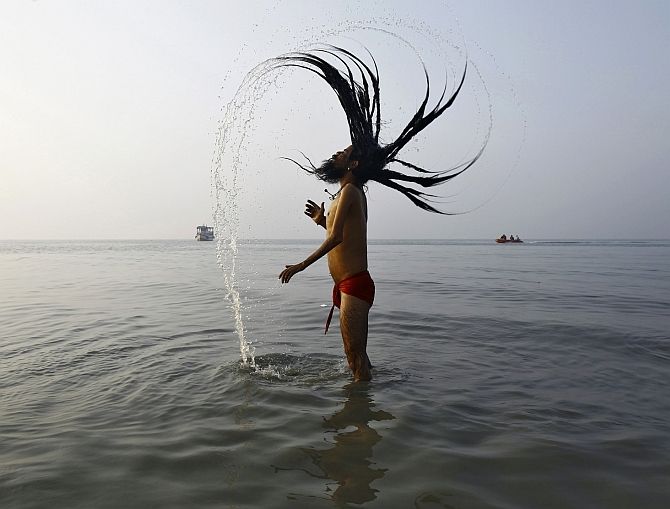 In 2010, then environment minister Jairam Ramesh had assigned a consortium of seven Indian Institutes of Technology to draw up a detailed plan to rejuvenate the Ganga.

The blueprint -- the Ganga River Basin Management Plan -- was submitted earlier this year to the Narendra Modi government, which made it the platform for its flagship Ganga rejuvenation project.

The project, which presently goes by the name Integrated Ganga Conservation Mission or 'Namami Ganga,' has a budgetary allocation of over Rs 6,000 crore (Rs 60 billion).

The thrust of the IITs' report has been to restore the river's ecological and geological integrity by ensuring its Aviral Dhara (continuous flow) and Nirmal Dhara (unpolluted flow).

The report identified 6 mission modes to revive the Ganga:

The report, coordinated by Professor Vinod Tare of IIT-Kanpur, highlights that the river's physical environment is governed by a complex combination of natural and man-made processes.

Unfortunately, increasing human activity and industrialisation has resulted in a situation where the river's very survival is under threat. The report suggests several detailed measures which can reverse this trend.

The National Environmental Engineering Research Institute has slammed the haphazard construction of dams every 20 km on the Ganga, which has left the river bereft of a minimal flow.

A NEERI report further warned that the construction of the Tehri dam has blocked the very sediments that played an essential role in the Ganga purifying itself.

For Aviral Dhara to return, the huge amounts of water being diverted for agricultural purposes in the Upper and Lower Ganga canals would also have to be reduced.

The run-off water from the agricultural fields, which brought pesticides and other pollutants into the river, would also have to be regulated.

For Nirmal Dhara, which falls under the category of Mission 2, the Ganga River Basin Management Plan maintains it could be revived with proper management of solid and liquid waste generated from industrial sources, riverfront development, floodplain management and rejuvenation of water bodies.

The emphasis is that no untreated municipal sewage or industrial effluents will flow into the Ganga by 2020.

In a recent interview, Dr Tare spoke about the 'no outfall' principle whereby even the common man could monitor that no drains were be allowed to flow into the Ganga.

"If we implement this policy, even the common man can observe whether the drain is flowing into the river or not. That is easy. But its Biological Oxygen Demand content, Chemical Oxygen Demand, coli-form content -- that is a matter of controversy. If we prevent the waste water from entering the river itself, the option is that the drain should be dry. If it is not dry people can take photographs and lodge complaints," Dr Tare said.

On the issue of the discharge of sewage into the river, the Ganga River Basin Management Plan is more emphatic.

It says that the focus must shift to the treatment of sewage as an industry. The discharge of sewage from each drain needs to be measured and then treated.

On the issue of industries discharging effluents into the Ganga, the Ganga River Basin Management Plan is very clear that industries will have no choice but to practise zero-discharge mechanisms by running plants on the closed-loop principle where no discharge is allowed to exit the plant and they are given only enough resources to make meet the gap between requirement and recycled matter.

Dr Tare questions the need why fresh water should be given to industries. Rather they should recycle their water completely.

He pointed out that if an industry produced 100 units of effluent which in turn produced only 70 to 80 units of recycled water; the remaining balance should be met by treating sewage. Thus their entire fresh water consumption would be met in this way.

"This scheme is difficult to implement by regulation and policing," Dr Tare said. "For this, we need to do pricing. We need to decide to price fresh water at two times that of treated water." 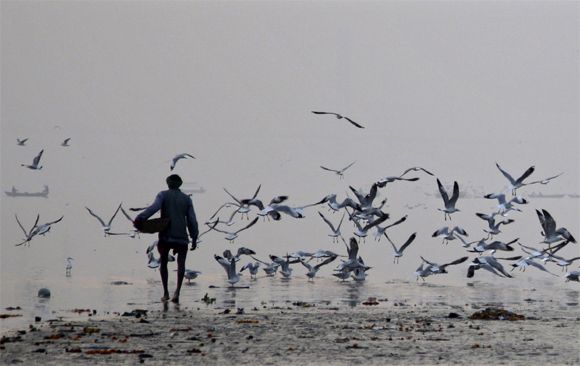 River front development, floodplain management and rejuvenation of water bodies were also recommended by the IITs to ensure Nirmal Dhara.

It was keeping in this in mind that Uma Bharti, water resources minister and vice-chairperson of the National Ganga River Basin Authority, invited Dr Bimal Patel (who designed the Sabarmati Riverfront Development project in Ahmedabad) to meet corporators of all the cities located along the Ganga with a view of showing them how they could develop their riverfronts.

Modi has allocated Rs 100 crore (Rs 1 billion) for the beautification of the ghats along the Ganga in Varanasi.

To ensure ecological restoration, the IITs suggested restrictions on river bed farming and also on gravel and sand mining.

The IITs also suggest a control of alien specie invasions, over-fishing and a control of fishing during the spawning seasons. Promotion of organic farming has also been stressed as a check on land degradation and in order to enhance long term soil fertility.

Similarly, improving drainage congestion being caused by unplanned expansion in rail and road network by providing culverts and pathways in several parts of UP and Bihar has been suggested.

The IITs also suggest a network of canals to drain water from permanently waterlogged areas, initiation of flood awareness programme and educating people to move away from flood prone areas to ensure better river hazard management.

The IITs pointed out that technologies used in the past did not remove pathogens and coliforms (bacterial contamination) in the water and has suggested that like in Western countries, the water must be treated not up to the secondary level but up to the tertiary levels.

The Supreme Court recently pulled up the central government for the inordinate delays in cleaning up the river. The court pointed out that more than 28 years had passed after the government launched the Ganga Action Plan 1 and yet little seemed to have been done on the ground.

In 2013, the Central Pollution Control Board had released statistics that showed unacceptably high levels of coliform levels across 1,000 km stretch of the river and that 600 highly polluting industries continued with their toxic discharge into the river.

The water quality of the Ganga in these intervening years has only become worse.

Varanasi-based Dr Hemant Gupta, a gastroenterologist and endoscopist, says patients in the temple town have been spending up to Rs 15,000 a day on medicines and still not being cured.

"If this is not the equivalent of a super bug then what is? But when I went public with this disclosure, medical authorities denied it," Dr Gupta said.

Dr Gupta, along with the non-government Panchganga Foundation, tested water samples from 18 ghats along the Ganga in Varanasi in September 2014. The samples showed incredibly high levels of bacterial contamination.

Meanwhile, river engineers led by Professor U K Choudhary who heads the M M Institute of Technology for Ganga Management in Varanasi, are opposed to the government's decision to hand over river management to the IITs insisting they are much better equipped to deal with the rivers.

"We understand the kind of action and reaction that takes place between water, rocks and air," Professor Choudhary pointed out. "We also understand how atmosphere, temperature and pressure along with rainfall are being affected by the construction of dams."

"The environmental conditions in these areas have been altered and yet none of the reports brought out by the IITs highlight these factors. Ninety five per cent of the river's water is being diverted at Bhimgora Barrage and Hathki Paudi in Hardwar; how can we hope to ensure a nirmal (pollution-free) and aviral (uninterrupted) flow of the river when the river has no water?"

"If that is not bad enough, a government minister plans to build dams at intervals of 100 km across the river. Under these circumstances how can a minimal flow for the river be ensured," he asked.

"We are presently withdrawing 10,400 cumex (cubic feet per second) of water from the river. While 6,200 cumex of water is being withdrawn from the western Ganga 4,200 cumex of drinking water being supplied to Delhi. When I was a member of the Tehri Dam committee I warned against water being carried such long distances, but my warnings went unheaded."

"There is a basic law of nature which people need to understand," added Professor Choudhary. "If water levels are going to keep declining, then the Ganga will never be either cleaned or rejuvenated. The river needs a minimum level of velocity and as velocity of water levels keep declining, pollution levels will keep increasing." 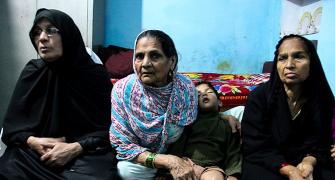 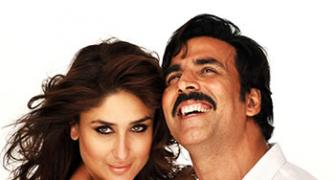 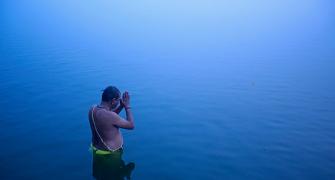 PICS: The quiet splendour of the Ganga 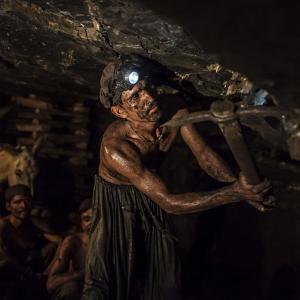