Mira Nair is India Abroad Person of the Year 2007 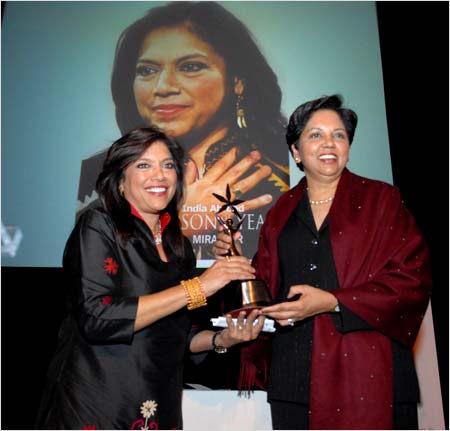 Mira Nair, the Oscar-nominated director of acclaimed films like Monsoon Wedding, The Namesake, Mississippi Masala and Salaam Bombay!, was chosen as the India Abroad Person of the Year 2007, on March 28 at a glittering ceremony held at the Gotham Hall in New York City.

The award was presented by Indra Nooyi, Chairperson and CEO, Pepsi, and India Abroad Person of the Year 2006.

"After all, the Indian-American community is my extended family; India Abroad is its mirror and voice -- hence the pride I continue to take in the trophy that occupies a prominent position on my mantel," said Nooyi.

Nair rushed to New York after a week-long trip to Mozambique, Namibia, South Africa and Toronto, Canada, where she will shoot her next film Amelia, starring Hillary Swank, to receive the award. Her husband Mahmud Mamdani, a professor at Columbia University, was present on the occasion while only child Zohran, on whose insistence actor Kal Penn was selected for The Namesake, could not make it.

In an acceptance speech punctuated by both humour and poignance, Nair reflected on her life's journey from Orissa, where she was born, to Hollywood, where she is now a member of the A-List of directors. She paid rich tribute to her mother Praveen and all the other women who had inspired her to achieve heights no other Indian filmmaker has scaled in international cinema.

Also honoured at the event were legendary economists Professor Padma Desai, arguably the most eminent expert on the Russian economy, and her husband Professor Jagdish Bhagwati, a leading advocate for free trade and globalisation.

"We gather to celebrate a community, increasingly, and justly, famed for its achievements across a vast spectrum of activity, and to honour those Indian Americans who are deemed to be the first among these equals," said Balakrishnan.

The awards ceremony was attended by diplomats, artistes, high ranking professionals, businessmen and stalwarts of the community. It was held at the stately Gotham Hall, formerly the headquarters of Greenwich Savings Bank, which hosted an event honouring soccer legend Pele and tennis great Boris Becker last week.

Dr Renu Khator, President and Chancellor of the University of Houston, was awarded the India Abroad Publisher's Special Award for Excellence. The former provost of the University of South Florida, Dr Khator left India as a young bride 35 years ago, and is among America's premier university administrators.

The India Abroad Youth Achiever 2007 Award was given to 24-year-old Somdev Dev Burman, the first Indian ever to win the prestigious US collegiate tennis title. A distant relative of musical genius R D Burman and a senior at the University of Virginia, Somdev burst onto the tennis scene by winning one of the world's foremost amateur titles in March 2007.

Somdev's award was accepted by Sunil Gulati, president, US Soccer, as the newest member of India's Davis Cup team was away playing a collegiate tournament.

The awards for service to the community went to Dr Navin Shah and Dr Joy Cherian. Dr Shah, who helped pioneer a revolutionary ambulance service in India, was awarded the India Abroad Community Service Award 2007.

Dr Cherian received the first Lifetime Award for Service to the Community. The first Indian American to be appointed to a US government position, Dr Cherian has been a towering personality within the community.

In 2004, Olympic gymnast Mohini Bhardwaj, captain of the American team that won a silver medal in Athens, was chosen as the India Abroad Person of the Year, and in 2005, then US Congressman Bobby Jindal, now the governor of Louisiana, received the honour. 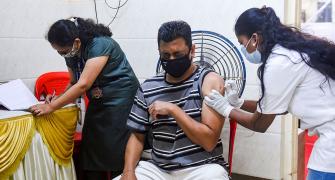 India Abroad Person of the Year 2007

India Abroad Person of the Year 2006