Tensions escalated between armed forces over the creation of four new integrated theatre commands on Friday, with Chief of Defence Staff General Bipin Rawat saying that the Indian Air Force is like "a supporting arm" akin to artillery or engineers in the Army. Referring to the row over the statement, former Deputy Army Chief Lieutenant General Raj Kadyan said, "The creation of theatre commands in the Indian defence forces has led to a very unfortunate and a very unsavoury controversy. There is a very famous saying by a field marshal in World War 2 that 'The only thing more difficult is accepting a new idea while getting rid of the old idea.' I think that scenario is playing out.

"The creation of CDS was resisted mainly by the Air Force. It took nearly two decades after the Kargil review committee recommended this idea. But it has come true. This is only the first step. Creating another general doesn't solve the problem. In today's warfare, we need very quick decisions", Kadyan said.

"India is a vast country with 15000 km of land border and on two sides we face an adversarial situation. We also have a 7500 km coastline. Indian Navy doesn't get seen much in the media because they operate in the seas where there is no media. But is the army and the air force have a media presence. If you need to make quick decisions, then you need to decentralise the decision-making authority which is what the theatre commands are achieving", Kadyan said.

"The fact that the change will be resisted is not something which is unknown. It is more of a turf for whether you call air force a supporting arm as General Bipin Rawat has done or for what air force has said. It is a question of semantics," he said.

Kadyan further said, "Equally strong is the argument that today Army needs the support of the Air Force to its aid it whenever required. It is like an argument saying that 'in a train whether the engine is more important or the wheel'. The fact is both cannot work without one other. Senior officials need to sit together and discuss out the matter," he said.

Another defence expert, former Deputy Chief of Indian Army Staff Lt General Gurmeet Singh said, "On August 15, 2019, PM Modi announced the formation of Chief Of Defence Staff. Our CDS was appointed on January 1, 2020. Integration and jointness is a must in the forces. Hence, there is no scope for any turf. I think that should be clear."

"The need for change was never in doubt. We definitely need to improve our joint war fighting capabilities. What was being quibbled behind closed doors and now in the media is the type, shape and size of the changes. The rant by our top military leader last afternoon probably reveals his frustration and pushing it through an agenda in a democratic setup like ours," said former Western Air Commander Air Marshal R Nambiar (Retd) attacking the CDS over his remarks on the Indian Air Force.

Chief of Defence Staff General Bipin Rawat on Friday talked about the IAF's air defence charter as well as its role as a supporting arm to the ground forces just as the artillery or engineers support the combatants within the Army.

"Do not forget that the Air Force continues to remain a supporting arm of the armed forces, just as the artillery or engineers support the combatants within the Army. They have an air defence charter and support the ground forces in time of operations," Gen Rawat said, adding the force has to understand its basic charter. 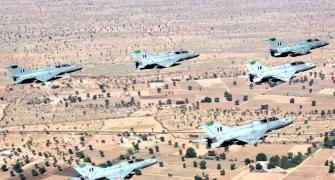