The businessman’s wife Priyanka Gandhi in a show of support said that she supported him and that everyone knew why this was being done. 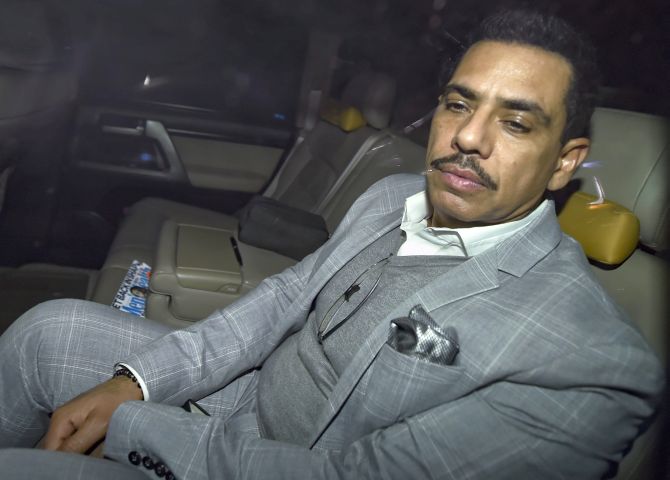 IMAGE: Robert Vadra left the Enforcement Directorate office around 9.40 pm after arriving earlier in the evening. His lawyer said that Vadra had replied to every question and he was asked to appear again on Thursday. Photograph: Ravi Choudhary/PTI Photo

Robert Vadra, the brother-in-law of Congress chief Rahul Gandhi, was on Wednesday questioned by the Enforcement Directorate for about five-and-a-half hours in its money laundering probe into alleged possession of illegal foreign assets, days after he was directed by a city court to appear before the central probe agency.

Vadra’s wife Priyanka Gandhi accompanied him in a white Toyota Land Cruiser and dropped him outside the ED’s office in Jamnagar House, in a move seen as sending a political message to Congress’s opponents ahead of Lok Sabha polls.

Vadra left the office at 9:40 pm alone in the same car in which Priyanka had dropped him.

His lawyer said Vadra has replied to every question that was put to him.

“All charges against him are wrong. We will cooperate with the agency 100 per cent,” Suman Jyoti Khaitan, his lawyer told the mediapersons waiting outside the ED office.

Vadra has been called again on Thursday. 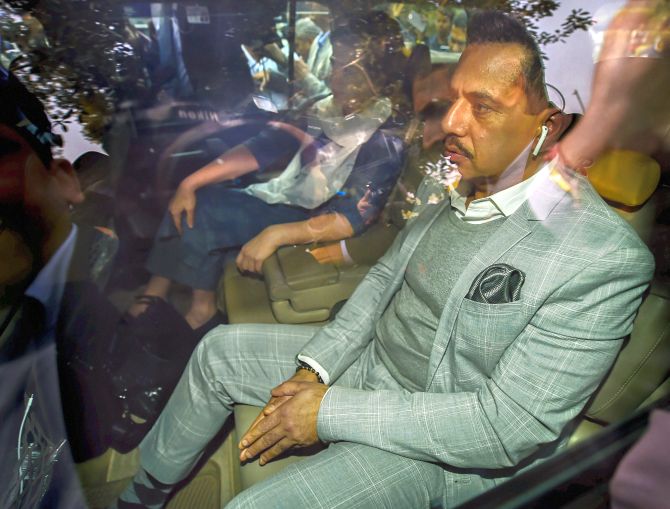 IMAGE: Businessman Robert Vadra arrives to appear before Enforcement Directorate for questioning in a money laundering case. He was accompanied by his wife Priyanka. Photograph: Ravi Choudhary/PTI Photo

Priyanka, shortly after dropping her husband, took charge as the Congress general secretary in-charge of Uttar Pradesh East, after her formal induction into the Congress party on January 23.

“He is my husband, he is my family... I support my family,” Priyanka said in a show of support to Vadra, who returned from London earlier in the day.

Priyanka was asked by newsmen at the All India Congress Committee headquarters whether she was sending any message by dropping her husband at the ED office.

Asked if it was a political vendetta, she said everyone knows why this is being done.

On the day of Priyanka’s appointment, Vadra had sent an emotional message to her. 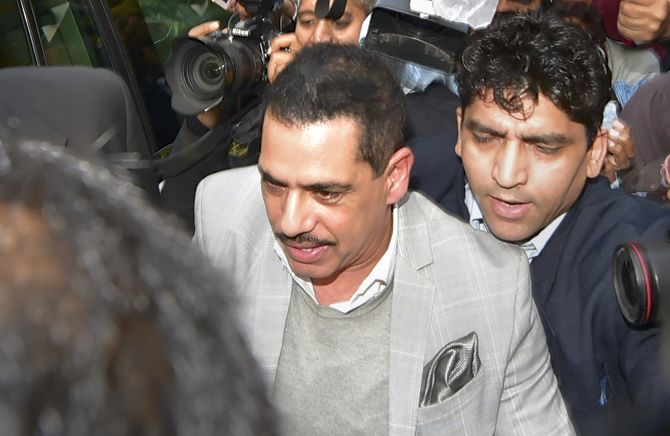 IMAGE: It is for the first time that Robert Vadra, son-in-law of Sonia Gandhi, is appearing before any probe agency in connection with alleged criminal charges of dubious financial dealings. Photograph: Arun Sharma/PTI Photo

It is for the first time that Vadra, son-in-law of Sonia Gandhi, is appearing before any probe agency in connection with alleged criminal charges of dubious financial dealings.

After jostling with a posse of assembled media persons, Vadra entered the ED office around 3:47 pm, minutes after a team of his lawyers reached the premises. He then signed the attendance register before being taken in for questioning.

Vadra has denied allegations of possessing illegal foreign assets and termed them a political witch hunt against him. He has alleged he was being “hounded and harassed” to subserve political ends.

Ahead of the questioning by a team of 3 ED officials, official sources said Vadra will be put through a dozen questions on transactions, purchase and possession of certain immovable assets in London and his statement will be recorded under the Prevention of Money Laundering Act.

It is understood he was also grilled about his links with absconding and controversial defence dealer Sanjay Bhandari. 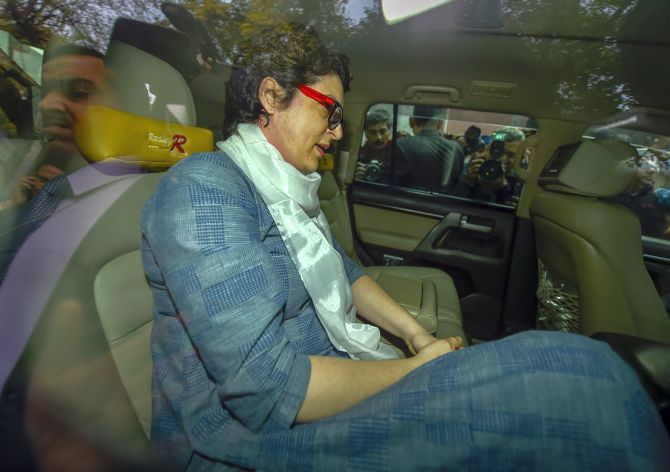 Vadra was directed by a Delhi court on February 2 to cooperate with the probe being carried out by ED after he knocked at its door seeking anticipatory bail in the money laundering case.

The court directed him to appear before ED on Wednesday on his return from London.

The Bharatiya Janata Party seized on the questioning of Vadra to attack the Congress and alleged he got kickbacks from a petroleum and defence deal which took place during the United Progressive Alliance regime.

BJP spokesperson Sambit Patra alleged at a news conference that Vadra bought 8 to 9 properties in London from the money he got as kickbacks from a petroleum and a defence deal which took place in 2008-09. Patra did not provide any evidence to back up his claim.

The BJP had full four-and-a-half years to investigate but could not find anything, he claimed at a news conference.

The attempt is to mislead, confuse and to create and ambience before election, but people see through this, he said. 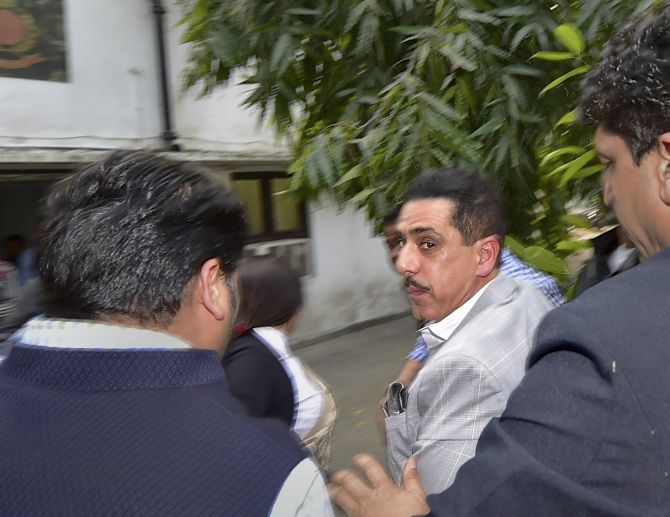 IMAGE: Official sources said Vadra was put through a dozen questions by a team of 3 ED officials on transactions, purchase and possession of certain immovable assets in London and his statement was recorded under the Prevention of Money Laundering Act. Photograph: Arun Sharma/PTI Photo

The ED case against Vadra relates to allegations of money laundering in the purchase of a London-based property at 12, Bryanston Square worth £1.9 million (Rs 17 crore), which is allegedly owned by him.

A local Congress leader Jagdish Sharma, questioned by the ED in this case few weeks ago, was present outside the agency’s office after Vadra went in. Talking to newsmen, Sharma alleged that Vadra was being “framed” in the case.

The ED had also carried out raids in the case in December last year and grilled his aide Manoj Arora, an employee of a firm linked to Vadra, Skylight Hospitality LLP.

The agency had told the court that it filed the money laundering case against Arora after his role cropped up during the probe of another case by the IT Department under the 2015 anti-blackmoney legislation against absconding arms dealer Sanjay Bhandari.

It had alleged that the London-based property was bought by Bhandari for £1.9 million and sold in 2010 for the same amount despite incurring additional expenses of approximately £65,900 (Rs 61 lakh) on its renovation.

“This gives credence to the fact that Bhandari was not the actual owner of the property but it was beneficially owned by Vadra who was incurring expenditure on the renovation of this property,” the ED had claimed before the court.

Arora was a key person in the case and he was aware of Vadra’s overseas undeclared assets, the ED had alleged.

Vadra has also been directed by the Rajasthan high court to appear before the ED again on February 12 in connection with another money laundering case. 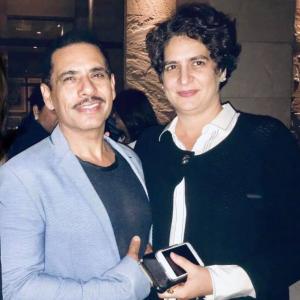