Opposition parties, though resigned to the fact that they lack the numbers to defeat or stall the bill in the two Houses, have decided upon different tactics that they would employ to highlight their reasons for opposing it. 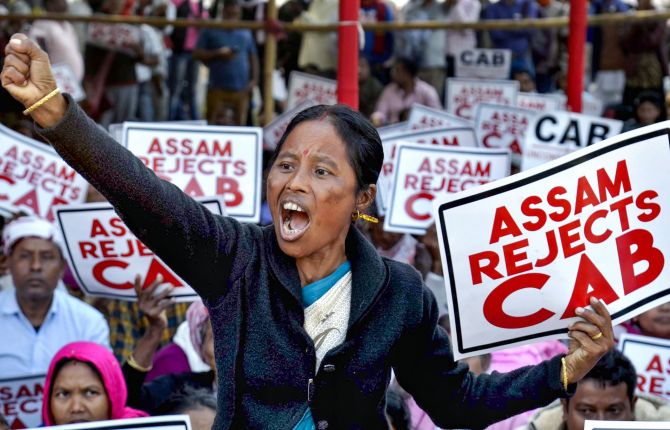 IMAGE: An activist of the Krishak Mukti Sangram Samiti raises slogans during a protest against the Citizenship Amendment Bill, in Guwahati. Photograph: PTI Photo

Home Minister Amit Shah will introduce the Citizenship Amendment Bill in the Lok Sabha today, and move that it be debated on the same day, the Lok Sabha's list of business released on Sunday evening stated.

The Bharatiya Janata Party-led National Democratic Alliance is comfortably placed to ensure the bill's passage not just in the LS, but Rajya Sabha as well.

The bill could come up for passage in the RS on Wednesday.

The bill seeks to amend the Citizenship Act to grant Indian citizenship to non-Muslim refugees from Pakistan, Bangladesh and Afghanistan escaping religious persecution there.

Opposition parties, resigned to the fact that they lack the numbers to defeat or stall the bill in the two Houses, have decided upon different tactics that they would employ to highlight their reasons for opposing it.

The primary argument would be that the bill goes against the letter and spirit of the Constitution.

Congress Lok Sabha MP Shashi Tharoor has said the passage of CAB will mark the definitive victory of Mohammed Ali Jinnah's thinking over that of Mahatma Gandhi's.

He said the exercise of granting citizenship on the basis of religion is a “cynical political exercise to single out and disenfranchise an entire community in India” and will reduce India to a “Hindutva version of Pakistan”.

Opposition members will point out that the bill violates the tenets of equality and religious non-discrimination enshrined in Article 14 and 15 of the Constitution.

The Trinamool Congress has given notices in both houses that the bill should not be introduced.

The Communist Party of India-Marxist has moved amendments that the references to specific countries and specific religions be replaced by a more encompassing clause stating that refugees “from (all) neighbouring countries” would come under its purview.

Currently, the bill mentions that members of all persecuted religions will be granted citizenship barring Islam.

Chief ministers of opposition-run states of West Bengal, Chhattisgarh and Punjab have said they oppose the bill, and do not want an National Register of Citizens in their respective states.

Opposition parties did not want to reveal whether they would vote against the bill or stage a walkout.

The Congress had walked out when the bill had come for discussion in the Lok Sabha in 2016.

It had eventually lapsed as the government did not bring it to the Rajya Sabha.

The Congress had also walked out on the bill to repeal Article 370 in the Lok Sabha, but had voted against it in the Rajya Sabha.

The Trinamool Congress had walked out in the two Houses on Article 370.

Opposition members will also argue that the bill will introduce multiple rules for citizenship, which is anti-constitutional; that it is anti-tribal,

- That of the 1.9 million left out in NRC in Assam included Hindus from Bengal, Maharashtra, Uttar Pradesh and other states

- That the NRC and the CAB are inextricably linked

- The question of "deemed citizens" who have spent years in India

- And finally that it is an attempt to divert attention from rising unemployment and economic slowdown.

BJP general secretary Ram Madhav said India is duty-bound to give citizenship to persecuted minorities from neighbouring countries as they are "victims" of the decision to divide the country on religious lines.

He said a similar legislation, 'Immigrants (Expulsion from Assam)' Act, was enacted in 1950 by the then Congress government led by Jawaharlal Nehru.

The Congress and its allies, like the Dravida Munnetra Kazhagam and Nationalist Congress Party, Trinamool Congress, Left parties, Samajwadi Party and Bahujan Samaj Party are opposed to the bill.

According to sources, opposition parties have reached out to the Biju Janata Dal as well since they believe the bill is “discriminatory” towards tribals.

The Shiv Sena is likely to vote with the government, as would regional parties like the Telangana Rashtra Samiti, the YSR Congress Party and others.