Converting the minimum support price regime to a floor price of auction on the national agri market (eNAM) portal and creating a contract farming institute can help solve the current impasse over the three new farm laws which are being opposed by farmers, says a report by SBI Research.

The report also suggests that instead of MSP as a price guarantee that farmers are demanding, the government could insert a quantity guarantee clause for a minimum of five years that procurement to production percentage of crops will be at least equal to last year's percentage with safeguards in exceptional events like droughts and floods.

This, the report said, can allay the concerns of farmers to a great extent.

Historical trend in grain procurement indicates that only 25-35 per cent of total wheat produce has been procured over the years, with largest procurement happening in Punjab and Haryana, it said.

In case of rice, the share is 30-40 per cent with significant procurement from Telangana, Punjab, Haryana and Kerala.

However, the report admits that converting MSP to a floor price of auction on the eNAM portal will not completely solve the problem as the current data shows that average modal prices in e-NAM mandis is lower than the minimum support price in all commodities except urad.

A third suggestion is to strengthen APMC market infrastructure.

Government data shows that monetary loss for cereals is almost Rs 27,000 crore due to harvest and post-harvest losses annually, while the same on oilseeds and pulses are Rs 10,000 crore and Rs 5,000 crore, respectively.

A similar institution must be be set up in India as small and marginal farmers should have the necessary wherewithal to deal with large buyers because globally initial success in contract farming has not been sustained anywhere as large firms at first attract small growers with favourable conditions but later tighten them, it said.

The report believes that the monthly income of farmers will go up by a sharp 35 per cent by just revisiting the current KCC norms.

The KCC scheme was introduced in 1998 by RBI and loans under the initiative are expected to be used by farmers for cash for their production needs and purchase of agriculture inputs.

As of March 2020, KCC loans aggregated to about Rs 7,09,500 crore to 6.7 crore active KCC card-users, which constitutes about 40 per cent of the total agricultural loans given by them.

The government recently passed three laws aimed at changing the way agricultural produce is marketed, sold and stored across the country.

The report also claims that the farmers' agitation is not due to end of the MSP regime but vested political interests as some states are concerned about the loss of revenue from mandi taxes and fees (ranging from 8.5 per cent in Punjab to less than 1 per cent in some states).

Punjab annually earns about Rs 3,500 crore from these charges. 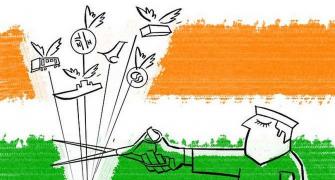