A grieving Mohammed Sahil waited anxiously at the GTB Hospital on Wednesday to collect the body of his father who suffered a fatal gun shot injury during the violence in northeast Delhi. 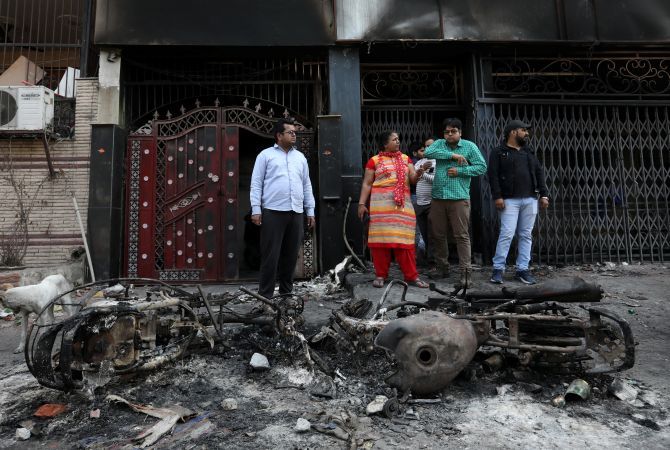 IMAGE: People stand next to the wreckage of motorcycles that were set on fire by a mob in violence-affected areas of northeast Delhi. Photograph: Rupak De Chowdhuri/Reuters

Sahil, 26, a resident of north Gonda area, says his father, Parvez Alam, 50, ran a garage and was trying to pacify people from both communities to not engage in violence.

"As he stood near the door of our home last night, a bulled hit him in the back, and he collapsed. We ran after we saw him on the ground," the weeping son recalled.

But, that was only the beginning of horror, says Sahil, who assisted his father in running the garage.

"We called 100 number for police but got no response, we tried emergency ambulance number, but again in vain. We then tried to reach out to police, but they did not help us," Sahil alleged.

The northeast Delhi resident said, he then requested a friend to 'lend me his scooty' to travel to the GTB Hospital, about 5-6 km from his residence.

"But, mobs were running amok in the streets, and my friend who accompanied me daubed a 'tilak' on my forehead so we could escape the fury of the crowd.

"We were fearing for our lives, and my father was bleeding profusely," the son recalled.

Sahil and his friend, who did not wish to be named, stood at the GTB Hospital, with blood stain on their clothes.

He died at the hospital after suffering profuse bleeding, Sahil said.

"We carried him (Parvez) on the scooty to hospital. And, this is the national capital, not a backward village. What is happening to our country?

"Hindus and Muslims have lived in peace in my neighbourhood, but politicians provoked people with inflammatory speeches, and it happened just before the violence too, not to mention during election campaigning," he rued.

At least 27 fatalities have been reported in the violence over the last few days, 25 at GTB Hospital and two at LNJP Hospital.

Over 200 people have been injured in the violence in various parts of northeast Delhi in the last few days.

GTB Hospital authorities said, post-mortem is being conducted and family members would be handed over the bodies after due formalities.

"People are fighting over religion and discriminating between a Hindu and a Muslim, and some of them label us as 'Pakistanis'. I was born on this soil and die here. It is my motherland too," an overwhelmed Sahil said.

Asked where would he bury his father, he said, "We are just waiting to get 'walid sahab's' (father's) body, then we will take it to Muzaffarnagar," he said.

"My father was born in Muzaffarnagar and migrated to Delhi. We had our garage initially in Civil Lines and then moved to Wazirabad. People knew my father, Hindus and Muslims, he always stood for social harmony," he said.

"But, all he got in return from society was a bullet in his back," Sahil said. 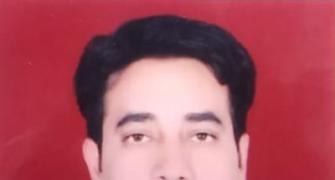 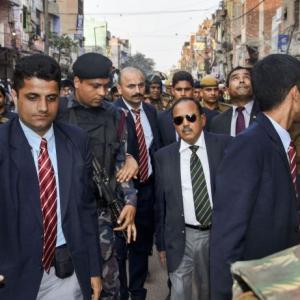