China continues to "coerce, intimidate and make claims" to the vast majority of the South China Sea even as its actions undermine the rules-based order and threaten the sovereignty of nations, United States Vice President Kamala Harris said here on Tuesday, asserting that America stands with its allies and partners in the face of these threats. 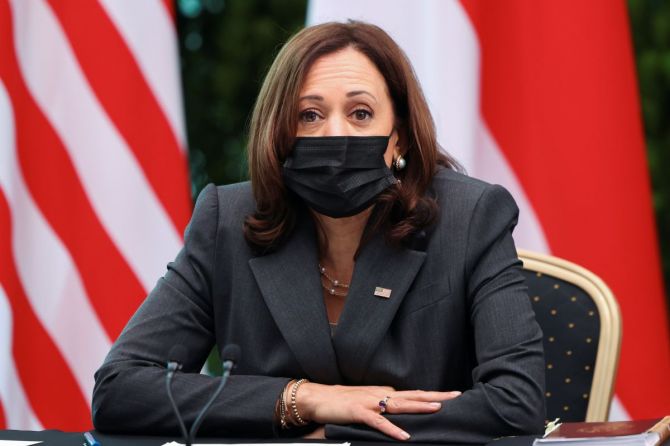 IMAGE: US Vice President Kamala Harris attends a roundtable at Gardens by the Bay in Singapore on August, 24, 2021. Photograph: Evelyn Hockstein/Pool/Reuters

Harris, in a major foreign policy speech as part of her three-day visit to Singapore, said America's vision includes the freedom of navigation which is vital to all.

These "unlawful claims" were rejected in 2016 by the Permanent Court of Arbitration, the US Vice President said, referring to its ruling on arbitral proceedings by the Philippines against China's maritime claims around the Spratly Islands and neighbouring reefs and shoals.

"Beijing's actions continue to undermine the rules-based order and threaten the sovereignty of nations. The United States stands with our allies and partners in the face of these threats," Harris said.

On July 12, 2016, the international tribunal on the South China Sea struck the worst blow to China's claims over almost all of the SCS, saying its much-touted nine-dash line has no legal basis.

The tribunal concluded that there was no legal basis for China to claim historic rights to resources within the sea areas falling within the ‘nine-dash line', the five-judge tribunal appointed by the Permanent Court of Arbitration based in The Hague adjudicating on the petition filed by the Philippines had said.

The US has been periodically conducting naval and aerial missions through the SCS to challenge China's claims.

For decades, China, which boycotted the tribunal questioning its legality, has been asserting that its emperors discovered the islands hundreds of years ago and have been exercising control over the area throughout history.

But its claims came into conflict with the Philippines, Vietnam, Malaysia, Brunei and Taiwan as they hardly have Exclusive Economic Zones (EEZ) provided by the UN Convention on the Law of Seas, which Beijing declined to recognise.

However, Beijing has not only remained defiant but also consolidated its claims over the area, building artificial islands backed by military installations fitted with missiles and an airport.

According to observers, Vietnam -- which has been a vocal opponent of China's territorial claims in the SCS -- has emerged as a key partner of the US though it is the same country from where America withdrew its troops in the 1970s, virtually conceding defeat.

In her speech, Vice President Harris stressed that Washington was not seeking to make countries choose sides.

"Our engagement in Southeast Asia and the Indo-Pacific is not against any one country, nor is it designed to make anyone choose between countries.

"Instead, our engagement is about advancing an optimistic vision that we have for our participation and partnership in this region and our economic vision is a critical part of that,” she said, calling the Indo-Pacific "critically important to our nation's security and prosperity."

Harris said much of the history of the 21st century will be written in the Indo-Pacific, and that the US will pursue a "free and open" Indo-Pacific that promotes the US interests as well as those of its partners and allies.

"Our partnerships will be grounded in candour, openness, inclusiveness, shared interests and mutual benefits," she added.

"What is happening in Afghanistan clearly shows us the definition of so-called rules, order of the US, that is, the US can wantonly want military intervention in a sovereign state but without taking responsibility for the suffering of the people of that country," Wang said in Beijing.

"The US can come and go as it wishes without consulting the international community, not even its allies. For the sake of America first, the US can wantonly smear, bully and suppress other countries without paying any price.

"This is the kind of order the US wants. The US is always trying to defend its selfish and hegemonic and bullying practices under the pretext of rules and order. But how many will buy this?” he said.

Vice President Harris' visit to Singapore is part of a diplomatic charm offensive by the Biden administration in Southeast Asia, a region that is crucial to the future prosperity and security of the United States, amidst China's aggressive actions in the region.

Speaking on Myanmar, Harris said: "I'd like to reiterate that we will continue to lead with our values. And that means respecting human rights at home and abroad.

"The United States remains deeply alarmed by the military coup in Burma (Myanmar). We condemn the campaign of violent repression, and we are committed to supporting the people there as they work to return their nation to the path of democracy."

She urged nations throughout the Indo-Pacific to join the US in this effort, saying she hopes the region will look back at this moment years from now and realise they joined together to "improve the lives of all people".

She said the US will also work multilaterally through long-standing institutions like the Association of Southeast Nations, "which remains central to this region's architecture".

China has militarised SCS to assert dominance: US 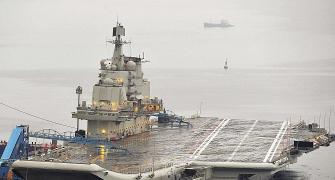 China's 2nd aircraft carrier to be deployed in SCS 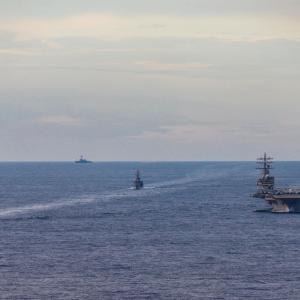 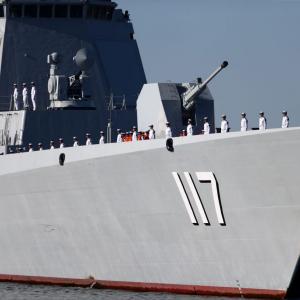