The hanging of Balwant Singh Rajoana, assassin of former Punjab Chief Minister Beant Singh was on Wednesday stayed by the Centre following a mercy petition.

Sources in the government said that the hanging, which was scheduled to be carried out on March 31, has been stayed following a petition filed by Shiromoni Gurudwara Prabhandak Committee, the Sikh religious body.

The sources said the decision to keep the hanging in abeyance was taken since a petition was filed in line with the guidelines followed in such cases.

The scheduled hanging of Rajoana had got the politics of Punjab in a turmoil with the ruling Akali Dal campaigning against his execution while its coalition partner Bharatiya Janata Party disfavouring such a course.

The state Congress leaders at a personal level had been favouring clemency.

Rajoana, a police constable and a close friend of another assassin Dilawar Singh Babbar, was the second human bomb to be used in case the first one failed to kill Beant Singh on August 31, 1995.

The President's office later sent his petition to the Union home ministry, which will also be decided in due course of time.

Under normal circumstances, the petition would be sent to the law ministry and Punjab government for comments after which it would be forwarded to the President with a view of the home ministry.

The President's office already has 18 mercy petitions to decide on. 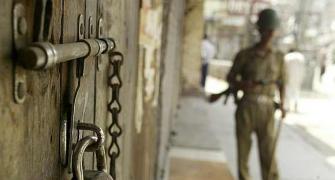