News
Business
Movies
Sports
Cricket
Get Ahead
Money Tips
Shopping
Sign in  |  Create a Rediffmail account
Rediff.com  » News » Gujarat records 61% turnout in phase 2, down from 70% in 2017

A moderate voter turnout of 60.94 per cent was recorded in the second and final phase of the Gujarat assembly elections covering 93 seats across 14 districts of north and central regions on Monday, the Election Commission said, a sharp drop from 70 per cent polling registered in these constituencies in 2017. 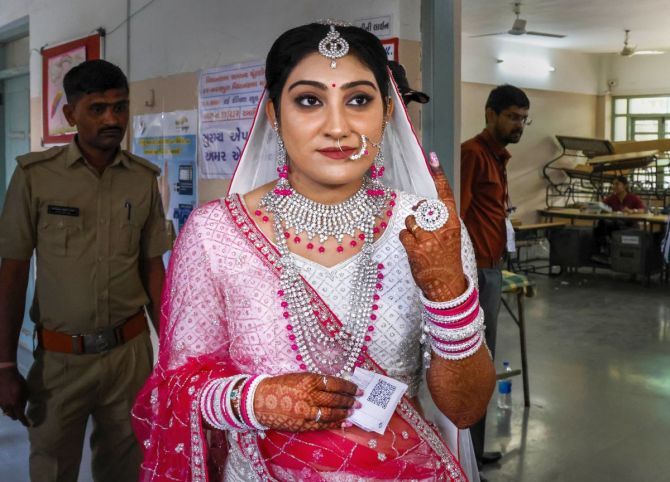 IMAGE: Ishani Raval, a 25-year-old bride, shows her finger marked with indelible ink after casting her vote during the second and final phase of Gujarat assembly elections, at a polling station in Ahmedabad. Photograph: PTI Photo

With this, voting for all the 182 assembly seats in Gujarat has been completed and counting of ballots will be taken up on December 8.

The first phase of elections on December 1 had covered 89 assembly seats and recorded 63.31 per cent polling.

Around 5,000 voters abstained from voting at six polling booths in three villages of Mehsana district over local issues, she told reporters.

Provisional voter turnout stood at 60.94 per cent in the second phase of elections covering 93 seats, said the EC. 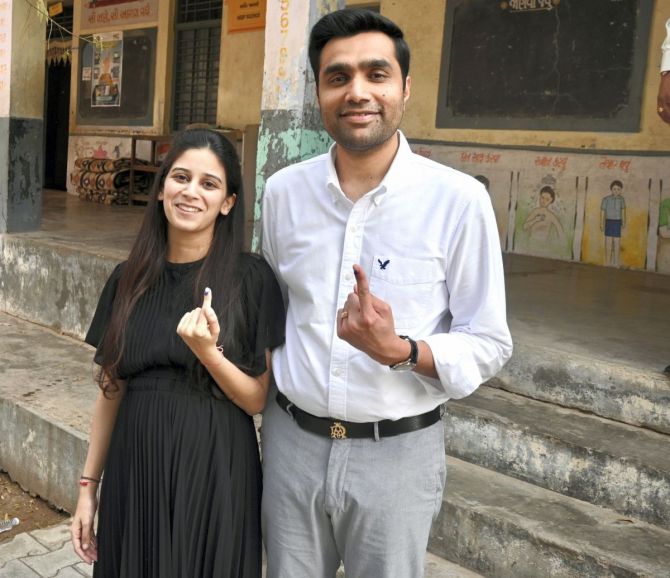 Gujarat had registered 68.41 per cent voting in the 2017 Assembly elections.

Among districts, Sabarkantha recorded the highest turnout at 68.33 per cent, followed by Banaskantha at 65.65 cent, showed the provisional figures released by the Election Commission.

Voting was lower than the average in Mahisagar at 54.26 per cent and in Ahmedabad district at 55.21 per cent. Another urban district Vadodara recorded 63.91 per cent voting, the poll panel figures showed.

Clashes broke out between different groups in Fatepura seat of Dahod district and Kalol of Gandhinagar district, EC officials said.

In Panchmahal district, a vehicle of Congress candidate Prabhatsinh Chauhan was vandalised, they said. 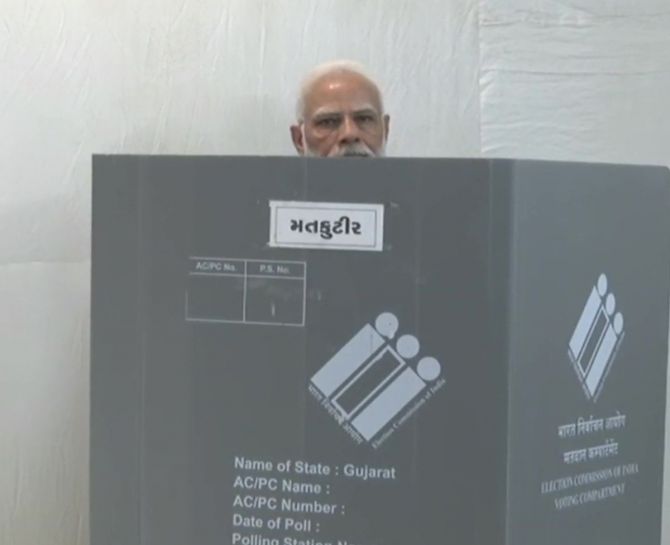 Bharathi said a total of 312 complaints regarding voting were received from different sources, including political parties, emails, call centres and on c-vigil app.

The electoral fate of CM Patel of the Bharatiya Janata Party (BJP) and 832 other candidates, including 285 independents, were decided in the second phase. 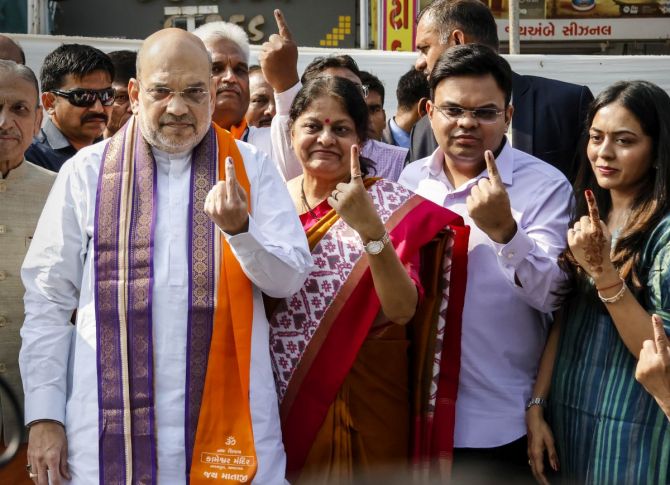 Isudan Gadhvi voted at a booth in Ghuma locality here. He is the AAP candidate from Khambhalia seat in Devbhumi Dwarka district where polling was held in the first phase on December 1.

Apart from CM Patel, BJP leaders Hardik Patel and Alpesh Thakor, and Jignesh Mevani of the Congress were key candidates in the second phase of polls. 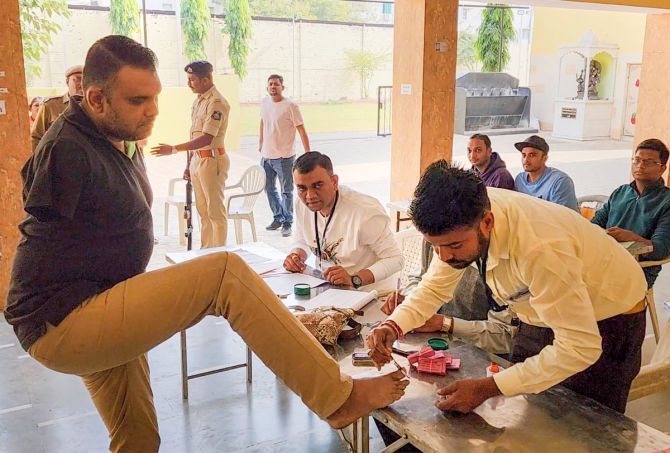 IMAGE:  A polling official inks the foot of Ankit Soni, a specially-abled voter, who lost his both hands in an accident, as he arrives to cast his vote in Kheda district. Photograph: PTI Photo

State Congress president Jagdish Thakor accused the Election Commission of "sitting in the lap of the BJP".

He said despite the Congress complaining of "slow voting" in Assembly seats won by the opposition party in 2017, the poll authorities did not resolve the matter.

"We complained of slow voting on Congress seats (won in 2017). We lodged a complaint but there was no resolution...It seems as if the Election Commission is sitting in the lap of BJP," he said, lashing out at the poll panel after casting his vote at Naroda locality in Ahmedabad city. 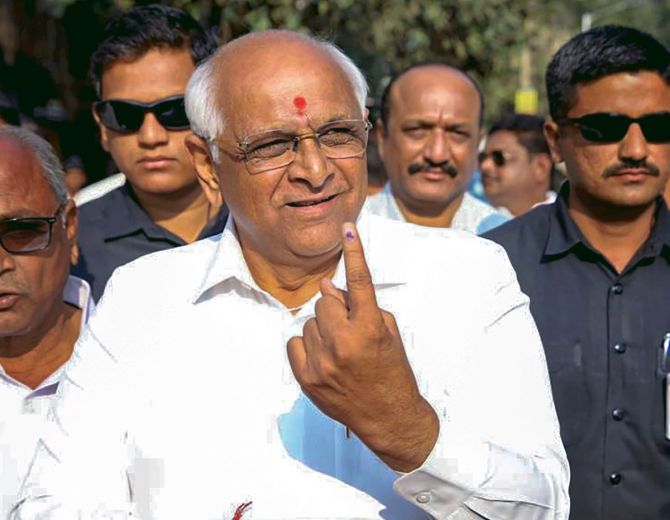 The ruling BJP and the Arvind Kejriwal-led AAP contested in all the 93 seats. The Congress fielded candidates in 90 seats and its alliance partner Nationalist Congress Party (NCP) in two Assembly constituencies covered under the second round.

Among other outfits, the Bharatiya Tribal Party fielded 12 candidates and the Bahujan Samaj Party 44.

In the 2017 assembly polls, the ruling BJP had won 51 of these 93 seats, the Congress 39 and independent candidates three segments.

Bed-ridden people, patients on oxygen support, senior citizens including centenarians, and transgender persons were among those who came out to vote in the elections.

Differently-abled Ankit Soni, who was born without arms, used his toes to sign a form at a polling booth and push the button on the EVM in Nadiad town of Kheda district.

Many citizens above the age of 100 went to their respective polling booths to cast vote in different parts of the state. 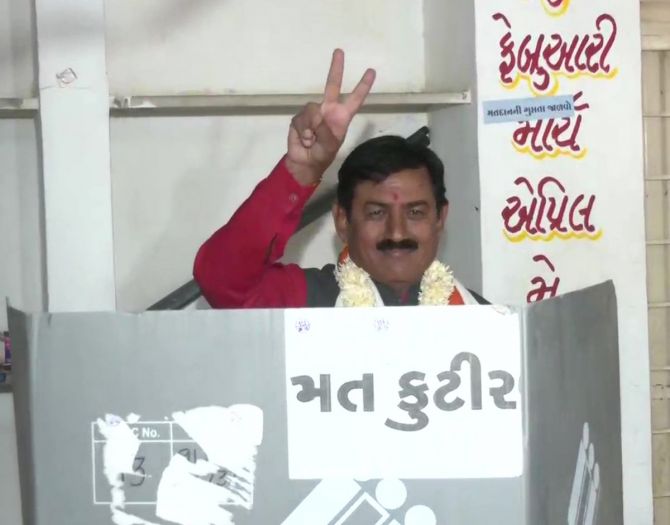 As many as 1,400 Muslim electors from Undhela village in Kheda district boycotted voting in protest against the public flogging of some men from the community by police two months ago, community leaders said.

Community leaders said all 1,400 Muslim voters of the total 3,700 voters in the village, situated in Matar taluka, joined the protest and didn't exercise their franchise.

"All Muslim voters from the village stayed away from the voting process as a mark of protest against the public flogging and the administration's refusal to punish the guilty. We gave a boycott call to express our anger at the one-sided action by the police. Till now, no policemen have been suspended for their misdeed," Maqbul Saiyad, a local Muslim leader from Undhela, claimed.

"As per the Returning Officer's report, no such incident has taken place. As per our record, 43 per cent of voters did turn up in Undhela to vote today," said Bachani. 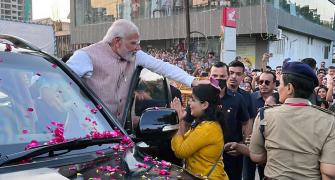 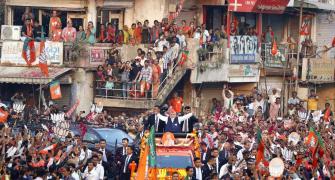 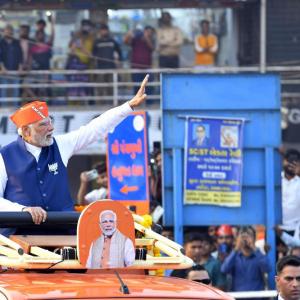 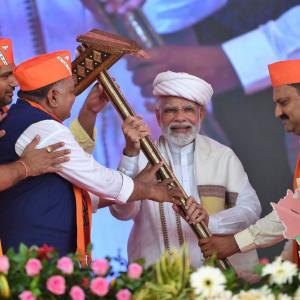