Hours after a Bharatiya Janata Party spokesperson's tweets on an alleged Congress 'toolkit' on the Centre's COVID-19 response were labelled as 'manipulated media', the government on Friday asked Twitter to remove the tag, saying the social media platform cannot pass judgment on a matter under investigation.

The Ministry of Electronics and IT wrote "a strong communication" to Twitter registering objection to the use of 'manipulated media' tag on certain tweets, sources said.

The communication referred to tweets by BJP spokesperson Sambit Patra as one "made by Indian political leaders" and went on to state that they were in "reference to a toolkit created to undermine, derail and demean the efforts of the Government against COVID19 pandemic."

It asked the microblogging platform to remove the 'manipulated media' tag as the matter is pending investigation before law enforcement agency.

Sources said the government has also made it clear that the social media platform cannot pass judgment while the matter is under investigation.

The sharp rebuke came after Twitter labelled as "manipulated media" a tweet by Patra on the alleged toolkit prepared by the Congress to target the Modi government on its handling of the COVID-19 pandemic.

The government has asserted that investigation will determine the veracity of the content and not Twitter, and asked the microblogging platform not to interfere in the investigation process.

In its communication to Twitter, the ministry has stated that a complaint has already been made by one of the concerned parties before the local law enforcement agency questioning the veracity of the toolkit and the same is under investigation.

While the local law enforcement agency is undertaking the investigation to determine the veracity of the 'tookit', Twitter has unilaterally drawn a conclusion in this matter and arbitrarily tagged it as 'manipulated media', government sources said.

The ministry has termed such unilateral action by Twitter as an effort to influence the fair investigation process and a clear overreach, which is totally unwarranted.

The ministry further stated in its communication that Twitter unilaterally chose to go ahead and designate certain tweets as 'manipulated', pending investigation by the law enforcement agency.

Such action not only dilutes the credibility of Twitter as a neutral and unbiased platform facilitating exchange of views by the users but also puts a question mark on Twitter's status as an "intermediary", they said.

Twitter says it "may label Tweets that include media (videos, audio, and images) that have been deceptively altered or fabricated."

Patra's tweet had posted a document and said, "Friends look at the #CongressToolKit in extending help to the needy during the Pandemic! More of a PR exercise with the help of Friendly Journalists & Influencers than a soulful endeavour.Read for yourselves the agenda of the Congress".

Last month, Twitter and other social media platforms removed about 100 posts and URLs after the government asked them to remove content that was critical of the handling of the current medical crisis or spreading fake news around the pandemic.

Earlier this year, more than 500 accounts were suspended and access to hundreds of others in India blocked after the government ordered the microblogging platform to restrain the spread of misinformation and inflammatory content related to the farmers' stir.

The Congress on Friday said its stand on the 'Covid toolkit' issue stands validated after Twitter used the 'manipulated media' tag for BJP leaders Sambit Patra's tweets on the alleged Opposition party document on how to target the Centre over its COVID-19 handling.

Congress leader K C Venugopal said, "The Congress stand has been validated by Twitter's action itself. What the Congress has been telling for the last so many days and years about the BJP's false propaganda and spreading lies is actually validated by this single incident."

"We will take note of it and will take further action," he said, when asked about the Congress' follow-up action.

Party spokesperson Pawan Khera said the world should see how India's ruling party is "trying to create manipulative media during a pandemic without fulfilling its own duty".

"The people should see this," he said. "The Congress has pledged that it will not ignore such things, as they (the BJP) have been doing so in the past too. We will reply emphatically."

He also said that the party would continue to pursue action on a police complaint against BJP chief JP Nadda, Union minister Smriti Irani and Patra, among others, for "peddling a false narrative" through social media.

"The law will take its own course. We will continue with the legal remedies," Khera said, when asked about the future of Congress' police complaint.

The Congress leader said it will also pursue with Twitter for further stricter action against the BJP leaders.

The Congress had on Thursday written to Twitter asking it to permanently suspend the accounts Nadda, Irani, Patra and other BJP leaders for allegedly "spreading misinformation and unrest in the society".

Their communication to the social media site had come two days after they filed a police complaint against the BJP leaders after they tweeted a so-called 'toolkit', attributing it to the Congress, on how to target the Modi government over its handling of the Covid-19 pandemic.

The Congress has said the document was "forged".

While the Congress was seeking permanent suspension of the Twitter handles of the four BJP leaders, the micro-blogging site labelled as "manipulated media" Patra's tweet about the alleged toolkit. 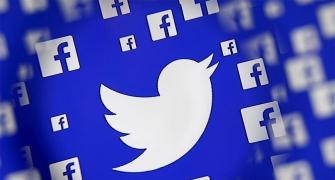