Amid speculation that he would return to Goa politics, Defence Minister Manohar Parrikar on Saturday kept everyone guessing by describing himself as a "party man" who will work as per the directions of party leaders. 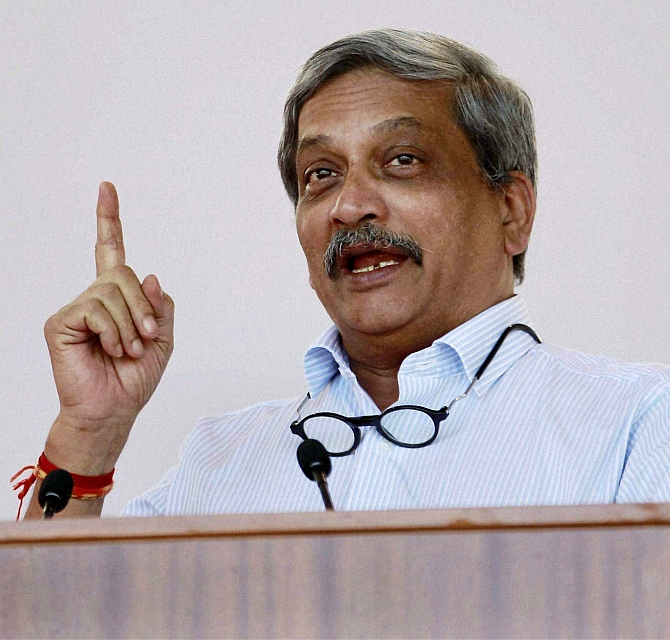 However, he went on to add that he was missing "Goan food in Delhi" and people can derive any meaning out of his remarks.

"Iske bareme apko Aamitji ne kaha hai, jo kaha hai utna hi mai wapas repeat karoonga (I will repeat what Amit Shah has said on this issue). I am a partyman, let the party decide," he told reporters when asked if he would be the next Goa CM, if his party is voted to power.

When pointed out to his remarks that he likes Goan food, Parrikar responded, "I have lost four kg in Delhi, the main reason is food."

"I have not said anything I only said I like Goan food. You can derive any meaning out of it," he commented.

Parrikar, who was amongst the early voters at the polling booth in Panaji constituency, expected the polling to cross 85 per cent mark this time.

"Initial reports indicates beginning of a very good turnout. I expect good voting this time like last time when there was 83 per cent voting. It may even exceed 85 per cent this time," Parrikar said.

"Goa votes very heavy and this is a speciality that BJP has inducted in the politics of Goa to increase the voting. Initial indications are good," he said.

Parrikar said BJP expects the mandate with two third majority. Pollsters are saying that it would be a BJP majority. Everyone is predicting 22-25 seats, I will get better than that," he added.

Noting that it is a four-corner fight in the state, Parrikar quipped "Out of four corners, three are very weak."

"Except for four-five seats, MGP led combine does not pose any threat. This election will have 85 per cent voting. BJP has contacted each voter four to five times. People are very enthusiastic to give certificate to the good government."

He said that this time BJP will be main focal point around which other parties are revolving.

Responding to a question about his camping in Goa for the campaign, Parrikar shot back, "Is it wrong to campaign? In democracy if you fall all the laws and guidelines, you can campaign."

"I will be also campaigning in Uttarakhand, UP and even civic polls of Mumbai. Goa is my home. I am not criticising anyone for going to his home and campaigning there," he said.

To a question on recent Election Commission of India notice to him over his statement on bribery, Parrikar said he had asked voters not to take bribe.

"Have you heard my statement? I have put a question mark. In Konkani 'marap' is a question mark and 'mara' means do," he said quoting his speech in St Cruz constituency.

"I had put up a question to the voters, will you vote for money. If you listen to the CD carefully and ask some person who knows Konkani, he will tell you I have posed question asking will you accept the money," he said.

"By changing one word you change the meaning of the sentence," Parrikar added.

On the EC notice, the minister said "I have told them the order which you have given to me does not even have authentication. First they had put it on the website and in the evening they gave me an order when I asked for it."

The election is being closely fought by major political forces -- BJP, Congress, AAP and MGP-led alliance, who have been campaigning in the coastal state for last two months.