IMAGE: Security personnel look at a poster of protesters suspected to have incited vandalism during protests against CAA and NRC, in Lucknow, on Friday. Photograph: Nand Kumar/PTI Photo

A row erupted after a video showed a top police officer in Meerut saying that protesters who had hit streets against the new citizenship law can 'go to Pakistan', drawing sharp criticism from various quarters with Congress leader Priyanka Gandhi Vadra on Saturday accusing the Bharatiya Janata Party of infusing 'communal poison' in institutions.

The incident purportedly took place on December 20 in Lisari Gate Police Station area, when Meerut Superintendent of Police Akhilesh Narayan Singh was speaking to some locals in a narrow lane after violent protests and clashes in the city last week left five people dead. 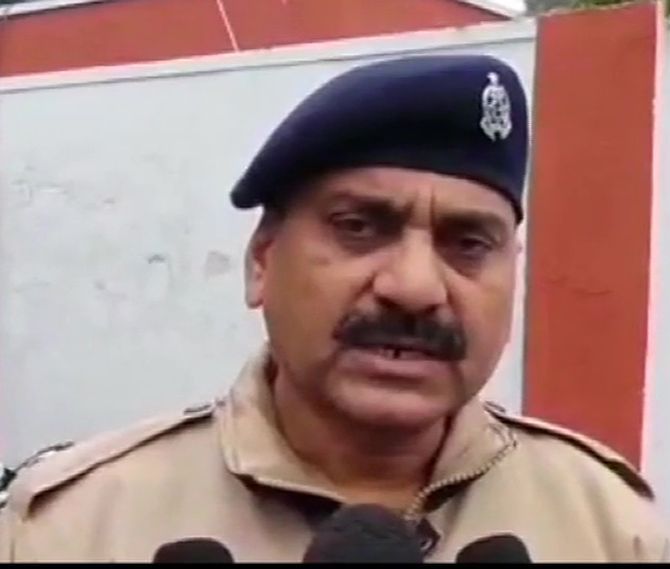 IMAGE: SP Akhilesh Narayan Singh claimed that he had made the statement to a group of people who were raising slogans in support of Pakistan. Photograph: ANI

Singh, however, said he made the remark for people shouting slogans in support of Pakistan during the protest.

"I advised them to go to the place in support of which they were raising slogans."

In the 1.43 minute-long video, Meerut Superintendent of Police Akhilesh Narayan Singh can be seen talking to three men in a narrow lane along with other police personnel.

Reacting to the incident, Congress general secretary Priyanka Gandhi said the Constitution does not allow use of such language for any citizen.

'India's Constitution does not allow use of such language for anyone. And when you are an official occupying an important post, your responsibility increases,' she said in a tweet in Hindi and shared a related news video.

She also said, 'BJP has infused communal poison in institutions to an extent that officials have virtually no respect for the oath of the Constitution.'

Priyanka Gandhi was in Lucknow to attend the 135th foundation day of Congress.

Some people there were raising slogans in support of Pakistan and were distributing objectionable pamphlets in support of the Popular Front of India (PFI) and the social Democratic Party of India (SBPI), he said.

After receiving information about it, SP City and DM City went to the spot and told the people that they can leave if they want to, Kumar said.

He termed the video was part of a conspiracy as it was being circulated a week after the incident, when the situation was peaceful in the area.

Samajwadi Party MLA Rafiq Ansari hit out at the top officer, saying he should exercise restraint and not make unconstitutional remarks.

The people he was talking about were also the residents of India, he said.

Five people were killed in violence in the city during protests against the amended citizenship act.

Protesters had set over two dozen police vehicles on fire and pelted stones.