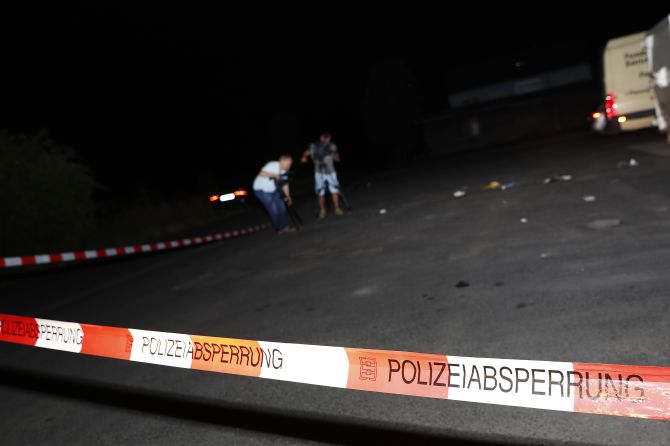 The 17-year-old Afghan asylum-seeker who went on a rampage with an axe and a knife on a German train on Monday wanted to avenge his friend’s death by ‘killing infidels’, investigating officers said on Tuesday.

The teen had received a word that a friend had died in his home country days before. He vowed in a note that he would ‘take revenge on these infidels’.

The man, who injured at least 20 passengers on the train -- three of them seriously – was shot and killed by the SWAT team of German police.

Although the Islamic State group has claimed responsibility for the attack, the authorities say, so far, they have found no direct links to the group and believe the suspect was self-radicalised.

Investigator Lothar Koehler was quoted as saying by the Associated Press that the teenager’s motivation appeared to be Islamic extremism based upon a passage, found among various notes in his apartment, which read: ‘Pray for me that I can take revenge on these infidels and pray for me that I will go to heaven.’

On Monday night, the suspect had boarded the regional train after 9 pm near the Bavarian city of Wuerzburg with an axe and knife concealed in a bag, according to Bamberg prosecutor Erik Ohlenschlager. He said that the suspect, whose name was not released, had learned on Saturday that a friend had died in Afghanistan.

On the train, he initially encountered an employee from the asylum shelter where he had lived until two weeks ago when he moved in with a foster family, and when she said something to him he didn’t respond but left for another train car, Ohlenschlager said.

He then concealed himself in a bathroom, and armed himself with his weapons.

“Then, without warning, he attacked the passengers using great force on their bodies and their heads,” Ohlenschlager said.

In an emergency call from the train, the suspect could be heard in the background shouting ‘God is great,’ as he hacked and slashed.

Witnesses said the interior of the train was covered with blood and looked ‘like a slaughterhouse’, German news agency DPA reported.

About 30 passengers were on the train at the time. More than a dozen were treated for shock.

After the train made an emergency stop, he fled and a few hundred meters away encountered two women walking a dog. He attacked one from behind, saying ‘I'll finish you’. He hit her at least twice in the face with the axe.

Shortly after, he was killed by a police SWAT team that had been in the area on another mission but had been redirected.

IMAGE: The spot where the Afghan man was shot dead by the police after attacking passengers on a train with an axe near the city of Wuerzburg, Germany. Photograph: Kai Pfaffenbach/Reuters