The visit of US Defence Secretary Robert Gates to New Delhi - the first by a top Obama administration member after the State Visit of Prime Minister Manmohan Singh here last year - is all set to bolster Indo-US ties, a leading American expert on South Asia has said.

"Following on the heels of the Indian prime minister's successful visit to Washington last year,Gates' visit will sustain the momentum in US-India ties and prepare the way for a potential visit by President Barack Obama to India this summer," said Lisa Curtis, Senior Research Fellow for South Asia in the Asian Studies Center at the Heritage Foundation, a Washington-based think tank.

"As the Taliban assaulted Kabul, Defence Secretary Gates made an important visit to India, the South Asian giant whose partnership is critical to stabilising the region and checking terrorism trends that jeopardize world security," she said. Curtis said Gates will also take the temperature on India-Pakistan relations more than one year after the Lashkar-e-Taiba (LeT) terror attacks in Mumbai. In a sign that India may be considering seeking a thaw with Pakistan, the Indian Foreign Minister last week telephoned his Pakistani counterpart, she noted.

However, the slight opening toward Islamabad's civilian leadership does not appear to signal optimism about the Pakistani military's willingness to crack down on the LeT, she said.

"Rather, it may demonstrate that New Delhi seeks to prevent a further deterioration in ties and to avoid appearing unreasonable at a time when Pakistanis themselves suffer almost daily terrorist attacks," Curtis said.

New Delhi, she said, still holds that the Pakistani military could be doing more to crack down on terrorists that attack India, an assessment shared by many US officials and that appears to have been borne out by the investigation of the David Headley case, which has confirmed links between the Pakistan military and the LeT.

"The opening toward Islamabad also will not preclude Indian leaders from expressing their disapproval of US military aid to Pakistan on grounds that the equipment is aimed at strengthening Pakistan's ability to counter India, not terrorists," Curtis said.

"Russia still provides 80 per cent of India's military hardware, but the US is beginning to break into the rapidly expanding Indian defence market," she said. "Over the last two years, India has purchased over $3 billion in military equipment from the US, including eight maritime reconnaissance aircraft and six C-130J Super Hercules transport aircraft.

The two countries are moving toward completing their largest defence transaction yet (about $2.5 billion) with India's potential purchase of ten strategic airlift aircraft," Curtis said.

Source: PTI© Copyright 2021 PTI. All rights reserved. Republication or redistribution of PTI content, including by framing or similar means, is expressly prohibited without the prior written consent.
Related News: Lisa Curtis, Robert Gates, India, US Defence, New Delhi
SHARE THIS STORY
Print this article
US Defence Secy Gates to visit India
US alive to dangers around India: Krishna
UK not same without India, Indians: Brown 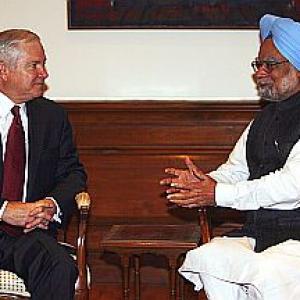