Cold wave tightened its grip in Kashmir Valley on Saturday as the night temperature plummeted to the season's lowest in many places, resulting in the freezing of fringes of the famous Dal Lake for the first time this winter. 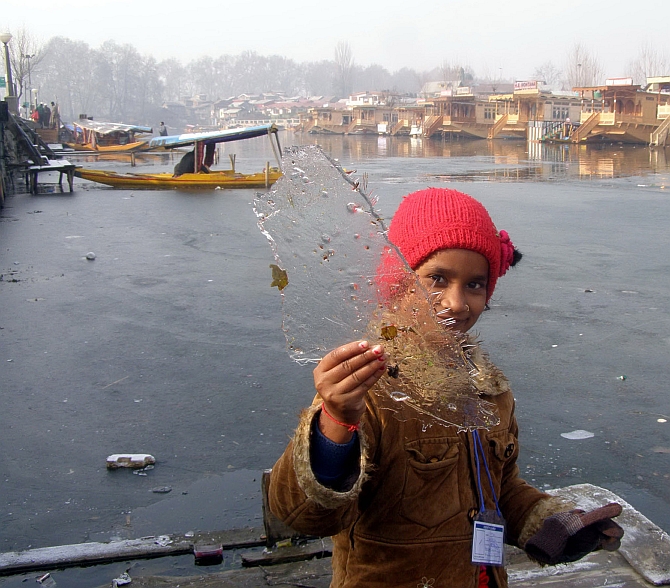 The summer capital Srinagar witnessed the coldest night of the season as the mercury settled at the low of minus 4.5 degrees Celsius, a spokesman of the MeT Department said.

He said the dip in the temperature resulted in the freezing of fringes of Dal Lake here and many other water bodies as well as drinking water taps.

Leh in Ladakh region also experienced the coldest night of the season as the temperature plummeted to settle at minus 11.9 degrees Celsius. The region was the coldest in Jammu and Kashmir.

The nearby Kargil town recorded the minimum of minus 8.2 degrees Celsius, the spokesman said.

He said Kupwara, in north Kashmir, recorded a low minus 5.1 degrees Celsius, down from minus 4.9 degrees Celsius on Friday. This was the lowest recorded temperature of the season so far in the border town.

Pahalgam hill resort in south Kashmir recorded a low of minus 3.0 degrees Celsius.

The spokesman said Qazigund town in south Kashmir registered the minimum of minus 3.2 degrees Celsius, while the nearby Kokernag town recorded the low of minus 2.0 degrees Celsius.

The MeT Office forecast isolated rains in the plains and snowfall in the higher reaches for at least two days from Saturday night.