From a comedian to Punjab chief minister, Bhagwant Mann has seen a phenomenal rise in a political career of just over a decade. 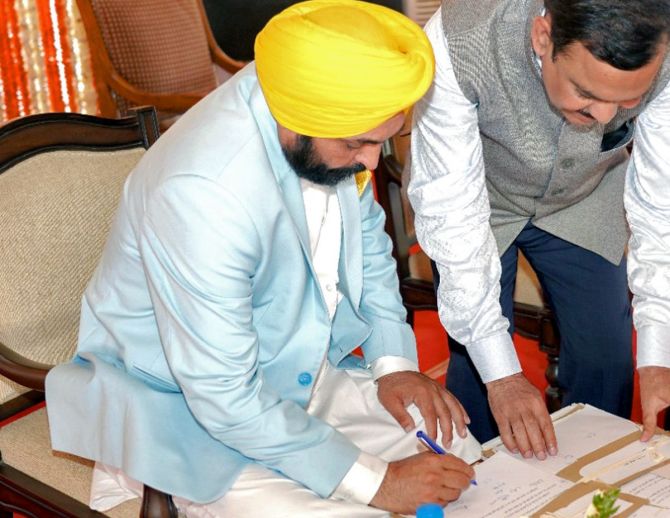 At the mega public event, Mann accepted a huge burden of expectations -- his Aam Aadmi Party had swept the assembly polls, winning 92 of the 117 assembly seats.

How he runs the show in Punjab will also have a bearing on AAP's fortunes in the coming years as the party seeks to expand its footprint further across the nation.

Mann, 48, was elected twice as a member of Parliament from Sangrur parliamentary constituency before his legislative assembly debut this time. He resigned as MP on Monday.

He now becomes the first non-Congress and non-Akali leader to become the CM after the reorganisation of Punjab in 1966.

Inviting people of Punjab to his oath-taking ceremony, Mann told them it will be their government.

The AAP state unit president was the first choice of over 90 per cent of the 21 lakh callers.

He fought the polls from Dhuri, an assembly segment in his Sangrur parliamentary constituency, winning by a margin of over 58,000.

Born in Sangrur's Satoj village in October 1973, Mann enrolled for a B Com degree from Shaheed Udham Singh Government College in Sunam in the same district.

He didn't complete the course, but college gave him a chance to take part in several youth festivals.

He later brought out comedy videos and music albums, including the very popular 'Jugnu Mast Mast' and 'Kulfi Garma Garam'.

Appearing in 'The Great Indian Laughter Challenge' was a high point in his career as an entertainer.

Navjot Singh Sidhu, who has now resigned as the Punjab Congress chief, also happened to have made several appearances on the TV show.

Mann's political career began in 2011 with the Manpreet Singh Badal-led People's Party of Punjab, an offshoot of the Shiromani Akali Dal. The PPP was to merge later with the Congress.

Next year, Mann fought from the Lehra assembly constituency in Sangrur as a PPP candidate but lost to senior Congress leader Rajinder Kaur Bhattal.

In 2014, Mann joined the AAP and contested against Akali heavyweight Sukhdev Singh Dhindsa for the Sangrur Lok Sabha seat.

He won by over two lakh votes and the AAP itself went on to win four Lok Sabha seats in Punjab.

But the AAP won 20 seats in the Punjab Assembly, ending up as the state's main opposition party. Mann was made its state unit president.

He resigned from the post in 2018 after Kejriwal apologised to Akali leader Bikram Singh Majithia in a defamation case but was back in the AAP-fold soon.

Mann won the Sangrur seat again in the 2019 Lok Sabha polls with a margin of over one lakh votes.

During his career, Mann has been hounded by accusations that he has a drinking problem.

In 2016, the then AAP MP Harinder Singh Khalsa complained against him to the Lok Sabha Speaker, seeking a change in his seat.

He alleged that Mann, who sat next to him, reeked of liquor.

At a 2019 rally in Barnala, in the presence of Kejriwal and his mother, Mann vowed to give up liquor.

Mann had then accused his political rivals of defaming him by portraying him as a born drunkard. 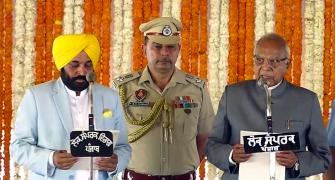 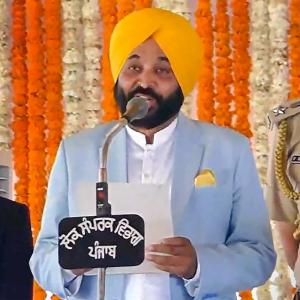 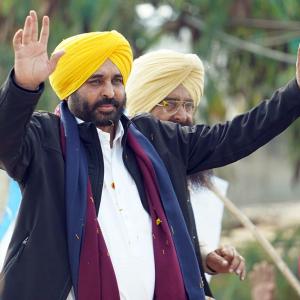