Tucked away in a calm suburb of Kelambakkam, the air in the Rohingya Muslim refugees camp was abuzz with preparations by several men for making porridge to break the daily Ramzan fast. 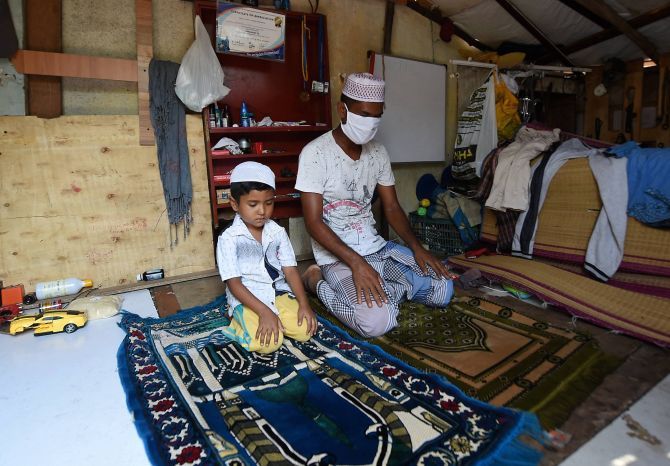 Sporting an infectious smile, Mohammed Ayub welcomes a neighbour even as he breaks up vermicelli noodles from packs strewn around and drops them in a huge vessel with boiling water as another man places firewood in the makeshift earthen stove.

A 'cutting master' (butcher) in a nearby chicken-cum-mutton outlet, 22-year-old Ayub says he thanks God to pray and fast peacefully in the holy month of Ramadan after a “bitter” phase in his native land of Myanmar.

"Tamil Nadu bahut pasand hai (I like Tamil Nadu very much),” he says as his curious children look on.

Ayub is one among those who came to Tamil Nadu in 2016 following a stay in Jammu and Kashmir for some time.

They had reached the hill territory following a perilous journey from Myanmar.

"I am happy and thank God for having a job even during the days of the lockdown. The stall I work is open till afternoon from 9 am and I earn about Rs 10,000 and try to make ends meet," he says with a laugh when asked if his earnings have been affected due to curbs.

A cyclone shelter building at Kelambakkam, which was recently given a fresh coat of paint, is the current home of nearly 100 Rohingyas who belong to 18 families.

The neighbourhood is on the way to Mamallapuram, about 25 km from Tiruvanmiyur in south Chennai.

While some Rohingya men work as butchers, some are helpers in restaurants and others do odd jobs like delivering goods on their fish cart.

The refugees have registered with the Foreigners Registration Office in Kanchipuram and have a residential permit issued by the authorities.

Yearning for relief from the sweltering heat, while several men have bath in an open enclosure in front of the building , Yusuf, a delivery man in the local market, moves his tricycle cart to a nearby lane to carry out repairs.

"There was no work for more than a month," Yusuf says.

Asked how he manages, he says, "It is difficult, we somehow tackle."

Trying to fix glitches in the engine, he hopes that with the easing of curbs, he will now find work.

The 28-year-old man, a father of a boy and girl, says they were however spoilt for choice when it came to essential commodities like cooking oil, pulses, rice and wheat through the lockdown period since March 24 evening.

"Koi farak nahi karta (no one differentiates),” he says and recalls the support they got from the government authorities and the local people, "be it Muslims or Hindus," to keep them going without hassles.

"We got rice supplies from the (Shirdi Sai) Baba temple (in the vicinity) as well. We are happy everyone lends us a helping hand," says Yusuf.

Not surprisingly, the bonding between the locals and the refugees is too striking to miss as Yusuf's wife combs the hair of an 'akka' (elder sister; a neighbour) Kalaichelvi, beneath the shade of a tree while having a friendly chat.

Kalaichelvi praises them for their hard work and says some well-to-do Muslims even gifted motors (engines) to the Rohingya men after seeing them slog.

"They now have motorised tricycles which makes their work easy," she says.

The Rohingyas say the government run primary health centre bang opposite the camp is a boon for them since consultation, diagnosis and medicines are free of cost and the seven pregnant women are periodically taken care of.

Recently, when some of them arrived after visiting their relatives in other states, there was a "concern about the probability of them having contracted coronavirus."

Assuaging concerns, authorities got them admitted to the Chengelpet government medical college hospital quickly where they tested negative for the contagion.

"We were relieved," recall the inmates.

Meanwhile, as trucks meander on the road, men taking bath in the open with towels around their waist discreetly ask Yusuf if there was anyone 'nearby' and the catch lies therein.

Barely covered with odd material like frayed clothes and strings, the open place for bath about 10 to 12 feet away from the busy main road and is a pointer to their living conditions.

There are two restrooms in the 'pucca' building, given the number of occupants, it is far from adequate.

The building used by the refugees is located on a road that serves as a link between the GST Road on the one side and the Old Mahabalipuram Road on the other, which are two key arterial roads that provides connect to the core city.

For nearly 100 people, including about 40 children, the ground plus one building is cramped, where curtains and bedspreads serve as walls between families.

Such a situation has prompted some families like that of Yusuf to move away and put up shacks on the open ground abutting the building.

Also, they use the open ground for cooking in view of lack of space.

During the rainy season, the ground is filled with water.

Rohingyas say they will be even more grateful to the government if the authorities could consider an alternative site for them or improve amenities here.

When asked, local officials told PTI, "From day one of their arrival here, the government has ensured that they have a proper place (to stay) and don't go hungry.

“Refugees are given all essential commodities and now they have supplies that will last for two months....also, periodically the premises is inspected to redress grievances."

On their living conditions, they concurred that it needed improvement, adding that steps were being taken to address concerns.

"Improvement is needed in some other localities as well and not only there... The government is committed to everyone's welfare," they said.

The pretty children, bubbling with enthusiasm, are, however, not worried about anything and go around playing at the tree lined roadside near their place of dwelling. They go to the local government run school and are fluent in Tamil.

Those like Rafiq Alam, a helper in a restaurant and who has some family members in Bangladesh and Myanmar, are more worried about the chances to meet and live with them again than the lockdown difficulties.

As Alam got ready to leave to break the fast and offer prayers, a gentle evening breeze wafted the pleasant smell of the hot porridge waiting to be served. 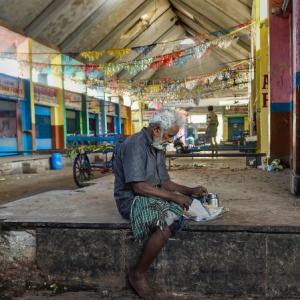