News
Business
Movies
Sports
Cricket
Get Ahead
Money Tips
Shopping
Sign in  |  Create a Rediffmail account
Rediff.com  » News » Modi asks ministers to be present in Parliament as per roster

Modi asks ministers to be present in Parliament as per roster

Prime Minister Narendra Modi on Tuesday cautioned Union ministers against skipping their roster duties in Parliament and said that he should be given names of all absentee ministers the same evening, sources said. 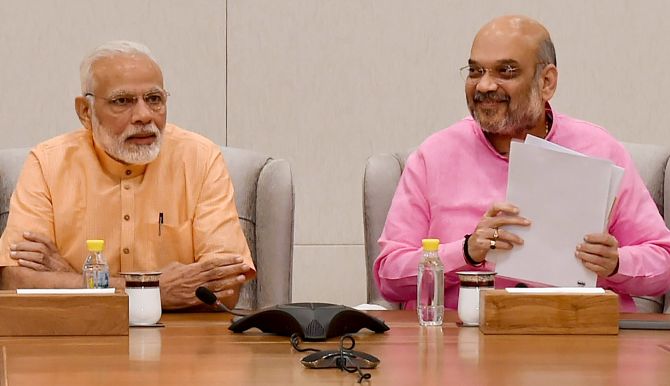 Modi's displeasure over the issue of absence of ministers came at a Bharatiya Janata Party's parliamentary party meeting, where he has in the past often pulled up MPs for absenteeism when it is in session.

This is the second time in the month, Modi has expressed unhappiness over the issue of absence of lawmakers in Parliament.

Opposition members have at times raised the issue of absence of ministers. BJP sources said there have been instances when Cabinet ministers or their deputies scheduled to be present in either Lok Sabha or Rajya Sabha were absent.

During the meeting, Modi also said the ongoing session can be extended, if required, to pass the government's legislative agenda, sources added.

Sources, however, stated that extension of the session, which is scheduled to end on July 26, is not on the government's agenda as of now.

Asking ministers to stick to their roster duties, Modi said they should carry out their work as assigned.

And that he should be given details of all the Union ministers who did not attend Parliament despite being asked to be present for the session same evening, sources said.

In a briefing after the meeting, Parliamentary Affairs Minister Pralhad Joshi told reporters that Modi asked BJP MPs to nurse their constituencies by playing a leading role in its development and advised them to take up a cause of human sensitivity like eradication of leprosy or tuberculosis and water conservation.

First impression is often the last impression, Modi told the party MPs, a large number of them first-timers, as he asked them to work passionately for the development of their areas.

The Prime Minister also told parliamentarians that they should take up a social cause or an issue of human sensitivity as a 'mission' apart from carrying out their duties as MPs so that they are remembered for their work.

Modi also asked them to help in eradicating disease like leprosy and TB while referring to work done by Mahatma Gandhi in this area.

Asked to inaugurate a hospital for lepers, Gandhi had said that he would rather be invited to put a lock on it, Modi noted.

Joshi said the Prime Minister also noted that India has fixed a deadline of 2025 for eradicating TB against the global deadline of 2030.

Modi also asked them to work with local authorities for development of their constituencies.

He referred to 'aspirational' districts, an official term for underdeveloped districts, and asked them to coordinate with authorities to boost their progress.

There is a "healthy competition" among authorities for developing these districts and MPs should work with officials to ensure development, Modi said.

The prime minister said MPs can also associate themselves with animal welfare. Many countries have successfully controlled foot and mouth disease but it remains an issue in India, he added.

During the meeting, BJP working president J P Nadda briefed about the party's ongoing membership drive, with Modi asking MPs to join the campaign which, he added, has received good response from people.