At least 52 people were killed and scores wounded as a massive fire overnight engulfed a multi-storied food and beverage factory on the outskirts of Bangladesh's capital, officials said on Friday. 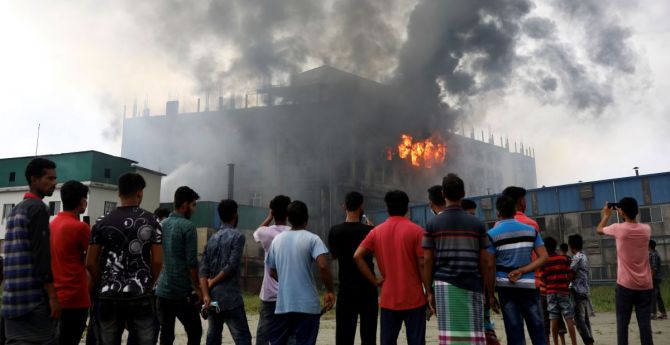 IMAGE: People look on as flames rise after a fire broke out at a Hashem Foods Ltd factory in Rupganj, Narayanganj district, on the outskirts of Dhaka, Bangladesh. Photograph: Mohammad Ponir Hossain/Reuters

Fire service officials and witnesses said the blaze broke out on Thursday evening and tore through the factory at the Rupganj area of Narayanganj.

Residents in the neighbourhood said most of the factory workers were teenagers.

“Fifty two people have been killed so far but we fear more bodies were inside and a search operation is underway,” a district administration official told reporters at the scene, nearly 25 kilometres east of Dhaka.

Fire service officials said 49 bodies have been recovered from the building while others succumbed to their wounds on way to or at hospitals, where many were being treated for critical wounds.

Television footage showed the fire was still burning at the six-story structure, emitting thick smoke while fire service officials said their search campaign continued alongside efforts to extinguish the blaze.

“The fire originated on the fourth floor where we nearly completed the search operation but we are yet to look for bodies on the fifth and sixth floors,” a fire service official told a private TV channel.

Scores of people were rushed to health facilities in Narayanganj and the capital Dhaka.

Hundreds of relatives of the factory workers waited outside the factory as the blaze continued to rage. 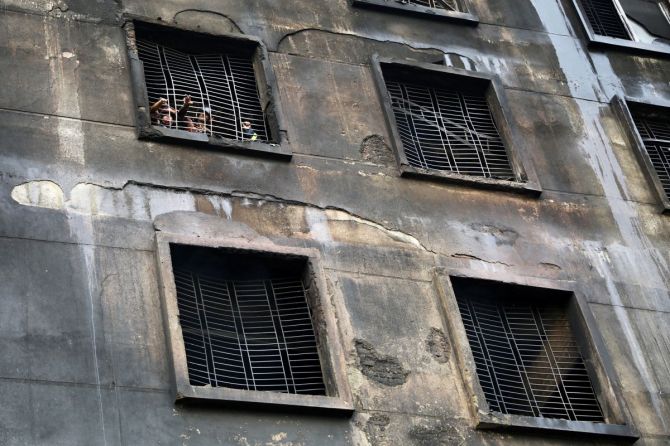 IMAGE: Firefighters wave hands to communicate after entering the factory building where a fire broke out and killed dozens in Rupganj, Narayanganj district, on the outskirts of Dhaka, Bangladesh. Photograph: Mohammad Ponir Hossain/Reuters

Officials initially reported only three deaths but the toll rose sharply after firefighters started recovering dozens of bodies of workers trapped in the upper floors of the plant.

“The exit point towards the rooftop of the building was locked when the fire broke out… many victims could have saved their lives if they could immediately take refuge there,” a fire service official said.

“Until the fire is doused, it is not possible to say exactly how much damage has occurred and the cause of the fire,” he added.

A five-member probe committee has been formed by the district administration to look into the incident.

Details of the cause of the fire, how many people were inside the factory and how many were missing were not immediately available.

Bangladesh has a tragic history of industrial disasters, including fire incidents at factories. In February 2019, at least 70 people died when an inferno ripped through Dhaka flats where chemicals were illegally stored. Another fire in Old Dhaka in a house also storing chemicals killed at least 123 people in 2010.

Bangladesh imposed tougher safety rules after more than 1,100 people died when a garment factory complex collapsed near Dhaka in 2013, known as the world's worst factory disaster. The shocking state of Mumbai's firemen 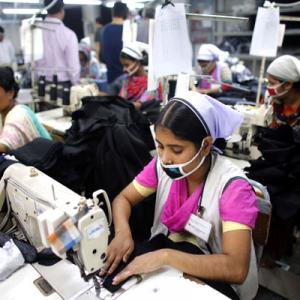 How textile KINGS weave a hold on Bangladesh