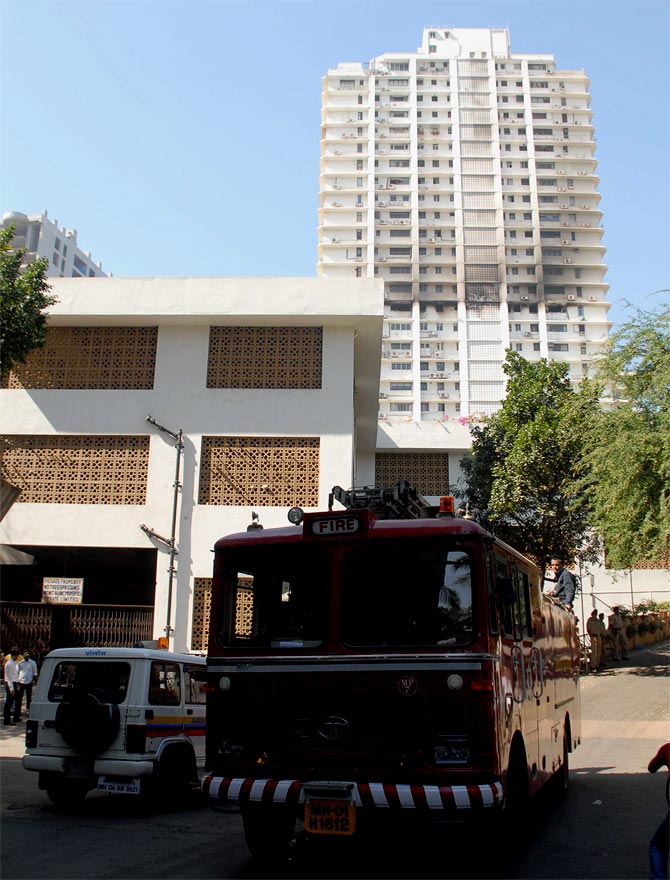 Image: The first target of any fire evacuation plan should be taking the people to a safe place on the ground floor of the building. Rescuers should always make sure that all evacuees use the staircase instead of the lifts of a building under fire.
Photographs: Sahil Salvi

Fire safety and prevention has once again gained focus after the recent mishap in Mumbai’s Kemps Corner. A short-circuit fire that broke out on the 12th floor of the multi-storeyed building that was being refurnished, soon spread across the floor, killing seven people, including two in the lift, and trapped several others living on the upper floors.

Also, since there was no refuge area for emergencies in the building constructed in 1984, people had no option but to stay put till the fire brigade officials came to their rescue.

Could the people residing in Mont Blanc have done something to reduce the casualty or control the spread of fire? For that matter, what should people do when faced with a fire mishap? What kind of safety precautions and preventive measures can one take?

No fire starts big. If preventive action is taken immediately to douse this small fire precious lives and property can be saved.

All sky scrapers have a system in place to tackle fires till the fire engines arrives from closest stations. Water hydrants and hose reels are fitted in all tall buildings. These operate even with low pressure and as such don't require great expertise to handle the first outbreak of fire. For this all tall buildings should train the residents in handling these equipment. The residents should also have maintenance knowledge to keep these equipment in working conditions.

While the Fire Brigade cannot train all such residents due to shortage of manpower, these societies can go to government-appointed agencies that organise such training programmes. These are very short programmes designed to help residents handle small fire situations till the fire brigade arrives.

Depending on traffic condition and the distance between the source of mishap and the closest fire station, fire engines can arrive anywhere between 2 to 10 minutes of the distress call. It is this crucial time passage during which people should use their training to control the spread and outbreak of fire.

If the source of fire is a short circuit then the most important thing to be done is to switch off the mains supply. If the fire has already started one can use small fire extinguishers or sand to douse this fire. In case the fire spreads quickly and is beyond control the focus should be on evacuation of those trapped inside the house, on the floor or from any part of the building.

The first target of any fire evacuation plan should be taking the people to a safe place on the ground floor of the building. Rescuers should always make sure that all evacuees use the staircase instead of lifts (two people died in the lift in Kemps Corner fire accident) of a building under fire.

If people are trapped on the upper floors they should be evacuated and taken to the refuge area built exclusively for such a situation. A refuge area is an empty space on, say, the eighth floor of a building of a 13-floor tower, or any other floor over and above the eighth floor if the building is a multi-storeyed one as prescribed by fire safety laws. People can come together and wait in these refuge areas for proper rescue operations by the fire officers.

If a fire breaks out inside a house then first priority should be given to evacuation of people, and if time and situation permits then one can try dousing the fire at the source, close all electric connections, close all gas connections and then shut the door.

Shutting the door after evacuating everybody present is a must as open doors lead to quick spread of fires.

While moving out after closing the doors the gaps between the floor and door should be covered by clothes to prevent poisonous gases from coming out of the house and spreading on the floor.

Any smoke -- and even heat -- resulting from fires is heavier than air and hence travels towards the ceiling of the house. Those present must never stand in such a situation as it leads to suffocation in case the smoke enters lungs of the people and instances of skin facing high temperatures.

The best options in such a situation are to either crouch or crawl to get out the house. Many deaths in case of fires take place due to asphyxiation. Hence, it is very important to not inhale smoke resulting from fires and move all the trapped people to a safe place on the ground floor. If somebody inhales smoke inadvertently then s/he should be taken out in open air and allowed to breathe without people surrounding her/him.

The other thing those trapped in a smoke-filled room can do is wrap a wet cloth around their noses and mouths as wet clothes obstruct smoke coming from fires.

As soon as fire officials enter the scene of accident those interacting with them should, if possible, provide exact details and location of people trapped on various floors of the building. This reduces response time and results in saving of precious lives.

As burn wounds are very complex people who are not trained should desist from removing burnt clothes from the bodies of victims. This could further increase injuries. Make arrangements to shift such people to a proper hospital where trained doctors can take care of burn victims.

One cannot expect small students to tackle such situations on their own. Every school must train its senior staff in handling various fire-fighting equipment installed in the school’s premises.

Of course, the primary task, as always, will be evacuation of school students to open space and away from the harm’s way.

Like in all cases, the topmost priority should be saving human lives. All the safety and prevention measures mentioned above should be used in this case too.

As told to Prasanna D Zore