Fifteen pilgrims were killed and 18 others wounded in a road accident in the mountainous Ramban district of Jammu region on Saturday night.

A senior police officer said the ill-fated State Road Transport Corporation bus was on way to Jammu from Srinagar when it skidded off the road and fell into a deep gorge in the mountainous Digdole area on the Srinagar-Jammu national highway.

"Out of 33 passengers on board, 15 died on the spot while 18 critically wounded pilgrims were shifted to Jammu for specialised treatment," the officer said.

The pilgrims had returned from their pilgrimage to the Himalayan cave shrine of Amarnath in south Kashmir.

State Governor N N Vohra and Chief Minister Omar Abdullah have expressed deep sorrow at the death of pilgrims and announced cash relief of Rs 1 lakh to the kin of those who died in the accident and Rs 10,000 each for those injured in the accident. 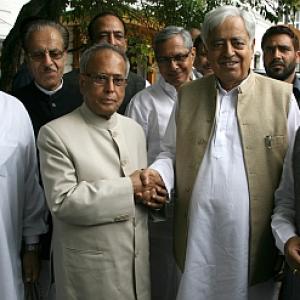