Congress leader Rahul Gandhi has said that the assassination of his father and former prime minister Rajiv Gandhi was the ”single biggest learning experience” of his life, asserting that he cannot get away from the fact that the event also made him learn things that he would have never learnt otherwise. 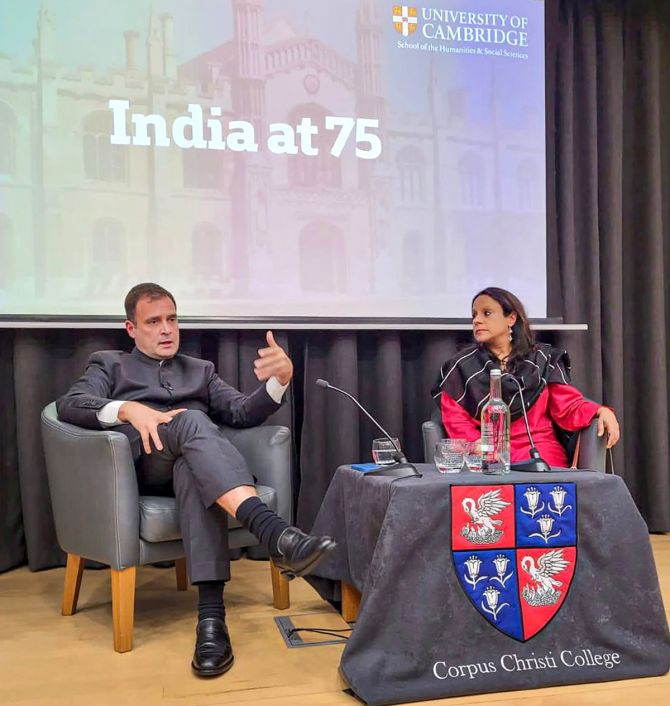 IMAGE: Congress leader Rahul Gandhi speaks during an event at the University of Cambridge, in London, May 23, 2022. Photograph: PTI Photo

In conversation with Indian-origin academic Dr Shruti Kapila at the prestigious University of Cambridge on Monday, he was asked about the death anniversary of his father who was killed in an LTTE suicide bombing during an election rally in Tamil Nadu in May 1991.

Kapila, associate professor in the faculty of history at Corpus Christi College, posed the Opposition MP with a “Gandhian question” of violence and how to live with it at a personal level.

”The single biggest learning experience of my life was my father's death. There is no bigger experience than that,” said Gandhi, after several minutes of pause during which the 51-year-old leader seemed visibly moved.

”Now, I can look at it and say the person or the force that killed my father caused me tremendous pain -- that's correct, as a son I lost my father and that's very painful.

”But then I can't get away from the fact that the same event also made me learn things that I would never ever have learnt otherwise. So, as long as you are ready to learn, it doesn't matter how nasty or evil people are,” the Congress leader said.

Gandhi went on to relate this to day-to-day politics, adding: ”If I turn around and (Prime Minister) Mr (Narendra) Modi attacks me, and I say oh my god he's so vicious, he's attacking me. That's one way of looking at it, and the other way of looking at it -- great, I could learn something from him, give me some more.”

Asked if loss could be productive, Gandhi reflected on the perils of politics where large energies are at play.

”In life you will always, especially if you are in places where large energies are moving, you will always get hurt. If you do what I do, you will get hurt. It's not a possibility, it's a certainty because it's like swimming in an ocean with big waves -- you are going to go under. When you go under, you learn how to react from it,” he said. 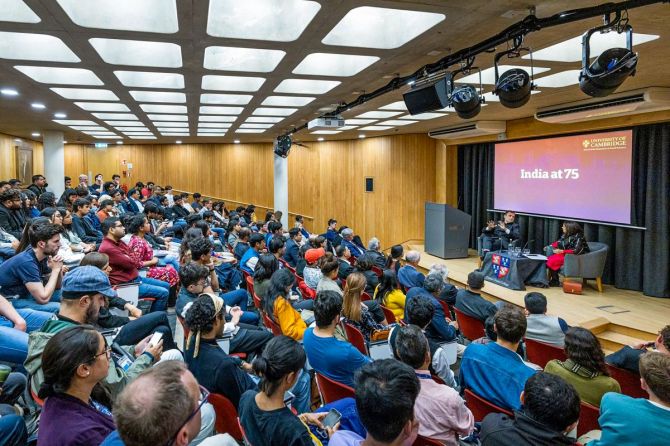 IMAGE: Students listen to Congress leader Rahul Gandhi’s interaction during an event at the University of Cambridge, London, May 23, 2022. Photograph: PTI Photo

During the course of the session at Cambridge University, Gandhi also fielded a series of questions from students from the university who wanted to know how they could get involved with making a difference in Indian politics.

The Congress leader said they could join as interns with party leaders and then be sent to different parts of India to witness political action, but urged them to be ready to tough it out.

”It's a hard business and if you do it properly, it's a painful business, it's not a fun business -- it's a tough job and you are going to get beaten up,” he said, calling upon the youth to join in.

The interactive session marked the conclusion of Gandhi's UK tour, which began last week with his session at the ’Ideas for India' conference in London alongside other Opposition leaders, meetings with Indian Overseas Congress (UK) workers and British Opposition parliamentarians and shadow ministers.

Rajiv Gandhi, who served as the sixth prime minister of India from 1984 to 1989, was assassinated at the age of 46 on the night of May 21, 1991, at a poll rally in Tamil Nadu's Sriperumbudur by a woman suicide bomber, identified as Dhanu.

Fourteen others, including Dhanu herself, were also killed in the terrorist attack carried out by the Liberation Tigers of Tamil Eelam.

Gandhi's assassination was probably the first case in the country of suicide bombing claiming the life of a high-profile leader. 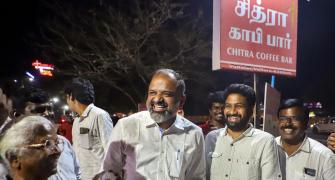 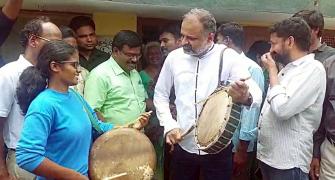 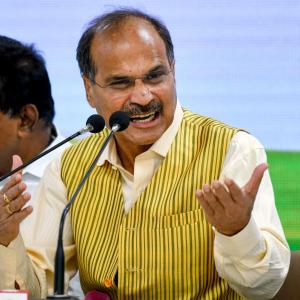 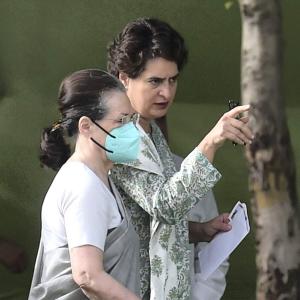