The Congress on Wednesday expressed pain and disappointment over the release of Rajiv Gandhi assassination case convict A G Perarivalan, and slammed the Bharatiya Janata Party government for 'facilitating' the release of the killer of a former prime minister for their 'petty and cheap politics'. 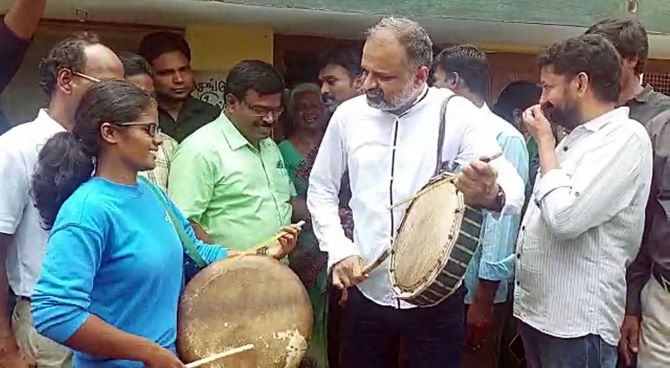 IMAGE: A G Perarivalan and his mother Arputhammal celebrate after the Supreme Court ordered his release, at Jolarpettai in Tirupattur on Wednesday. Photograph: ANI Photo

Congress chief spokesperson Randeep Surjewala accused the government of creating 'a situation' in the court that the murderer of a former prime minister was freed, and asked if the BJP supported this.

Today there is sorrow and fury not only among Congress workers, but in every citizen who believes in India and Indianness, he said.

'It is condemnable and very unfortunate. A terrorist is a terrorist and should be treated as one. Today, we are deeply pained and disappointed at the decision of the Supreme Court ordering the release of Rajiv Gandhi's assassin.'

Invoking its extraordinary power under Article 142 of the Constitution, the Supreme Court on Wednesday ordered the release of A G Perarivalan, who has served over 30 years in jail in the Rajiv Gandhi assassination case.

A bench headed by Justice L Nageswara Rao said the Tamil Nadu state cabinet's advice recommending the premature release of all seven convicts in the case was binding on the governor.

"We are deeply saddened by the decision of the Supreme Court. If those guilty of terrorism, and assassination of a prime minister are going to be released like this, then who will uphold the majesty and the integrity of law in this country," Surjewala asked.

He said Prime Minister Narendra Modi and his government need to answer over their "duplicity and double speak on terrorism".

"Are you going to be complicit in the release of terrorists and murderers of a former prime minister of this country. Is it acquiescence by silence?" he said.

The Congress leader said that on September 9, 2018, the then All India Anna Dravida Munnetra Kazhagam-BJP government in Tamil Nadu recommended the release of all seven persons convicted for the assassination of Rajiv Gandhi, and the recommendation was sent to the then governor Banwarilal Purohit, a former BJP leader.

Purohit 'just sat' over the recommendation, before referring the matter to President of India, the Congress leader said.

'Because the nominee of the BJP government, the governor of Tamil Nadu, did not take a call to accept or reject the recommendation of the then AIADMK-BJP government for release of terrorists and murderers....the Supreme Court had to release one of them,' Surjewala said.

'So, by default you are permitting terrorist and murderers of late Shri Rajiv Gandhi to be released," he said. "Obviously, all six will now be released.'

'Is this nationalism? Is this the duty you owe to this country? Is this the way that you are going to deal with people who are guilty of killing not just a Congress leaders, but, a former prime minister of India,' he asked.

'This has exposed the deep-rooted, prejudice that pervades the mind and the psyche of the prime minister and his government which is reprehensible and condemnable,' Surjewala said.

This is not a question about Rajiv Gandhi, but about a prime minister who was killed, he said, adding the soul of every person fighting against terrorism has been hurt.

'Rajiv ji had sacrificed his life for the country, not for the Congress. And if today's government creates a situation in the court to get his killers released for their petty and cheap politics, then it is very unfortunate and it is condemnable.

'We condemn this in the strongest possible way. All Indians must see what kind of governments are in power today and what is their attitude towards extremism is,' he said.

He also asked if the lakhs of convicts facing the life term should be freed.

'Are we going to say the moment the government changes, they will create circumstances where the Supreme Court would be exercising its power on account of inaction of the government,' he asked.

Surjewala said this will lead to a situation which will neither be in tune with the constitution nor with democracy.

Asked about the Gandhi family having already pardoned the killers of Rajiv Gandhi, Surjewala said, 'Rahul Ji, Priyanka Ji, Sonia Ji, harbour no ill will for they believe in the philosophy of Mahatma Gandhi and Buddha and the years long traditions of this country, where you pardon anybody who has harmed you and given you the worse wound that anybody can give you.'

But, that does not change the law and the constitution of this country, he said.

'The responsibility today to implement the law of the land was that of Shri Narendra Modi's and despite our differences with him, we did not expect that a nominee of the Modi government would commit inaction and that inaction will lead to release of murderers and terrorists, who committed murder of a former Prime Minister of India,' he said.

'So it is beyond what Sonia Gandhi, Rahul Gandhi and Priyanka Gandhi Vadra feel,' he said. 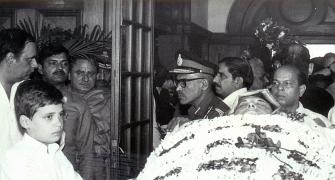 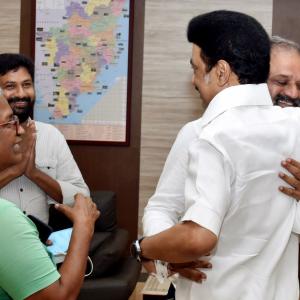 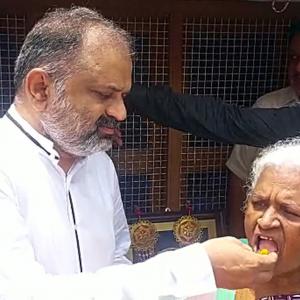