Farmers' protest internal issue of India, for it to resolve: British govt

With United Kingdom’s MPs set to debate next week the safety of farmer protesters, the British government on Friday said what happens in India has ripples in the United Kingdom and gets debated as there is a large Indian diaspora, but asserted that the farmers' protest was India's "internal issue" and it was for it to resolve. 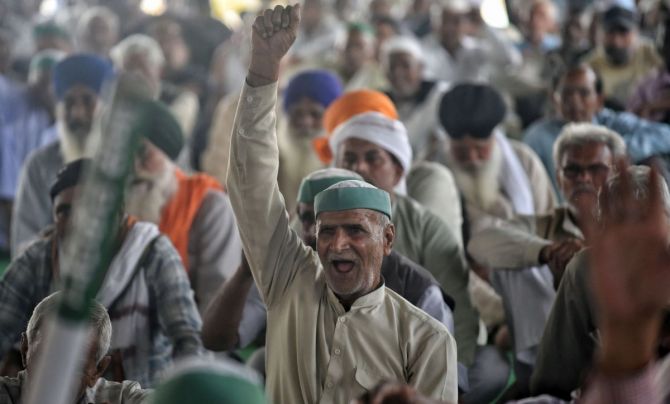 British lawmakers will debate the issue of press freedom and safety of protesters in India next Monday in response to an e-petition which had crossed the 1,00,000-signature threshold required for such a debate, the House of Commons Petitions Committee had confirmed earlier this week.

Asked how he looks at the concerns in the UK over the farmers' protest and if it could impact ties, the new British High Commissioner to India, Alex Ellis, said, "Your verb is the correct one. I look at it. This is an internal issue for India."

"I think the foreign secretary (Dominic Raab) said it when he was here 'your politics is our politics' in other words things that happen in India have ripples in the UK partly because you have such a big diaspora community in the UK, so these things get debated. Our prime minister (Boris Johnson) was asked about it actually in the Prime Minister's Question Time," he said at a media interaction with journalists.

"This is something we look at but it is something for India to resolve," said Ellis, a British strategic expert, who presented his credentials to President Ram Nath Kovind in February to take formal charge as the new UK High Commissioner to India.

Asked about the debate in the UK Parliament on Monday and if the issue has been raised by India with the UK side, the British High Commissioner said the reason these things get discussed is because of the process of petition to which if there are a sufficient number of signatures, an issue can be debated in Parliament and issues related to India are quite regularly debated.

"This is something that is done by Parliament, the government has to participate, it has to answer but it is the parliamentarians, as you expect, raising issues that are a concern to them in their constituencies," the UK envoy said.

"Coming back to the point about your politics is our politics to an extent. My observation more generally is that as the Indian diaspora grows and is very successful in many countries of the world you are going to see more of this. I think that as India grows and becomes more international and ever more significant in the world, there will be more debate about Indian issues," he said.

Ellis, however, asserted that the UK government's view on something like the farmers' protest is that it is an internal matter of India and "we observe it, but it is for India to resolve".

Specifically asked if the Indian side has raised this issue with the UK, he did not give a direct answer and said if the UK would be debated in the Indian Parliament, "I would be interested in it".

"So If the Indian government is interested in issues like farmers' protest being discussed in the UK Parliament, I am not surprised if there is an interest," he said.
The 90-minute debate on Monday will be held at the Westminster Hall in the Houses of Parliament complex in London and will be opened by Scottish National Party MP and member of the Petitions Committee Martyn Day, and a minister will be deputed to respond on behalf of the UK government.

The government has denied allegations that it was trying to put an end to the MSP and the mandi system. Prime Minister Narendra Modi has also assured farmers that the MSP would continue.