Congress leader Rahul Gandhi on Wednesday alleged that farmers are being 'systematically attacked' and there is 'dictatorship' in India now with politicians not being allowed to visit Uttar Pradesh to meet the families of the victims of the Lakhimpur Kheri incident. Addressing a press conference, Gandhi said he along with two Congress chief ministers -- Bhupesh Baghel (Chhattisgarh) and Charanjit Singh Channi (Punjab) -- will try to visit Lakhimpur Kheri to meet the families hit by the violence.

Taking a dig at Prime Minister Narendra Modi, Gandhi said that on Tuesday the PM was in Lucknow but he could not go to Lakhimpur Kheri, where eight people have died in violence.

Asked about the detention of Priyanka Gandhi Vadra and the treatment meted out to her, he said it is not about her but this is an issue about farmers. "As far as Priyanka is concerned, she has been held. But this is issue is about farmers."

"For some time now, the farmers are being attacked by the government. Farmers are being mowed down by a jeep, they are being murdered, the name of a Bharatiya Janata Party home minister and his son is coming up, but no action is being taken," Gandhi said.

"The farmers of the country are being systematically attacked. The first attack was to reverse the land acquisition bill, the second was bringing the three farm bills and today systematically what rightfully belongs to farmers is being snatched away," the former Congress chief alleged.

Gandhi alleged that a new type of politics is being played in Uttar Pradesh where criminals are doing whatever they want and are roaming freely while those seeking justice for the victims are being arrested.

"What is happening in UP is that farmers are being killed. But earlier too, in Hathras a girl was raped, earlier too their MLA was involved in a rape. This is a new type of politics played out systematically in Uttar Pradesh, and criminals can do whatever they want, be it rapes, murder of farmers.

"Those who commit the crime and murders are outside the jail and those who die go inside the jail," Gandhi, flanked by chief minister Bhupesh Baghel and Charanjit Singh Channi, said.

"We want to go there and support the families. Only we are being stopped, while others parties are being allowed to visit there. What wrong have we done," he said.

The Opposition's work is to exert pressure on the government for taking action against the guilty and that is what they are trying to do, he said.

He also alleged that the postmortem of victims is not being done properly and systematically whatever one is saying is being shut.

Responding to a question, Gandhi said the government doesn't realise the power of the farmers.

Gandhi alleged that a 'dictatorship' was prevailing in the country as 'massive theft' was taking place.

When the Chhattisgarh chief minister goes to meet the farmers, he is told that Section 144 in place and when he says he is alone and the section is not applicable, he is not given an answer, Gandhi said.

"There is dictatorship because there is massive theft taking place. The small and medium businesses are being robbed, farmers are being robbed and the common people are also being robbed with rising petrol and diesel prices. The voice of the country is being trampled upon," he alleged.

Asked whether the Opposition was getting together to take on the government after political leaders were stopped by the government from visiting Lakhimpur Kheri, he said, this is about the farmers and their issues and the alleged murder that has taken place in Uttar Pradesh. "I do not wish to distract that," said Gandhi.

Four of the eight dead in Sunday's violence in Lakhimpur Kheri were farmers, allegedly knocked down by vehicles driven by the BJP workers travelling to welcome Uttar Pradesh deputy chief minister Keshav Prasad Maurya to an event in the area.

The others including the BJP workers and their driver were allegedly pulled out of the vehicles and lynched by the protesters. 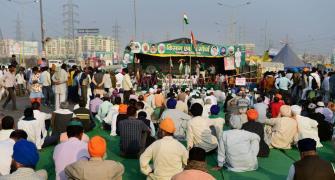