The Ghaziabad administration had given an ultimatum to agitating farmers to vacate the UP Gate protest site by Thursday night even as union leader Rakesh Tikait remained adamant, saying he would commit suicide but won't end the stir. 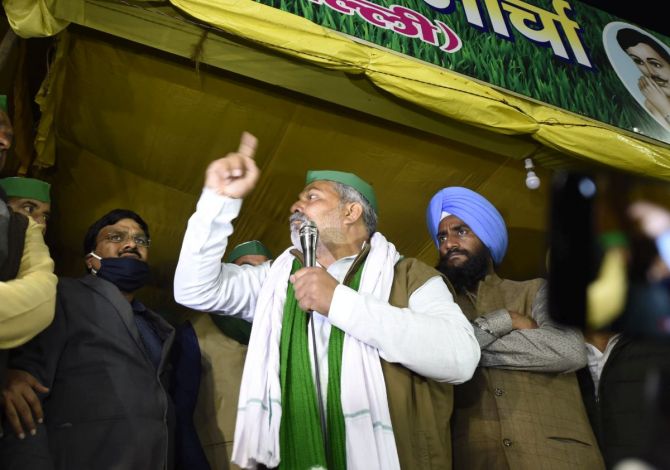 A confrontation was building up at the UP Gate in Ghazipur bordering Delhi with heavy security deployed while frequent power cuts were witnessed in the evening at the protest site, where Bharatiya Kisan Union members, led by Tikait, are staying put since November 28.

The 'verbal' communication from the district administration to BKU on Thursday comes after three farmers union withdrew their protest against the three central farm laws over the violence in Delhi on Republic Day. 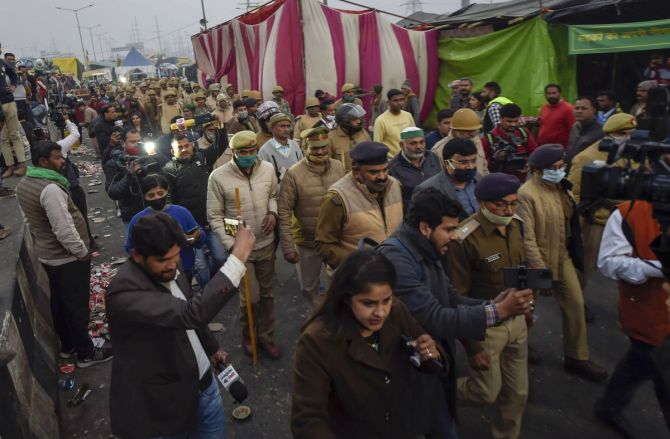 "Ghaziabad District Magistrate Ajay Shankar Pandey has communicated to the protesters camping at the UP Gate at Delhi border to vacate the spot by tonight or the administration will remove them," a district official told PTI.

However, Tikait, the Bharatiya Kisan Union's national spokesperson, condemned the Uttar Pradesh government and police for the move.

"I will commit suicide but won't end protest until the farm bills are repealed," Tikait said in a message to PTI, claiming threat to his life. He also alleged that armed goons were sent to the protest site and 'infiltrators' were trying to create ruckus in the peaceful protest.

In a separate statement issued by BKU media in-charge Dharmendra Malik, Tikait was quoted as saying that the Uttar Pradesh Police was trying to arrest protesters even when the Supreme Court has found peaceful protests legitimate. 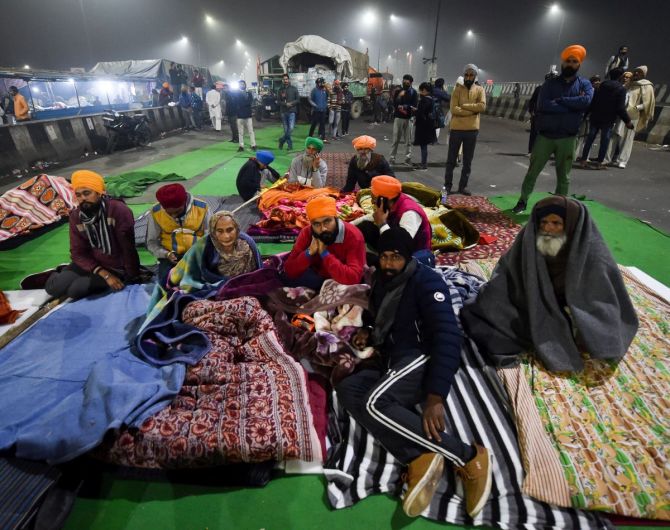 "Our protest will continue," he added.

Tikait, son of legendary farm leader Mahendra Singh Tikait, also broke down while speaking to media at the protest site in the evening.

He alleged that 'injustice' was being meted out to the farmers by the government by not repealing the new farm laws.

Tikait, who is one of the farm leaders named in the Delhi Police's first information report over the Republic Day violence in the national capital, said there should be a judicial inquiry into the Red Fort incident. He said his union has socially boycotted Deep Sidhu, who was allegedly involved in the incident at the Red Fort on Republic Day.

Tension was further building up at UP Gate after 9 pm, as more security personnel, several of them in anti-riot gears, reached the site even as farmers gathered near the main stage while many stretched out on mattresses laid on the closed Delhi-Meerut Expressway covering themselves in blankets and quilts in the cold night.

Around 500 farmers from western Uttar Pradesh reached the protest site on Thursday night on the call of BKU leaders. Protesters claimed that there have been frequent power cuts at the protest site since Thursday evening while water supply in tankers were disrupted since Wednesday.

"I will not drink water now. I will drink only the water that has been brought by farmers from villages," Tikait told the media.

Around 10.30 pm, a team of doctors reached the protest site to check health condition of Tikait. IMAGE: Police personnel arrive at Ghazipur border to hang notices for farmer leaders after the FIRs registered against them in connection with Republic Day violence, on Thursday. Photograph: Kamal Singh/PTI Photo

Thousands of protesters and hundreds of security men stayed put on the Delhi-Meerut Expressway and on the Link Road passing under the flyover at UP Gate around midnight.

Police had barricaded both sides of the expressway on Thursday, with protesters, who had otherwise occupied only one carriageway (Ghaziabad to Delhi), spilling over to the other side of the key road too.