'Violence was scripted by the government'

'On January 22, when the last round of talks took place, the farmer leaders were told by Agriculture Minister Narendra Singh Tomar that the government is also prepared.'
'And they did this.' 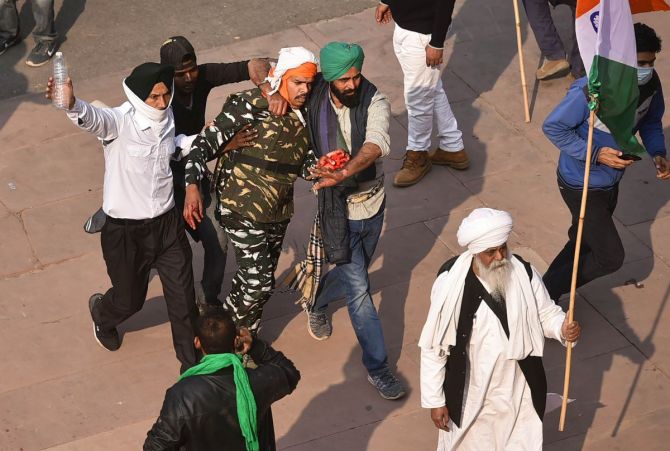 IMAGE: An injured security person is taken away after clashes with protesting farmers during the latter's tractor parade in New Delhi on Republic Day. Photograph: Arun Sharma/PTI Photo

After the violence in New Delhi on Republic Day, in which about 400 policemen were reportedly injured, it looks like farmers unions have lost the plot as far as public opinion is concerned.

However, that has not deterred the farmers, who say that only 0.1 per cent of the protesters turned violent during the tractor parade on January 26.

Though two of the unions have withdrawn from the joint protest, Ashok Dhawale, president of the All India Kisan Sabha, said, "Lakhs of farmers are still camping at Delhi borders. Nobody has gone back."

In an interview with Rediff.com's Syed Firdaus Ashraf, Dhawale said the agitation will continue till the three contentious farm laws are repealed.

Public sympathy for farmers is dwindling after the incidents at Red Fort and other parts of Delhi on January 26. Why did the protesters have to resort to violence?

99.9 per cent of the Kisan tractor rally was peaceful. It was only 0.1 percent (of the protestors) that turned violent.

It was a small section of the movement, which was also set up by the government (which turned violent) and we have evidence to prove it.

Deep Sidhu is a Bharatiya Janata Party agent. He was the election agent for BJP MP Sunny Deol in the 2019 election.

Sunny Deol has tweeted he has 'nothing to do' with Deep Sidhu.

Everybody says these things when they get into trouble, but it is a known fact.

It is a known fact that Deep Sidhu was Deol's election agent in 2019. These facts cannot be denied.

Is Deep Sidhu alone to be blamed for the violence?

There is another organisation, the Kisan Mazdoor Sangharsh Samiti.

They did not come to the Delhi borders on November 26 with other farmers' unions. They came 20 days later.

They were given a special place at ther Singhu border by the police. Why would the police do such a thing?

They did so because they could use this organisation as they wanted.

I was there at the Samyukta Kisan Morcha (umbrella body of multiple farmers union) meeting today (January 27) and all the Punjab farmer organisations said that this Kisan Mazdoor Sangharsh Samiti is not a part of their united front.

They came to Delhi's border and put up a separate camp at the behest of the police.

And when it was decided that the tractor parade would start at 10 am on Republic Day, these people went ahead at 7 am with their own morcha.

They were not stopped by the police.

(Interrupts) You try to go to the Red Fort and try to see whether you can put up any flag there. You will be shot down by the police.

But they were, in fact, encouraged by the police.

The security was absent from the Red Fort and that too on Republic Day.

Farmers' mobs beat up the police, that is why they had to run for cover from the Red Fort.

It is nonsense to peddle such narrative (of attacks on policemen).

Normally, not only the police, but the army too is posted at the Red Fort.

And you think anyone can just go in and put up a flag on Red Fort? It is impossible.

You are saying that everything that happened on January 26 at the Red Fort was scripted by the government to defame farmers?

Everything was scripted by the government. Totally.

On January 22, when the last round of talks took place, the farmer leaders were told by Agriculture Minister Narendra Singh Tomar that the government is also prepared.

And they did this. But such things don't work for a long time.

People know the truth now and sympathy for farmers will be regained.

Many farmers are going back to villages after getting disillusioned by the violence. Is there no unity left among farmers?

There's absolutely no split in the unity of farmers.

Today (Wednesday), the press conference was attended by all the main farmer organisations.

Not a single organisation missed the meeting except those two blacklisted ones who took part in the violence.

They will be thrown out now and they will never dare to come back again. Everyone is determined to continue the struggle.

I am coming from the Singhu border, where lakhs of farmers are still camping. Nobody has gone back.

Cases have been filed against farmer leaders.

That was expected. This is exactly the game of the government.

They wanted to manage this and do some kind of match-fixing with those two organisations so that they could file cases against us.

We are not overly worried about that.

And on January 30, the martyrdom day of Mahatma Gandhi, we will have a big meetings in favour of truth and non-violence.

We will also observe a one-day fast.

'Who are Deep Sidhu's political masters?'
'Yes, it is a setback to our movement' 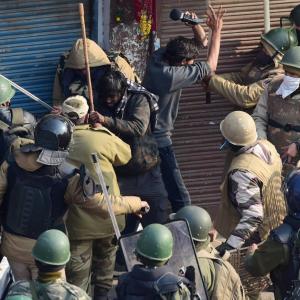