Farmer taking away cot is 'thief', but Mallya a 'defaulter'? Rahul 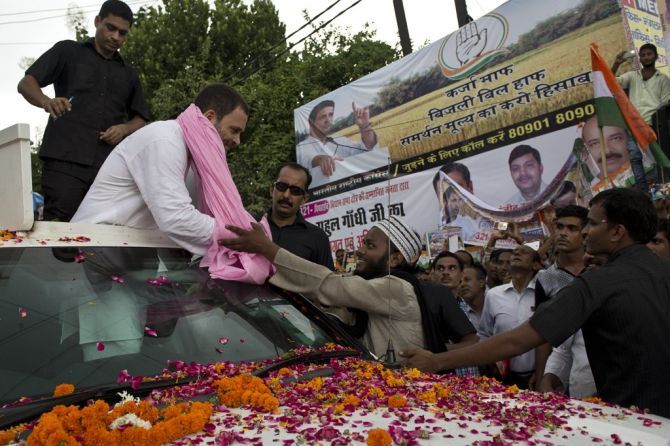 Congress vice president Rahul Gandhi on Wednesday took a dig at the present system saying while big industrialists like Vijay Mallya who fail to repay bank loans of crores of rupees are called defaulters, farmers taking away cots are dubbed as thieves.

“Kisan Khatiya le jata hai to wo use chor kehte hain. Magar jab bade udyogpati, Mallyaji jaise, bhag jaate hain to use defaulter kehte hain. (If a farmer takes away a cot, he is called a ‘thief’ but people like Vijay Mallya who run away with crores of rupees are called mere ‘defaulters’),” he said.

The Congress vice president was addressing farmers after a road show Gorakhpur.

He had earlier accused the ruling dispensation of allowing Mallya to ‘escape’ abroad even when he was facing charges of loan default in the country.

Rahul, who is undertaking about a month-long 2,500-km mahayatra from Deoria to Delhi that started on Tuesday, is highlighting the plight of farmers.

As part of the yatra, ‘Khaat Sabha’ (cot meetings) are being organised for Rahul to interact with farmers.

At the inaugural Khaat Sabha on Tuesday, moments after Rahul left after having made a raft of promises like farm loan waiver, reduction of power tariff and higher minimum support price for agricultural produce, the venue plunged into utter chaos with men, women and children scampering in, lifting the charpoys and hurrying towards their homes.

Later, at a ‘Khaat Sabha’ in Sant Kabirnagar district on Wednesday, Rahul referred to the incident of locals taking away the cots brought for the meeting, saying, “Our opponents see farmers as poor persons but I always feel that farmers are the real power of Hindustan.”

Attacking Prime Minister Narendra Modi, he said, people are facing problems but it has no effect on the prime minister.

On the state of affairs in Uttar Pradesh, he said that farmers were only getting bills but no electricity.

Meanwhile, the Bharatiya Janata Party lashed out at the Congress vice president after he raked up the Mallya issue and accused him of speaking lies and making baseless allegations to divert attention from the Samajwadi Party government’s failures in Uttar Pradesh as he has struck a ‘deal’ with it.

The party said Mallya had turned a defaulter during the United Progressive Alliance government but it had still asked the banks to give him more loans as the Congress, it alleged, received commission from him.