News
Business
Movies
Sports
Cricket
Get Ahead
Money Tips
Shopping
Sign in  |  Create a Rediffmail account
Rediff.com  » News » 'If something happens to us or daughter, Chinmayanand responsible'

'If something happens to us or daughter, Chinmayanand responsible'

Parents of the law student who has gone missing have said that if something untoward happens to them or to their daughter, Bharatiya Janata Party leader Swami Chinmayanand will be responsible for it. 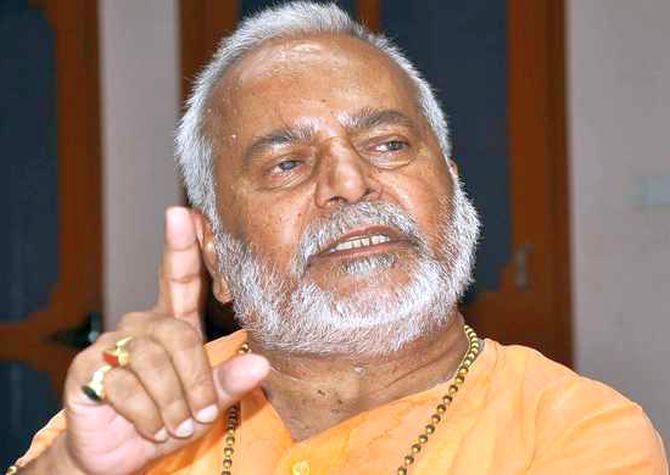 "Only a FIR has been registered against him. He has not been arrested or interrogated. Police should try to recover my daughter. Swami Chinmayanand should be asked where the girl is. If something untoward happens to us or my daughter, Swami Chinmayanand will be responsible for it. Police did not register FIR for three days," the girl's father said, adding, "Our family is living in fear."

The girl's mother said they got to know that she was missing only after watching her video.

"In the video she is heard saying that her life is in danger and is blaming the college manager," she said.

"I want my daughter back safely. She (girl) told her father that if her phone remains switched off for more than 3-4 hours, then know that she was in trouble. Only time will tell If I get justice or not," she added.

An FIR has been registered against former Union minister and BJP leader Swami Chinmayanand after the law student who alleged he had been harassing her went missing, police said on Tuesday.

Chinmayanand has been booked under sections 364 (abduction) and 506 (criminal intimidation) of the Indian Penal Code, the police said.

The girl's family has alleged that the BJP leader is responsible for her disappearance.

A video of the missing girl had gone viral on August 24 in which she had alleged that a person from the 'Sant Samaj' had destroyed the lives of many women and he has done the same to her. She also alleged that the person had also threatened to kill her and her parents.

The parents of the girl had said that their daughter went missing after her video accusing Chinmayanad went viral on social media.

Meanwhile, Chinmayanand's lawyer has alleged that the BJP leader had received a message on his phone on August 22 from an unknown number demanding Rs 5 crore and threatening that if the money is not given, then they will release an explicit video of the leader.

An FIR has also been lodged against unknown people for allegedly demanding the extortion, the police said.

"On August 22, Chinmayanand received a message demanding Rs 5 crore. An FIR against unknown persons was registered and we are investigating the matter. Her (the girl) father had alleged that she was abducted. An FIR has been lodged against Chinmayanand on his complaint," Shahjahanpur SP S Chanappa said.

He said that the police were working to ensure the safe return of the girl and to arrest the person who allegedly threatened the BJP leader and demanded extortion.

The girl's father has been provided security cover, he said.

The police have also taken a person into custody in connection with the alleged extortion case.