News
Business
Movies
Sports
Cricket
Get Ahead
Money Tips
Shopping
Sign in  |  Create a Rediffmail account
Rediff.com  » News » Shah Faesal 'informally' asked not to move out of his home

Shah Faesal 'informally' asked not to move out of his home

IAS officer-turned-politician Shah Faesal and two Peoples Democratic Party members, including the maternal uncle of former chief minister Mehbooba Mufti, who were released from detention under the Public Safety Act earlier this week have been "informally" told not to move out of their houses, informed sources said. The three were shifted to their official residences on Wednesday after they were released following revocation of the controversial Public Safety Act against them by the home department of the union territory.

However, they were conveyed informally that they should not step out of their homes and a police guard has also been posted outside, the sources said.

When contacted, Sartaj Madani, uncle of Mehbooba Mufti, said over phone that he was not sure whether he had been kept under house arrest but added that he was not allowed to go to his native village in Bijbehara of South Kashmir.

"I was told that I can go without assigning any reason," he said.

Efforts to seek a reaction from Peer Mansoor, political advisor during the tenure of Mehbooba Mufti as chief minister, and Faesal, a 2010 batch IAS officer did not fructify as their phones were not reachable.

The three were among a host of political leaders detained initially under preventive custody and later under the PSA in the aftermath of the August 5 development when the Centre withdrew the special status of the erstwhile state and bifurcated it into two union territories -- Ladakh, and Jammu and Kashmir. 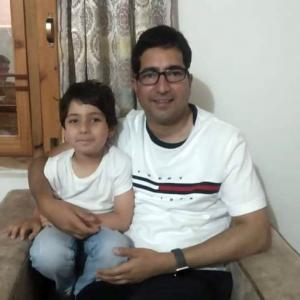