Exclusive: After India, B'desh in cyber war with Myanmar

The hacking of Bangladeshi websites including its largest online news site bdnews24.com has triggered the war, which is expected to again speed in days to come.

The maritime dispute between Myanmar and Bangladesh was settled last month through the delivery of a landmark verdict by United Nations International Tribunal for the Law of the Sea on March 14. It provided Bangladesh with its claims to a full 200 nautical miles exclusive economic zone in the Bay of Bengal along with a substantial share of the outer continental shelf beyond 200 nautical miles. Some experts later reasoned that through the verdict, both nations have been facilitated.

However, building up on the verdict's outcome, among other reasons, a war in the cyberscape may soon gain speed between hackers of both countries, following an onslaught by Myanmar hackers, this past week.

The fact was noted on the night of April 11, when the largest online news site in Bangladesh, bdnews24.com, was allegedly hacked. The site could not be accessed by readers for almost 15 minutes till early minutes of April 12. The home page of the site mentioned the name of the hacker and his occupation, while implying that he is from Myanmar.

According to the web information company Alexa, bdnews24.com is the eighth most popular site in Bangladesh and holds a global rank of 2,030. While talking to rediff.com on April 12, Yasir Riad, a software engineer of bdnews24.com tried to downplay the allegations of hacking, when he reasoned that there was probably a virus in the server.

Bangladesh cyber army sources alleged that along with bdnews24.com, at least 40 Bangladeshi sites were hacked by a group of hackers who hail from Myanmar. "There were at least three Bangladesh government websites in this list," claimed a BCA representative to rediff.com on April 12.

The BCA representative explained that such form of mass hacking or hacktivism occurs when a group of hackers want to press home a certain cause. "The Myanmar hackers basically tried to warn Bangladesh about the maritime dispute win and other issues that still has not been resolved between the two countries," he said.

Following the attacks, BCA claimed to have attacked a number of Myanmar sites from April 13. "We did not hack any of the government sites. We targeted a few sites including three hosting sites and some forums of Myanmar hackers," said the BCA representative.

He added, "Hacker communities of Pakistan, India, Bangladesh, Sri Lanka and others are in communication with each other. So when there is such mass attack on a particular country or organisations websites, hackers of these countries usually are abreast of the causes behind it. But as Myanmar is fairly new, they are not in contact with the global hacking community."

The Myanmar-Bangladesh conflict once again brings to fore the efficiency of hackers in the South Asian region.

While India, Pakistan and Sri Lanka has had Internet over the past two decades, Bangladesh is a fairly late bloomer in the sector. Myanmar, on the other hand, is just growing.

According to the report 'State of Internet Usage in Myanmar' by Wai-Yan Phyo Oo and Saw Pyayzon published in July 2010, Myanmar has over 4,00,000 Internet users, which is 0.8 per cent of the total population. The majority of these users are based in Yangon and Mandalay.

"Hence it came as a surprise to us to see that hackers from Myanmar are doing all this," said the BCA representative.

BCA was itself a part of the cyber war between groups of hackers of Bangladesh and India in February, that saw the hacking of as many as over 25,000 websites on both sides of the border, in a matter of just four days.

From February 11 till February 14, international media who covered the war claimed that over 400 Bangladeshi sites were hacked by Indian hackers and over 20,000 Indian websites including government sites like the Border Security Force's and numerous private websites were attacked by Bangladeshi hackers.

Although there was no significant destruction of data or financial loss reported on either side. Indishell, ICA and the HCA posted ominous messages to Bangladeshi hackers on the Bangladeshi sites, while, Bangladeshi hackers posted messages and images protesting the killings and torture of Bangladeshi nationals at the hands of BSF personnel at the 4,165-kilometer long India-Bangladesh border and India's construction of the Tipaimukh dam that is likely to have severe environmental affects on Bangladesh and adjoining areas of India.

Indian hackers stopped hacking Bangladeshi sites by February 14, driving some Indian media to dub Bangladeshi hackers the "victor". On February 27, BBHH declared "an end to their cyber attacks on India" on their Facebook page, taking the outcome of the two-day long talks between Home Minister P Chidambaram and his Bangladeshi counterpart Sahara Khatun at New Delhi, as a positive sign.

At the home-ministerial level talks that concluded on February 25, Delhi assured Dhaka to bring border killings "down to zero".

A BCA representative pointed out to this correspondent that hacking has become convenient in South Asia due to lack of proper security measures. "Of all the South Asian countries, India's web security is at considerably better standard, with Pakistan coming at second and Bangladesh's being minimal," he said.

He explained that as hackers use various proxy servers and, after each attack, the hacked server logs are cleared, "when cyber crime authorities check, they find that the server was accessed from various parts of the world," he said.

Such form of hacktivism has been popularised by Anonymous, an international hacking community infamous for the hacking of Ontario association of chief of police's website, high profile United States government websites, Sony, PBS, Vatican's website and others this year, while protesting various issues. 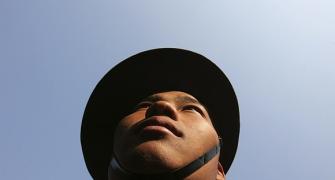