Why Washington Post's coverage of Kashmir is not credible IMAGE: Kashmiri women protest the clampdown in force in the Kashmir valley following the cancellation of Article 370. Photograph: Umar Ganie for Rediff.com

Prologue: He was tall and powerful; Washington Post was his name. With a flourish, he plunged a dagger into my entrails and continued to do so almost daily for over a month; each day brought with it a dagger that was sharper and longer than the previous one.

'Egging him on were some of my own compatriots. I have done nothing wrong I responded firmly. You are a tyrant, a murderer and a despot, he screamed. Let me speak, I repeated forcefully. No, he said, you do not have the right to respond. He then stuffed a rag into my mouth and tied a bandana across it so that no sound would escape my lips.'

'With the job done, Washington Post went out and proclaimed to the world that he was a champion of free speech and a guardian of democracy.'

The Modi government's assertive decision to rescind Kashmir's special status (by abrogating Article 370 of the Indian Constitution) has provoked the Western media especially in the United States to unleash a caustic campaign of toxic misinformation that borders on unbridled hysteria; a shrill, one-sided media diatribe that seeks to paint India under Modi as an authoritarian regime out to suppress dissent and classify the Kashmir decision as an example of blatant Hindu majoritarianism.

Spearheading this campaign is The Washington Post -- one of America's leading daily newspapers. Over a period of a month, the Post has published approximately 20 or more Kashmir-related articles that included news reports, opinion pieces, editorials and analytic segments -- an extraordinary focus on one single news event; barely one or two of these articles have been favourable to India.

How valid are these charges?

Who are these worthies castigating India for debasing democratic values?

And does this really reflect the stance of the West?

The anatomy and physiology of The Washington Post's coverage of the Kashmir issue makes for insightful analysis.

Especially telling is the identities of authors penning these articles.

Leading the charge are an ideologically committed band of well-known Indians like Rana Ayub, Kapil Kommireddi, Barkha Dutt and Ramachandra Guha -- all Modi-bashers and BJP antagonists to the hilt.

Mili Mitra, an editor for the Post's Global Opinions section and a person of Indian extraction, pours in her own vitriol with a piece titled, 'This is the Modi government's darkest moment'.

Adding their mite to this inquisition were a couple of Kashmiri Muslim-Americans like Hafsa Kanjwal (an academic) and Mona Sahaf.

And capping it all we had Asad Majeed Khan, Pakistan's ambassador to the United States, capitalising on the negative momentum built up by our own countrymen.

This list of contributors clearly indicates that this is not an independent, unbiased viewpoint of Western opinion-makers but a rehash of the jaded opinions prevalent among certain sections of Indians, now being propagated in the West by the usual suspects.

With the identities of this ensemble of raconteurs unequivocally established, let us proceed to dissect out the narrative that is being framed.

While it is true that the Internet remained suspended in the valley for a prolonged period (mainly to thwart the shenanigans of Pakistan and native trouble-makers out to create mayhem and prevent loss of innocent lives), the charge of a total press blackout is a tall claim exposed by the Post's own reporting.

Kashmir remained freely accessible to Indian correspondents of The Washington Post and other journalists as well.

For example, there are updates on August 9 (Protests erupt in Kashmir over India's move to end autonomy), August 12 (India Kashmir: Detentions of local politicians deepen crackdown), on August 14 (A dormant volcano: Kashmir's streets are quiet, but residents seethe with resentment) and many more by Niha Masih, the India correspondent for The Washington Post with a dateline of Srinagar.

In one report (August 14) Niha Masih avers: 'I spent four days in Kashmir in the aftermath of India's dramatic move ...and saw firsthand that despite the quiet on the streets, Kashmiris are seething with resentment.'

Rana Ayub, on September 5 in an opinion piece with an incendiary title, 'Our children are in jail: How India is keeping Kashmir isolated and in fear' states: 'I spent four days in Kashmir before I had to leave for Delhi to file this.'

Moreover, reporters had access to some local politicians as well as suggested by this report (India Kashmir: Detentions of local politicians deepen crackdown) filed on August 12 with dateline Srinagar by Niha Masih and Joanna Slater ( with contribution by Ishfaq Naseem in Srinagar): 'Adnan Ashraf Mir, a spokesman for the Jammu & Kashmir People's Conference, said that its leader, Sajjad Lone, was placed under house arrest on Aug. 4.'

So, if we have reporters freely waltzing in and out of Kashmir and interacting unhindered with local residents (read articles by Rana Ayub on September 5 and Niha Masih on August 14) where does this notion of stifling dissent come from? Only what the government has done is to prevent violent demonstrations.

The overarching theme of this malignant jeremiad is that the Modi government has acted in a despotic manner and India's democracy is in danger; an argument that falls apart when scrutinised objectively.

Abrogation of Article 370 was not done abruptly or overnight, but came at the end of a prolonged public debate on the issue; additionally, the process to dismantle the controversial statute was done legitimately via parliamentary legislation in keeping with India's Constitution.

Nevertheless, this does not stop some commentators from pursuing a false patois.

Kapil Komireddi is the author of Malevolent Republic: A Short History of the New India, which is actually a harangue on Hindutva. In a rant (The Washington Post, August 16, The Kashmir crisis isn't about territory. It's about a Hindu victory over Islam) that revels in half-truths and outright lies the author claims that a soldier has been placed outside every home in Kashmir, refers to accusations levelled against Modi for the 2002 Gujarat riots but fails to state that a Supreme Court SIT absolved him of the charges and then goes on to make a sweeping postulation: 'Modi's sudden takeover in Kashmir is the fulfillment of a long ideological yearning to make a predominantly Muslim population surrender to his vision of a homogeneous Hindu nation.'

Mili Mitra smugly concludes that the 'administration is making India less democratic, one authoritarian step at a time.'

And an editorial in The Washington Post (August 16) states that Modi had 'stained' India's democracy.

Hafsa Kanjwal, an assistant professor in South Asian history at Lafayette College and a Kashmiri by origin surmises: 'This move highlights the ways in which India is quickly descending to an authoritarian state -- and one that will flout international law and its own constitution to achieve these ends.'

What is being deliberately overlooked here is that as per the Indian Constitution, Article 370 was supposed to be a temporary provision whose abrogation was inevitable.

Finally, in the mother of all ironies, The Washington Post provides a platform for Asad Majeed Khan, the ambassador of Pakistan, a military dictatorship with an unenviable record of persecuting minorities, to indulge in a ridiculous homily: 'August 5 also sounded the final death knell for India's increasingly tenuous claims to be a secular democracy. In fact, the right-wing BJP's project to remake India (not just occupied Kashmir) is neither secular nor democratic. Instead, the BJP envisions a future in which India's long-suffering Muslims, Christians, lower-caste Hindus and other religious minorities and tribes are formally relegated to the status of unpersons.'

Another subtext to this distorted reality is the contention of demographic engineering; again, put forth by Indians or expatriate Indians. Read the following quotes from a report by Claire Parker (The Washington Post, August 8, Kashmir's new status could bring demographic change, drawing comparisons to the West Bank).

Mihir S Sharma, an Indian columnist, for Bloomberg: 'Whether Kashmir will end up looking like those restive, semi-autonomous provinces(external link), or more like the West Bank -- with armed settlers living in highly protected colonies amid a larger, disenfranchised population subject to arbitrary justice -- is not clear at the moment. Those are, however, the most likely options.'

Sumit Ganguly, a political science professor at Indiana University at Bloomington who specialises in South Asia: 'For all the talk about promoting investment and economic development in Kashmir, the real goal is to change the demography of the state.'

Ironically, what Sumit Ganguly and Mihir S Sharma conveniently overlook is the demographic engineering that has already occurred: The ethnic cleansing of Kashmiri Pandits.

Ramachandra Guha goes a step further devaluing India's democratic credential as a whole. In a rambling article that was supposed to be an ode to India on its Independence Day, Guha instead gave vent to his own pique by deeming India as a '30-70 democracy because of Kashmir (The Washington Post, August 14, India was a miracle democracy. But it's time to downgrade its credentials).

Strangely enough, these articles, whose authors claim to be votaries of free speech and democracy, completely ignore the elephant (or elephants) in the room, namely, terrorism and its casualties -- 40,000 killed over three decades, the ethnic cleansing of 350,000 Kashmiri Pandits, and Pakistan's nefarious interference.

A regulated debate that ignores the key elements of the issue and deliberately shuts out an opposing point of view can hardly be plausible; it defies the basic premise of free speech and nullifies the Post's claim of being a standard bearer of democracy.

In summary, the Post's coverage is not an authentic public discourse guided by unbiased Western intellectuals but slanted doomsday propaganda orchestrated by Indians and expatriate Indians; a recycled version of the same cliched domestic argumentum now being projected as world opinion. It must be called out for what it actually is.

Furthermore, India's liberal lobby, when forced on the backfoot, has a tendency to exploit Western media outlets to embarrass and intimidate their ideological adversaries. The current brouhaha is one such example.

However, times have changed. The craving for Western approval is a thing of the past. A new India is evolving that is confident in its identity and its actions; a nation that will engage the world on its own terms without being intimidated or influenced by a faux Western opinion.

By its unvetted embrace of a few increasingly marginalised Indian intelligentsia, The Washington Post has put its own credentials in jeopardy; its credibility has hit rock bottom with Indians.

As to India's decision on Kashmir, we have nothing to be apologetic about. We did right by our conscience and by our civilisational values of equality, plurality and non-violence -- the tenets that will continue to guide us in the future. The world need not be concerned and Kashmiris need not fear.

PS: This author submitted three op-eds for consideration to The Washington Post all of which were rejected.

The world need not be concerned and Kashmiris need not fear.

PS: I submitted three op-eds for consideration to The Washington Post all of which were rejected. 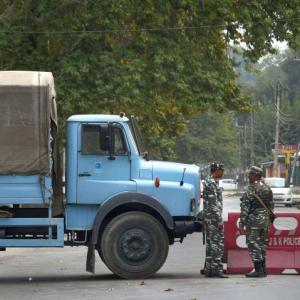