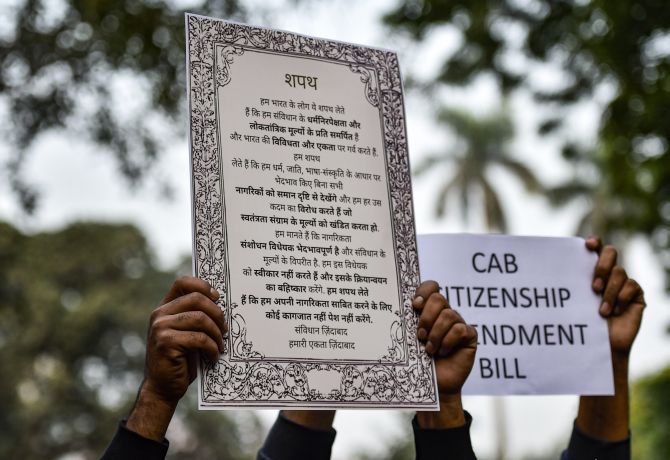 The European Union on Tuesday said it was concerned over restrictions on 'fundamental freedom' of people in Kashmir and called for steps like restoration of communication network and essential services to bring back normalcy in the Valley.

Astuto, at a media briefing, said the European Union's position has been that India and Pakistan should resolve all issues through dialogue.

"Pakistan must take action against militants and terrorists including against those involved in financing and supporting the terror groups," he said.

Astuto also hoped that the principle of equality enshrined in Indian Constitution will be upheld in the proposed law which seeks to provide citizenship to non-Muslim minorities from Pakistan, Bangladesh and Afghanistan.

He said he was confident that outcome of the ongoing parliamentary discussions on the Citizenship (Amendment) Bill (CAB) will be in sync with standards set by the Indian Constitution.

"The Indian Constitution guarantees equality before the law without any discrimination. These are principles we share.

"These principles underpin EU law... I trust that the outcome of the discussions will be in line with the highest standards set by the Indian Constitution," he said.

Astuto was replying to a question the CAB at a press conference.

Diplomatic sources said the European Union has already taken up the issue with New Delhi as it was concerned over certain provisions in the proposed legislation.

The comments by the EU envoy came a day after the United States Commission on International Religious Freedom (USCIRF) called the CAB a 'dangerous turn in the wrong direction' and asked the US government to consider imposing sanctions against Union Home Minister Amit Shah and other Indian leaders if the bill with the 'religious criterion' is turned into a law.

On its part, the External Affairs Ministry has rejected the USCIRF statement.

The opposition parties have come down hard on the government on the proposed legislation.

The Lok Sabha passed the bill on Monday. The Rajya Sabha is slated to take it up on Wednesday.

On Kashmir, Astuto said the European Union understands India's security concerns, but insisted that steps should be taken to restore normalcy in the Valley, adding the bloc's views on the matter remained unchanged since August.

In August, India announced withdrawing special status of Jammu and Kashmir and bifurcating the state into two union territories.

Pakistan reacted angrily to the move and downgraded its diplomatic ties with India, besides trying to rally international support against New Delhi over the decision.

"We did convey our concerns about the situation on the ground, especially restrictions on fundamental freedom. It is crucial that freedom of movement and means of communication are restored as well as the essential services," Astuto said.

"We want the government to take steps to restore normalcy in the region...we have understanding about India's security concerns. Our position has been consistent and unchanged," he said.

Following the decision to reorganise Jammu and Kashmir, internet and mobile phone networks and landline networks were cut off while key political leaders put under house arrest. Large parts of the Valley are still reeling under the restrictions.

Astuto said there have been contacts between the EU and India on the Kashmir issue. "We held talks with the External Affairs Minister on couple of occasions."

On visit of a group of European parliamentarians to Kashmir in October, the envoy said it was not an official trip.

"The MEPs (Member of European Parliament) were in India on an individual capacity. It was not an official visit...The visit was not an expression of the policy decision by the EU," he said.

In the first visit by a foreign delegation, a team of 23 MEPs travelled to Kashmir on Tuesday on a two-day trip to have a first-hand assessment of the situation after the state's special status was revoked.

Several of the 23 MPs belonged to right and far right parties and are not part of he mainstream in their own countries.

Opposition parties severely criticised the government for the move with the Congress describing it as the 'biggest diplomatic blunder' and others asking the Centre how these foreign lawmakers were allowed to visit the Valley while Indian leaders were denied permission.

On its part, the government said the trip was considered to be in India's larger national interest as it helped getting international attention on Pakistan's support to cross-border terrorism. 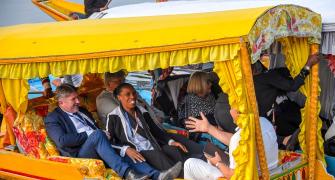