Assam chief minister Tarun Gogoi on Tuesday hinted at the involvement of a third force behind the raging ethnic violence in Bodoland Territorial Autonomous District Council (BTC) areas of Kokrajhar and Chirang.

Gogoi called upon all the communities to exercise restraint and help the administration deal with the crisis. However, the president of the opposition All India United Democratic Force (AIUDF) Badaruddin Ajmol and the president of Asom Gana Parishad (AGP) Prafulla Kumar Mahanta blamed the Assam government for its failure to restore peace and harmony in the BTC areas.

Meanwhile, the Sub-divisional Police Officer of Bijni sub-division under the BTC area, Narayan Das on Tuesday sent his resignation to the state's director general of police protesting non-arrival of adequate forces to tackle the volatile situation.

He also said that the situation would have been much better had additional forces arrived promptly as soon as the situation stared deteriorating since Saturday. 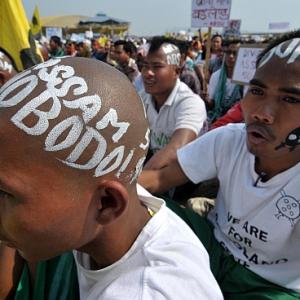