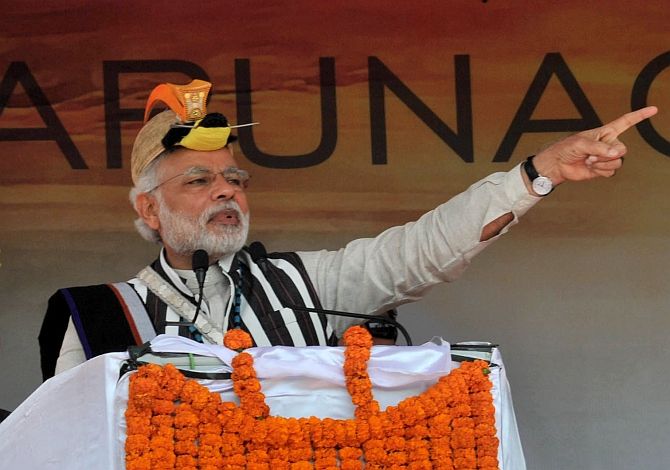 In the second protest in as many days, China on Saturday expressed its opposition to Prime Minister Narendra Modi's visit to Arunachal Pradesh contending that the action "artificially amplified differences on the border dispute".

"Liu expressed 'strong dissatisfaction and staunch opposition' to the Indian side's insistence on arranging the visit by its leader to the disputed area on China-India border," the report said.

The Chinese embassy in India had lodged representation with the Indian authorities on the visit on Friday night, the Xinhua report said.

Liu said "such act by the Indian side artificially amplified differences between the two countries on the border issue and thus went against the principles and consensus that the two sides reached on properly addressing the issue," the report said.

He reiterated that China which has consistent and clear-cut stance on the border issue "never recognised the so-called 'Arunachal Pradesh' unilaterally set up by the Indian side".

"It's a universally recognised, un-evadable fact that significant disputes do exist on the eastern section of the China-India border," Liu said.

While China routinely protests and criticises

high level Indian visits to Arunachal Pradesh, the twin protests over Modi's visit came in the midst of the two countries improving relations with a host of initiatives including steps to improve relations between the troops patrolling the border.

External Affairs Minister Sushma Swaraj visited Beijing early this month and held talks with President Xi Jinping and other officials, especially about Modi's planned visit to China in May this year.

Special Representatives for border negotiations on both sides, National Security Advisor Ajit Doval and his Chinese counterpart Yang Jiechi are expected to meet in the next few weeks to hold the 18th round of talks to resolve the vexed dispute.

The Chinese position is that the border dispute is confined to 2,000 kms mostly in Arunachal Pradesh whereas India asserts that the dispute covers the western side of the border spanning to about 4,000 kms including Aksai Chin area in Ladakh occupied by China in the 1962 border war.

Liu told Kantha that China places importance on developing relations with India adding that the two countries as neighbours and the top two developing nations in the world, share broad prospect on cooperation at various levels.

He expressed the hope that the Indian side should treasure the sound momentum in the growth of bilateral relations and march toward the same goal with China and abide by the important consensus on the border issue.

Liu called for the Indian side not to take any action that may complicate the border issue and stick to the general orientation of resolving the issue through bilateral negotiations so as to maintain the overall growth of bilateral relations, the Xinhua report said.
Source: PTI© Copyright 2020 PTI. All rights reserved. Republication or redistribution of PTI content, including by framing or similar means, is expressly prohibited without the prior written consent.
Related News: Liu Zhenmin, China, Kantha, Arunachal Pradesh, Narendra Modi
SHARE THIS STORY
Print this article