Discontent brewing in TMC camp ahead of 2021 Bengal polls

With assembly polls just months away, the ruling Trinamool Congress in Bengal, which was so far busy making preparations to decimate the Bharatiya Janata Party, is now facing yet another challenge of keeping its house in order, as several members have been voicing their dissent against the leadership. 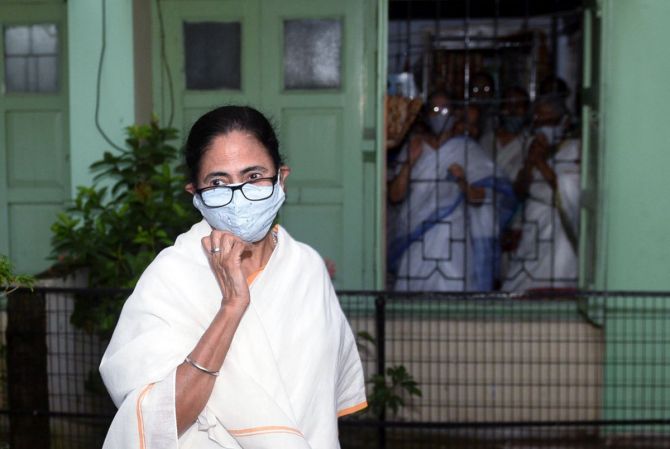 As state minister Suvendu Adhikari, along with other functionaries, openly air grievances against the Mamata Banerjee-led dispensation, senior leaders are frantically looking for ways to pacify the rebels.

Adhikari, who has been maintaining a distance from the top brass over the last few months, commands mass support and is considered only second to Banerjee in the party.

The TMC leadership, however, has said that the minister is 'very much with the party' and there was no crisis, as speculated.

The party has initiated back-channel talks with the transport minister, who wields influence over around 45 seats in East Midnapore and the Junglemahal belt, but a section of the leadership is apprehensive about his next move.

According to party sources, Adhikari, who played a crucial role in the Nandigram anti-land acquisition movement, has trusted lieutenants in 18 out of the 23 districts.

"Retaining him is the key to returning to power in 2021. If he leaves the party, it will adversely affect us, both electorally and politically. Many leaders who are either speaking against the party or are not happy might join him," a senior TMC leader said on the condition of anonymity.

Sources close to the disgruntled leader said he was unhappy with the organisational rejig effected a few months ago, and wasn't comfortable with the idea of scrapping the post of district observer.

Adhikari, a former TMC observer, felt that 'attempts were being made to clip his wings', the sources claimed.

Rumours were rife that the minister, a member of the high-powered core committee, was being tipped for a top post in the organisation and an announcement to that effect was in the offing. That, however, did not materialise.

"Suvendu Adhikari feels he didn't get his due in the party and attempts are being made to sideline him to make space for a senior TMC MP. He is also not happy with the interference of poll strategist Prashant Kishor and I-PAC in organisational matters.

"The party is trying to address his grievances, let's see what happens," the TMC leader said.

It's not just Adhikari that is troubling the top brass, several other MLAs and leaders have also openly spoken against the leadership, something which was unthinkable even a few years ago.

Many have directed their anger towards Kishor and his team -- hired by the party to strengthen its poll prospects. Among them, Singur MLA Rabindranath Bhattacharya, who had also played a vital role in the anti-land acquisition movement, Coochbehar South MLA Mihir Goswami to Arambagh MLA Krishnachandra Santra to Barrackpore MLA Silbhadra Dutta have openly criticised the leadership. Some have also expressed their desire to quit the party.

The latest to add to the list is party MLA from Sitai constituency Jagadish Chandra Barma Basunia.

According to the TMC leader, apart from Adhikari, four other ministers have either vented their displeasure against the party or are maintaining a distance from the leadership.

"Not just these six MLAs, there are many other legislators, councillors, district leaders who are unhappy with the functioning of the party, especially the workings of the I-PAC team. After spending so many years in the party, we are being sidelined and asked to work as instructed," said another senior TMC leader, who did not wish to be named.

Reports suggest that I-PAC has engaged more than 1,200 volunteers, with each assembly constituency having around 4-5 officials to take stock of the organisation and its affairs.

Recently, a group of TMC workers from various districts had staged a sit-in outside the party's state headquarters, accusing the party of ignoring the old-timers.

It was after the senior leaders intervened, the demonstration was withdrawn.

Another reason behind the brewing anger against I-PAC team is the survey it had conducted across the state to gauge the popularity of the sitting TMC MLAs, and its attempt to woo leaders from other parties such as Left and the Congress.

"I-PAC had identified corruption and infighting among a section of the lower and middle-rung members as one of the key problems. The party has also taken action and made changes based on the inputs. This has angered some people, who are either threatening to join the BJP or are keeping in touch with the saffron camp," a TMC MLA said.

The I-PAC, however, has declined to comment on the matter, and said it was just doing its job.

Political analyst Biswanath Chakraborty feels 'both the TMC and the BJP are keenly waiting to see Suvendu's next move. It will decide the fate of the 2021 assembly polls'.

"If Suvendu Adhikari stays in the party, the TMC will be at an advantageous position. If he switches over to the BJP, a change is likely in next assembly polls. It is a watershed moment for the TMC," Chakraborty stated.

Reacting to the development, senior TMC leader and MP Sougata Roy, who has been engaged by the party for back-channel talks with Adhikari, said the transport minister is still very much a part of the organisation.

"Suvendu is still very much with the party. The media should stop speculating. There is no crisis. Out of over 200 MLAs, if five or six MLAs have an opinion to express, that is not a problem. Everything will be taken care of," Roy said.

His party colleague and state general secretary Partha Chatterjee said both the people of the state and the cadres of the party are firmly standing by the side of Mamata Banerjee.

The TMC would return to power with a much bigger mandate, he asserted.

The BJP, which is currently on the wait-and-watch mode and is enjoying the rumblings in the ruling party, said able organisers and leaders have no place in a party like the TMC.

"Only a party like the BJP can accommodate and treat leaders having good organisational and governance capabilities with respect. The TMC functions mostly like a personal fiefdom, it can never accommodate capable leaders like Suvendu Adhikari," state BJP president Dilip Ghosh said.

Elections to the 294-member West Bengal Assembly are likely to be held in April-May next year. 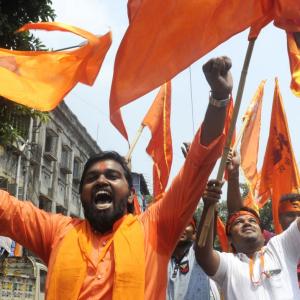