With six persons testing positive for coronavirus on Wednesday, the count of infected persons in Dharavi, the densely-populated slum area of Mumbai, rose to 13, civic officials said.

IMAGE: A view of a deserted road near Dharavi in Mumbai during a nationwide lockdown in the wake of coronavirus pandemic. Photograph: Kunal Patil/PTI Photo

A 64-year-old COVID-19 male patient from Dharavi died during treatment on Wednesday, taking the number of such victims from the slum to two, they said.

"The deceased was a resident of Social Nagar in Dharavi. He died at KEM hospital, where he was admitted on April 7 following complaints of fever, cough and breathlessness," a civic official said.

He was suffering from diabetes, hypertension and chronic obstructive pulmonary disease, the Brihanmumbai Municipal Corporation (BMC) said in a release.

The patient from Mukund Nagar was a high risk contact of a 49-year-old man, who earlier tested positive for coronavirus, and was kept at a quarantine facility, he said.

"The 60-year-old woman from Muslim Nagar works as a cleaner at the KEM Hospital. She tested positive for coronavirus on Wednesday afternoon, which took the number of COVID-19 patients from Dharavi to 10. These cases include a 56-year-old person who died at Sion Hospital," the official said.

Late on Wednesday evening, another three patients -- including a couple -- a 59-year-old man and his 49-year-old wife- from Janata Society in Dharavi tested coronavirus positive, he said.

The contact tracking of the couple is underway, the BMC official said.

"With this, the number of COVID-19 patients increased to 13, including two dead," the official said.

Dharavi is one of the biggest slums in Asia where nearly 15 lakh people live in small shanties, making it one of the most congested areas of the metropolis. 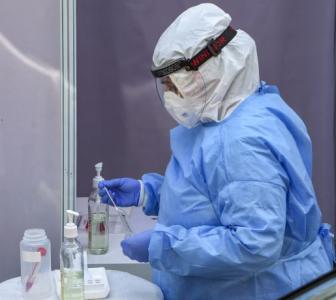