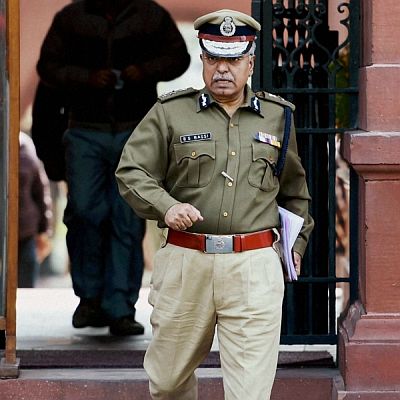 In a bid to douse suspicion raised by some former Delhi police chiefs who have been quoted in media reports that they were unaware of such practice, Commissioner B S Bassi said that being a big organisation, it is not necessary that everything is brought to the knowledge of the police chief.

"Delhi Police is a very big organisation. A number of activities take place. There are routine activities, which may or may not come to the notice of the top man. Even in this case, pro forma had been made and they were being maintained, which came to my notice when the matter became controversial.

"I don't blame my predecessors for not knowing that such pro formas was there. I am not surprised that my predecessors were not aware of this very elementary routine activity," Bassi told reporters outside Parliament.

Advising that "too much" should not be read into it, Bassi said, "There are too many things, so the person who is heading the organisation invariably may be busy with the major issues confronting the organisation or crisis management. There is nothing sinister in taking such details."

According to police, survey of MPs living in central Delhi through a pro forma is an old practice dating back to 1960s, which was revised on various occasions.

"This pro forma was revised as early as in 1957, 1987 and then in 1999. So it is fairly an old practice. It is done with the motive of ensuring maintenance of public order and safety and security of important persons in the city," said Bassi.

Two Delhi Police personnel, Rameshwar Dayal and Shamsher Singh had visited Rahul's residence recently with this pro forma asking how he looks and the colour of his eyes.

The incident sparked a row on Saturday as Congress accused the Narendra Modi government of carrying out "political espionage" on Rahul claiming that Delhi police personnel had been caught seeking "unwarranted and weird" enquiries about him.

Delhi Police, however, rejected the allegation of snooping on Rahul and said the visit by policemen to his office was a routine practise of being in touch with the dignitaries and there was no malafide in it.