After two lawyers appeared before the Supreme Court on Wednesday claiming to represent one of the six accused in the December 16 gang-rape case, the court asked the sessions judge conducting the trial to find out who is his counsel and whether he wants to pursue the case for transfer of trial outside Delhi.

A bench headed by Chief Justice Altamas Kabir adjourned the hearing after the advocates indulged in verbal dual and started making claims and counter claims for representing the accused Mukesh.

The bench refused to hear the case and asked the sessions judge to find out who is the accused's counsel and whether he wants to pursue the case in the apex court filed by one of his lawyers seeking transfer of trial outside Delhi.

As soon as advocate M L Sharma, who claimed to have filed the plea on behalf of accused Mukesh to seek transfer of trial to Mathura in Uttar Pradesh on the ground of prejudice and charged atmosphere, started arguments, another lawyer V K Anand objected saying Sharma was no more associated with it.

The court then asked the advocate-on-record to appear before it at noon to find out the truth.

When the matter was again taken up after lunch, Anand did a U-turn saying he has been authorised by the accused to represent him only in the trial court.

Sharma then alleged that Mukesh is being tortured by the police and Anand was trying to create hindrance in hearing of the transfer plea in the gang-rape case in which arguments on charges will commence from Thursday.

The court then directed the sessions judge to talk to Mukesh and find out the truth behind these allegations and posted the matter for hearing on January 30.

A 23-year-old paramedic was gang-raped and brutally assaulted by six persons in a moving bus in south Delhi on December 16 and dumped on the road. She died in a Singapore hospital on December 29.

Mukesh, who along with four others, has been charged with murder, gang rape and unnatural offences, has alleged that in view of regular agitations, police and judicial officials are under pressure to pass orders according to the demands of the agitators and hence, a fair hearing is not possible.

"The sentiment has gone into the root of each home in Delhi by which even the judicial officers and the state are not spared and in these circumstances, he cannot get justice in Delhi at all," the petition said.

The accused, in his petition, said that "due to media reports and agitations and due to political statements and personal interest shown by the chief minister as well as various cabinet ministers, judiciary is under pressure to work against the petitioner".

Besides Mukesh, bus driver Ram Singh, Pawan Gupta, Vinay Sharma and Akshay Thakur, have been made accused in the case and they are charged with offences of murder, gang rape, attempt to murder, kidnapping, unnatural offences, dacoity, hurting in committing robbery, destruction of evidence, criminal conspiracy and common intention under the Indian Penal Code.

Except Thakur, who was arrested from Aurangabad in Bihar on December 22, rest four accused were arrested within 24 hours of the incident.

Their sixth accomplice is a juvenile and is being tried separately before the Juvenile Justice Board.

Source: PTI© Copyright 2021 PTI. All rights reserved. Republication or redistribution of PTI content, including by framing or similar means, is expressly prohibited without the prior written consent.
Related News: south Delhi, M L Sharma, Mukesh, Supreme Court, Juvenile Justice Board
Print this article
Rape victim and others like her deserve real change
Death penalty is no deterrent to rape 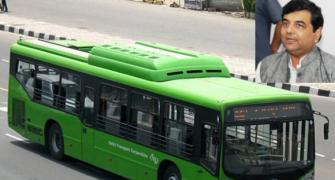