Covid 3rd wave has ended, no chance of 4th wave, unless...: Expert

Noting that the third wave of Covid-19 has ended in India, eminent virologist Dr T Jacob John said he is "fairly confident" that no fourth wave will occur in the country unless an unexpected variant that behaves differently comes up. 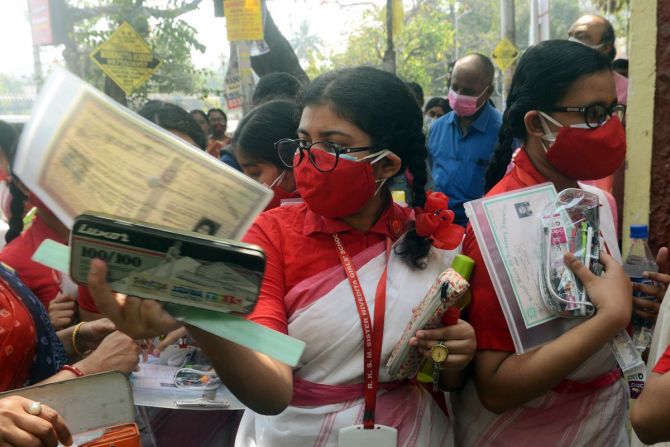 IMAGE: Students appear for the West Bengal Board of Secondary Education’s class 10 exam, being held offline after a gap of two years due to the Covid-19 pandemic, at Bethune Collegiate School, in Kolkata, March 7, 2022. Photograph: ANI Photo.

The third wave of Covid-19 had plateaued in India and the number of cases started declining after January 21 when 3,47,254 infections were reported.

John, former director of the Indian Council for Medical Research's Centre of Advanced Research in Virology, said it can be confidently concluded that the third wave has ended and the country has entered an endemic phase once again.

"I say (entered endemic phase) since my own definition of an endemic state is 'low and steady daily numbers, with only minor fluctuations, if any, for at least four weeks'. My personal expectation, hence opinion, is that we will be in the endemic phase for more than four weeks. All states in India show the same trend, giving me this confidence," he told PTI.

Asked about various virologists and others predicting that there would be no third wave, John explained the third wave was driven by Omicron and no one had predicted something like this to emerge, and that assumption that 'no third wave would come' was based on the variants present at that time.

"Unless an unexpected variant that behaves differently from alpha, beta, gamma or Omicron comes, there would be no fourth wave," he said.

John underlined that there might not be a fourth wave of the pandemic now.

"Taking all the available information in India -- epidemiological and virus variants --  and the global trend, we can be fairly confident that no fourth wave will occur, notwithstanding erudite mathematical model predictions. The model methodology is not valid in this situation," he said.

Elaborating further, the virologist said all past pandemics of respiratory-transmitted diseases have been due to influenza and every influenza pandemic ended after two or three waves, and remained in an endemic phase, with minor fluctuations of seasonal upsurges, always settling back to low numbers.

"Some years, the seasonal upsurges were by virus lineages that had undergone antigenic drift. SARS-CoV-2 will keep on developing mutations and it is possible that some mutations will cause some antigenic drift and such viruses may cause minor outbreaks -- mostly few and far between.

"So watchfulness, disease surveillance and gene sequencing of a sample of viruses must continue so that we will not be taken by surprise by a mutant variant," he added.

Source: PTI© Copyright 2022 PTI. All rights reserved. Republication or redistribution of PTI content, including by framing or similar means, is expressly prohibited without the prior written consent.
Related News: Jacob John, Centre of Advanced Research in Virology, West Bengal Board of Secondary Education, India, Indian Council for Medical Research
Print this article When will Covid end? Here's what experts say 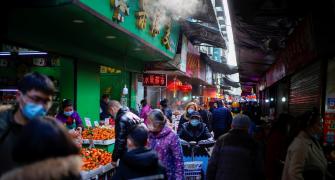 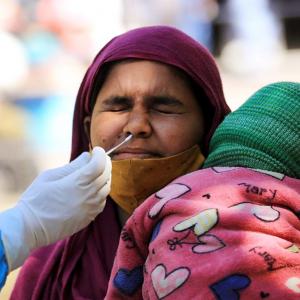 Covid will be reduced to an endemic in future: Experts