News
Business
Movies
Sports
Cricket
Get Ahead
Money Tips
Shopping
Sign in  |  Create a Rediffmail account
Rediff.com  » News » Covid will be reduced to an endemic in future: Experts

Covid will be reduced to an endemic in future: Experts

Cases of COVID-19 might be declining steadily but as the virus is mutating, attaining that magical zero figure in Delhi is unlikely, experts have said, and predicted that coronavirus will be reduced to an endemic in the future. 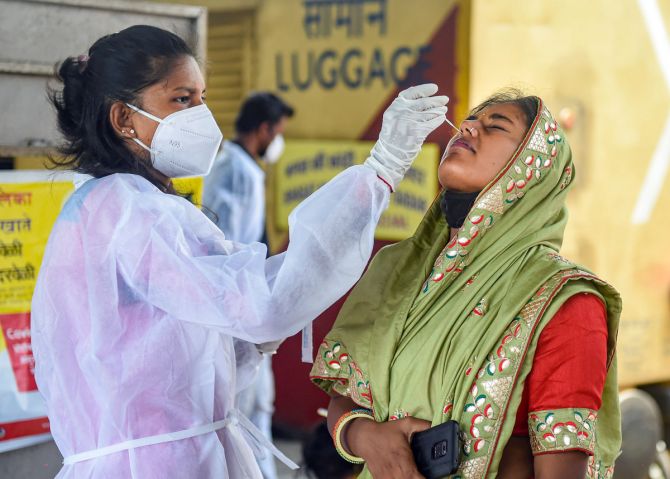 IMAGE: A BMC health worker collects swab sample of a passenger for COVID-19 test at a station in Mumbai. Photograph: Shashank Parade/PTI Photo

The Centre, Delhi Chief Minister Arvind Kejriwal and his cabinet colleague Satyendar Jain had said last year that one will have to live with coronavirus and make its prevention norms a part of our lives.

Dr Suresh Kumar, medical director of Delhi government-run LNJP Hospital said there will always be a few cases of the virus.

"Zero is an unlikely figure. The virus is mutating and it is difficult to predict it's future behaviour," he said.

Explaining why the virus has posed such a challenge, Dr Sanjeev K. Singh, Resident Medical Director, Amrita Hospitals in Faridabad said it is an mRNA virus which keeps changing its structure.

"These virus is smart and just for the sake of living, it will keep mutating. Covid will be there and may not be affecting all 193 countries but it will be there.

"Coming down to zero won't be achievable. In hospitals for getting surgeries, one has to get tested for Hepatitis and HIV. Eventually, you will be tested for Covid too," he said.

Dr Gauri Agarwal, IVF expert and founder of Seeds of Innocence said keeping the 1918 pandemic as a yardstick, we know that eradicating the virus is an unrealistic possibility.

"As COVID-19 gradually becomes an endemic, likely in 12-24 months, it will probably stop being a statistic that is being watched on a daily basis. Hence, while we may see zero reportable cases, there may never be a time with actual zero cases ever."

Amid concerns over the possibility of a third wave and emergence of the Delta Plus variant, experts assuaged fears of that possible wave being more lethal since a majority of the population has been infected.

"In my view, if a new strain doesn't come up against which the vaccines are not effective, I don't think the third wave will be as lethal as the second wave," said Dr Rajesh Chawla, Senior Pulmonologist, Indraprastha Apollo Hospitals, New Delhi.

He highlighted that coronavirus will become an endemic in days to come.

"Seventy per cent of the cases are limited to Maharashtra, and southern states. In north Indian states, there was a sudden exponential increase and the virus infected a large number of people together which is why the steady decline.

"The effect of the virus will be blunted because of the majority of people being exposed to the virus and vaccination," he added.

Tickoo said there might be a spike but if the virus doesn't become multi-resistant and undergoes mutations, the third wave won't be as deadly as the second wave and might be lesser in severity than even the first wave.

Delhi had reeled under a brutal second wave with oxygen shortage and unavailability of beds adding to woes of patients. However, in the last few days cases have shown a steady decline with the positivity rate coming down below one per cent.

On Monday, the city had recorded 59 cases, the lowest single-day rise this year, and two deaths. After that, the cases have hovered around the 90 mark.

Talking about the fluctuations in cases, Dr Gurpreet Sandhu, President, Council for Healthcare and Pharma, said, "On the fluctuation module, we are aware that the testing protocols in India are very abysmal, we do not follow standard protocol of testing. "Secondly, some people in rural community in India are still not aware about the what vaccine is for, how it will affect them or how it will protect them from the virus."

Experts unanimously vouched for vaccination as the answer to blunt the effect of the virus.

"The effect will be blunted because of the majority of people being exposed to the virus and the vaccination. As the vaccination numbers go up we will be able to blunt the virus impact. More than 50 lakh people have at least received the first while more than 18 lakh have been fully vaccinated," Tickoo said.

However, he said, vaccine hesitancy is becoming problematic.

"People still give preference to false news. It has the potential to derail our ambitious vaccination programme. Roping in celebrities, credible voices will help it while doctors have a big role to play. In the UK and the US, majority of the population has received their first doses. In the US they have taken off the masks. We should see these examples," he added. 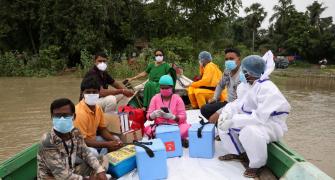 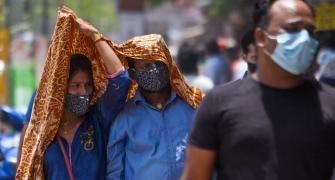 You're more likely to get Covid in these states 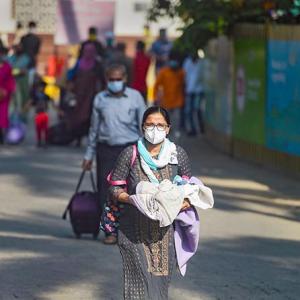 COVID-19 may never go away, says WHO