In a sweeping nationwide hunt, authorities across states have identified more than 6,000 people who attended the Nizamuddin Tablighi Jamaat congregation, the biggest COVID-19 hotspot in India, as more than 450 fresh cases of infection emerged on Wednesday to take the tally over 1,900 with at least 59 deaths. 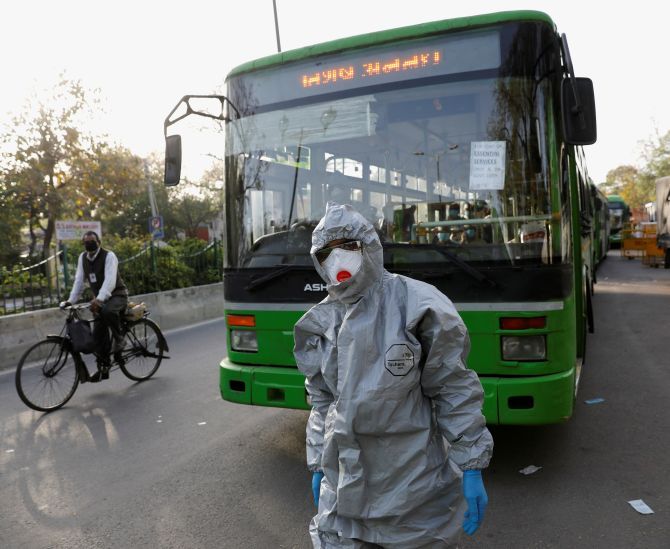 More than 5,000 of those identified to have attended the congregation have been quarantined, including in hospitals across states, while efforts are on to trace another 2,000 including in Gujarat, Tamil Nadu and Telangana.

The list includes foreigners as well, while some of those identified by the state authorities are yet to return from Delhi to their respective native places.

Authorities attributed the big spike in the numbers of confirmed coronavirus cases largely to the Tablighi Jamaat, an orthodox Muslim society set up nearly 100 years ago by Deobandi Islamic scholar Maulana Muhammad Ilyas Khandhalawi as a religious reform movement and to spread the faith. The Union health ministry data updated till 7.30 pm put the nationwide tally of the confirmed COVID-19 cases at 1,834, after 437 new cases were reported in the past 24 hours, and the death count at 41. But figures announced by states and union territories totalled 1,949 with at least 59 deaths.

The ministry officials said cases have increased largely due to Tablighi Jamaat congregation, which took place in mid-March, and therefore technically it does not show a national trend. They urged people to follow guidelines during lockdown period and avoid congregations, including religious gatherings.

Maharashtra, Tamil Nadu and Delhi were among the places to report a large number of new cases. While more than 450 confirmed cases were reported by all states put together, they also reported at least 14 new deaths due to COVID-19.

In Delhi, the authorities said coronavirus cases have risen to 152, including 53 who attended the Nizamuddin congregation. IMAGE: Health workers sanitise their collegues after disinfecting an area near Nizammuddin mosque, in the wake of coronavirus pandemic, in New Delhi. Photograph: / Rediff.com

The number in Maharashtra increased by 33 to 335 on Wednesday, including 30 in Mumbai alone. The tally can increase further as nearly 5,000 quarantined persons are in the high-risk category, according to the state government. The state reported six deaths on Wednesday, taking the total to 16 -- the maximum in the country.

In Tamil Nadu, 110 people who returned from Tablighi Jamaat meet in Delhi have tested positive, taking the total cases in the state to 234.

In Tamil Nadu, at least 515 persons have been identified for having attended the Nizamuddin meet, while at least 59 of them have been quarantined. Chief Minister K Palaniswami said 1,131 men have returned to the state of the about 1,500 people who went for the event.

In Telangana, 50 of the 57 positive cases had attended the gathering, while the state authorities have identified and quarantined at least 840 people linked to the event. The search is on for 160 others. IMAGE: Police personnel during a search operation for devotees who had recently attended the religious congregation at Tabligh-e-Jamaat's Markaz in Delhi's Nizamuddin area, in Prayagraj. Photograph: PTI Photo

In Delhi also, Deputy Chief Minister Manish Sisodia said 2,361 people were evacuated from the place of the Nizamuddin congregation, out of which 617 have been admitted to hospitals for showing COVID-19 symptoms while the rest are quarantined.

The Centre on Wednesday also asked all states and Union Territories to launch on a "war footing" the contact tracing of all participants of the Tablighi Jamaat congregation in Delhi's Nizamuddin, which has emerged as the coronavirus hotspot. 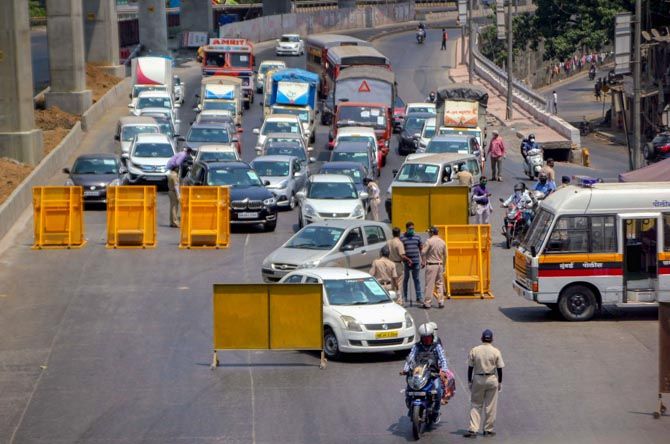 IMAGE: Police personnel stop commuters at the entry-exit way of Madhusudan society at Dahisar East after it was completely closed following few positive cases of COVID-19 being reported in the area, in Mumbai. Photograph: PTI Photo

In a video conference with chief secretaries and DGPs of all states and Union Territories, Cabinet Secretary Rajiv Gauba also asked them to take action against foreigners, who participated in the missionary activities of the Tablighi Jamaat, for violation of visa conditions.

The Uttar Pradesh government has also ordered 569 people to be quarantined for having attended the congregation, while Gujarat has so far quarantined at least 85 and a massive manhunt is underway as nearly 1,500 from the state have been found to have participated in the religious gathering.

Gujarat high court, separately, also issued notice to the central and the state governments over the Nizamuddin congregation.

The Uttarakhand government has also identified 26 such people, but said they were yet to return from Delhi. 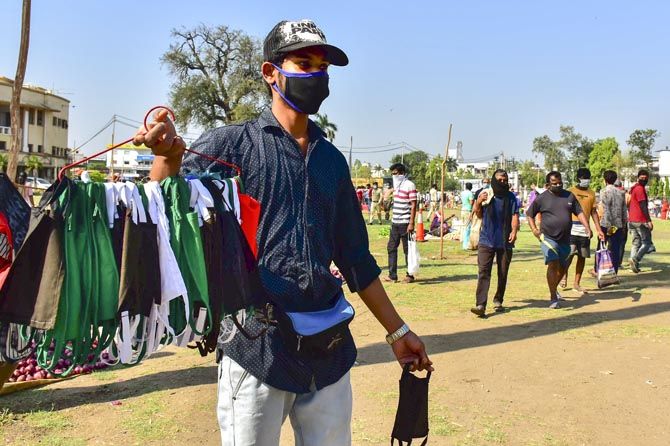 IMAGE: A vendor sells face masks at a market during the complete lockdown imposed in view of the coronovirus pandemic, in Jabalpur. Photograph: PTI Photo

In Rajasthan, the government officials said 538 persons could have travelled to various parts of the state after attending the event. The state reported 27 new cases of confirmed infection on Wednesday, including 11 who attended the Nizamuddin event, taking its overall tally to 120.

At least 81 Tablighi Jamaat returnees are suspected to be in Bihar, out of which 30 have been identified, while Assam has now has 13 confirmed cases of the deadly virus infection all of whom had attended the Tablighi Jamaat meet.

According to Assam government, there are 347 people in the state who had attended the congregation, of which 230 have been located so far.

At least seven COVID-19 deaths so far have had links to the congregation -- six in Telangana and one in Jammu and Kashmir. IMAGE: A police person raises his baton on commuters for not complying with lockdown guidelines, imposed in the wake of coronavirus pandemic, in Karad. Photograph: PTI Photo

The Jammu and Kashmir government on Wednesday reported seven new positive cases, taking the total number in the Union Territory to 62. Besides, a total of 17,041 cases are under surveillance there.

In West Bengal, three more COVID-19 patients have died, taking the death count in the state to seven, while the state government traced 71 people, including foreigners, who had attended the Tablighi Jamaat congregation. Chief Minister Mamata Banerjee said so far 37 cases of COVID-19 have been reported in the state.

Andhra Pradesh reported 67 new confirmed cases, taking its total to 111, with all fresh cases being related to the Delhi congregation. IMAGE: A worker sprays disinfectants on a truck entering APMC grain market, during a nationwide lockdown in the wake of coronavirus pandemic, in Navi Mumbai. Photograph: PTI Photo

Amid heightened efforts to contain the pandemic, Prime Minister Narendra will also hold a video conference with all chief ministers on Thursday during which issues such as ways to contain the spread of COVID-19, movement of migrants and contact tracing of Tablighi Jamat participants are likely to come up for discussion, sources said.

The availability of essential items will also be discussed during the conference in the wake of the ongoing nationwide lockdown, which entered the 8th day on Wednesday. 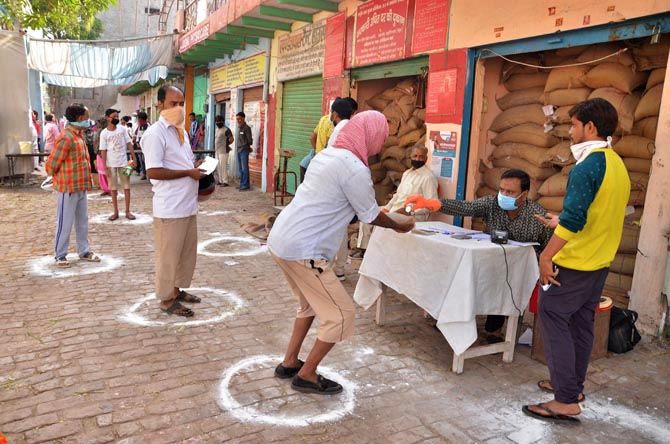 IMAGE: People maintain social distance as they stand in a queue to recieve food grains, during a nationwide lockdown in the wake of coronavirus pandemic, in Mathura. Photograph: PTI Photo

In the meantime, the armed forces have made available over 9,000 hospital beds and more than 8,500 doctors and support staff across the country to deal with the rising cases of coronavirus infection, while Railways has also converted some of its coaches into isolation wards.

India is also looking at South Korea, Germany and China for procurement of cutting-edge technology and adopting best practices being followed by them in successfully containing the spread of coronavirus amid looming risk of the country entering the community infection stage of the pandemic, officials said. 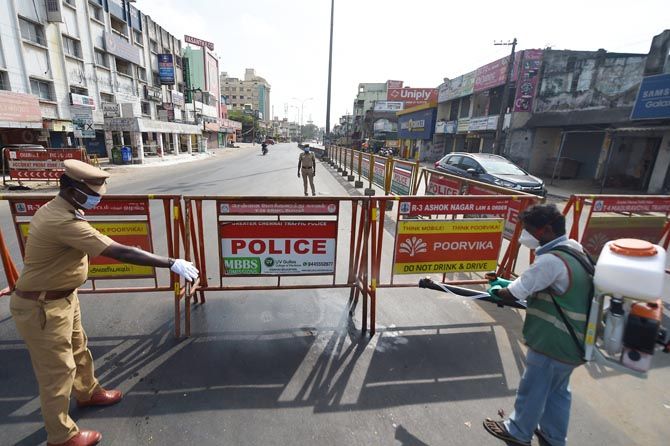 IMAGE: Health worker sprays disinfectant on roads as a measure to prevent the spread of coronavirus, during the nationwide lockdown, in Chennai. Photograph: PTI Photo

Fresh cases of infection reported on Wednesday included some doctors and a police constable as well.

More than 43,000 people have died due to COVID-19 worldwide so far since December, while more than 8.6 lakh infections have been reported so far. Nearly half of the world population is currently under partial or full lockdown, taking a big toll on the economy as well. 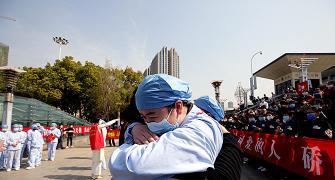