This was the fourth consecutive day that COVID-19 cases in the country have increased by more than 26,000. 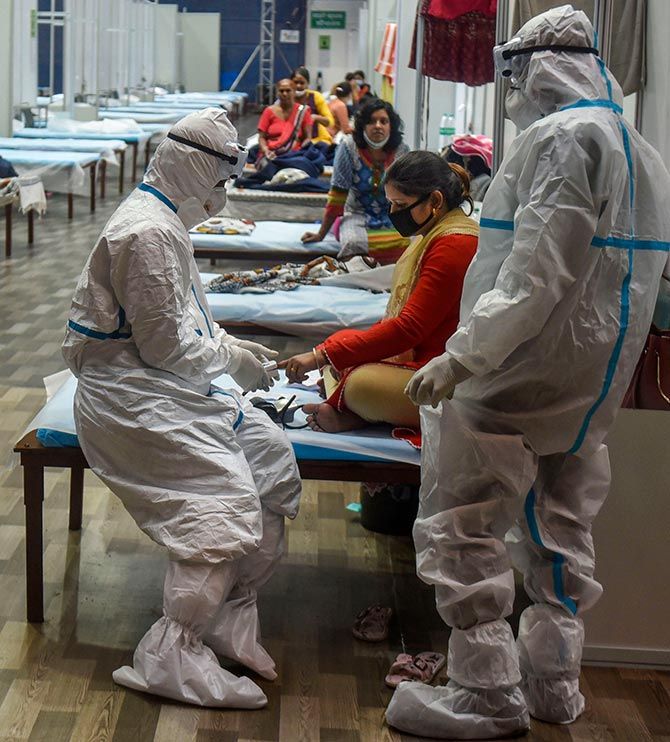 India saw yet another record single-day jump of COVID-19 cases, with 28,701 fresh infections pushing its tally to 8,78,254 on Monday, even as the recovery rate further improved to 63.02 per cent, according to the Union health ministry.

The recovery rate in 19 states and union territories is higher than the national average of 63.02 per cent, it said.

The death toll climbed to 23,174 with 500 people succumbing to the infection, according to the ministry's data updated at 8 am.

The number of recoveries stand at 5,53,470, while there are 3,01,609 active cases of the coronavirus infection currently in the country, and one person has migrated, the data stated. 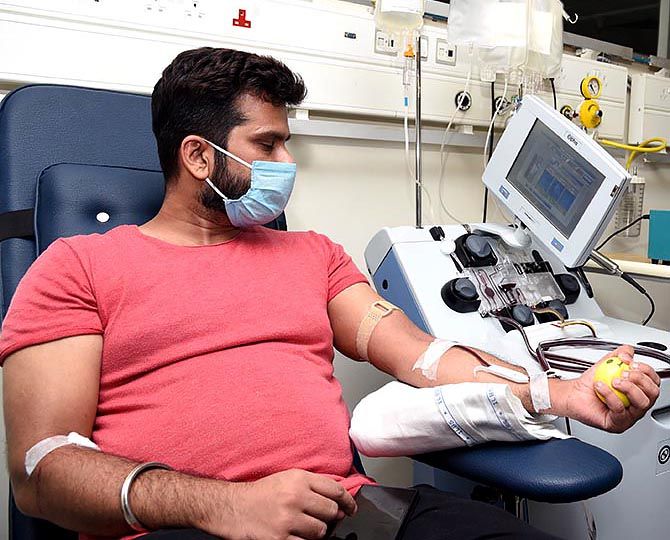 This is the fourth consecutive day that COVID-19 cases in the country have increased by more than 26,000.

The Centre on Monday asserted that coordinated steps taken by it along with state governments have contributed to a "gradual surge" in the recovery of patients.

It also said that there are 30 states and union territories that have a fatality rate lower than the national average of 2.64 per cent.

The norms and standards for home isolation care along with use of oximeters have also helped to keep a check on asymptomatic or mildly symptomatic patients without burdening the hospital infrastructure, the ministry said in a statement.

"The series of pro-active, pre-emptive and coordinated steps taken by the Centre and the state governments for containment and prevention of COVID-19 has contributed to a gradual surge in COVID-19 recovery," the ministry said. Aggressive testing coupled with timely diagnosis has led to identifying COVID-affected patients before they progress into an advanced stage of the disease, it said.

Effective implementation of containment zones and surveillance activities ensured that the rate of infection stays under control, the ministry said.

The recovery rate has further improved to 63.02 per cent, the ministry said, adding that 19 states and UTs have a recovery rate higher than the national average. 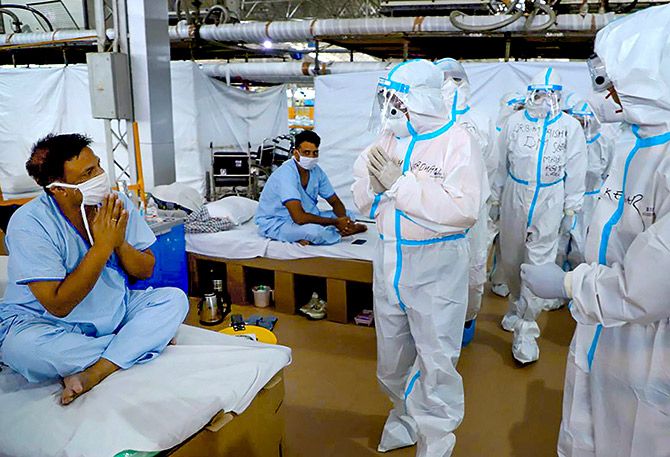 India's fatality rate has also dropped to 2.64 per cent owing to the increased stress on clinical management of critical cases, the ministry said. AIIMS Delhi continues to handhold Dedicated COVID Hospitals (DCH) through the COVID-19 National Teleconsultation Centre, it said.

Of the 500 new deaths reported, 173 are from Maharashtra, 71 from Karnataka, 68 from Tamil Nadu, 37 from Delhi, 26 from West Bengal, 21 from Uttar Pradesh, 19 from Andhra Pradesh, 13 from Gujarat, 12 from Bihar, 10 from Jammu and Kashmir, nine from Madhya Pradesh, eight from Telangana, seven each from Rajasthan and Jharkhand, four each from Haryana and Punjab, three from Odisha, two each from Kerala, Goa and Chhattisgarh, and one each from Uttarakhand and Chandigarh. 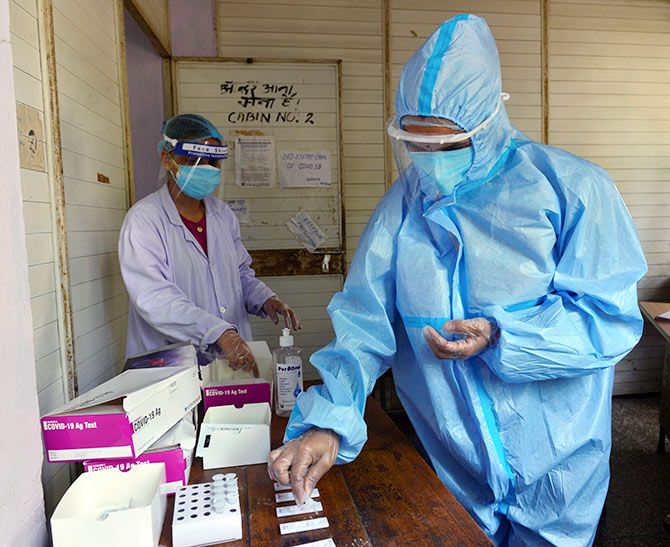 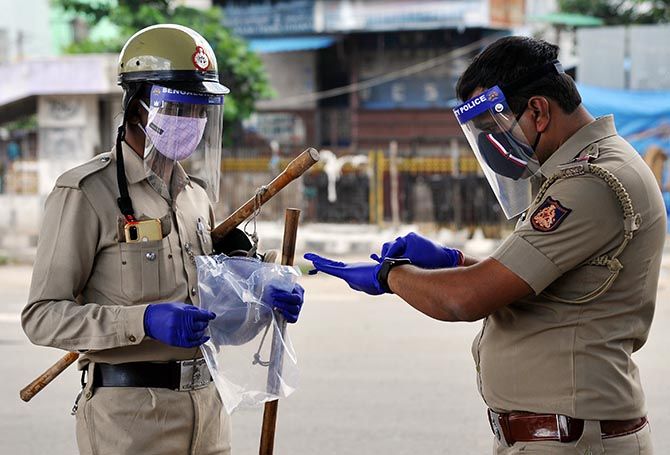 The testing per million is continuously growing and was 8555.25 as of Monday. 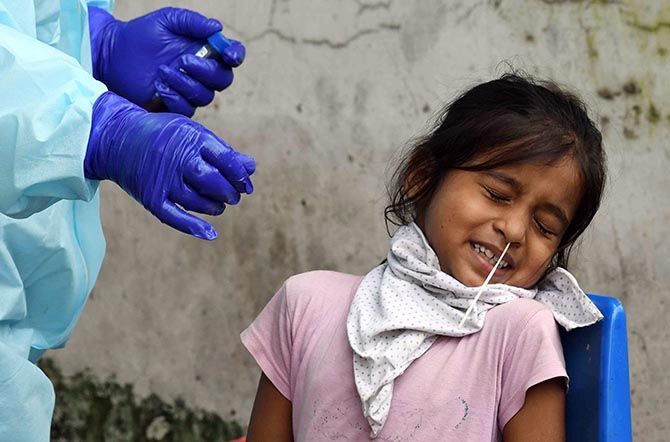 IMAGE: A health worker collects swab sample of a child for the COVID-19 test at Gardiner Hospital in Patna. Photograph: ANI Photo 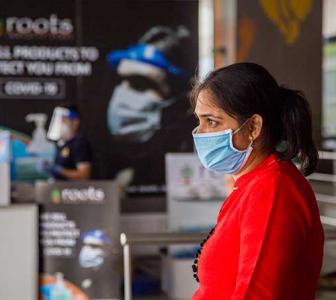 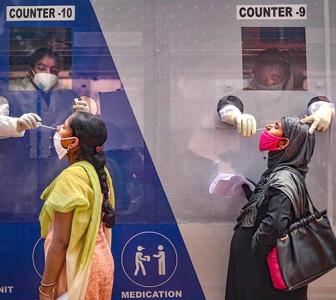 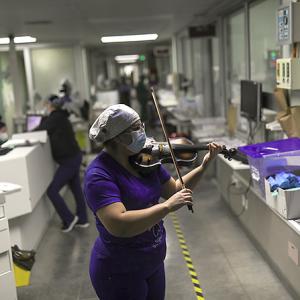