As scientists across the world work frantically to find a vaccine against COVID-19, which continues its rapid global spread, all eyes are on United States-based company Moderna's encouraging early results on a small group of healthy volunteers. Cautioning that a vaccine is still months, maybe even a year away, experts said the US-based biotechnology firm‘s results have propelled it to a pole position in the race of 118.

Eight candidate vaccines for COVID-19 are in the clinical evaluation, while 110 are in the preclinical stage, according to the World Health Organisation's latest draft landscape.

The other closely watched COVID-19 vaccine is the one being developed by scientists at Oxford University.

It appears protective in a small study of six monkeys, promising findings that led to the start of human trials late last month.

"Because Moderna's is the only vaccine having demonstrated any kind of immunologic response in the COVID-19 field, we would consider this to be the leading candidate," said Michael Breen, associate director, Infectious Disease, at GlobalData, a United Kingdom-based data analytics and consulting company.

"Of the vaccines in human trials, only two have demonstrated any kind of effectiveness," Breen told PTI, noting that the Moderna study proves that the platform can lead to the production of antibodies against a given virus.

Moderna on Monday announced positive interim clinical data of mRNA-1273, from the Phase 1 study led by the National Institute of Allergy and Infectious Diseases (NIAID).

The data comes from eight people who took part in a 45-subject safety trial that kicked off in March.

The study showed the vaccine was safe and all study participants produced antibodies against the virus, according to the company.

"Globally, one vaccine candidate that is promising is Moderna's mRNA based vaccine that showed promising results in the early trials," Upasana Ray, assistant professor at CSIR-Indian Institute of Chemical Biology in Kolkata, told PTI.

RNA is the genetic material of the viruses. While conventional vaccines are developed with an inactivated virus or using proteins made by virus, messenger RNA (mRNA) vaccines work by introducing a synthetic sequence of the viruses' genetic material that encodes the disease-specific protein to trigger the body's immune system, the experts explained.

The preliminary findings of the Oxford study appeared on the preprint server bioRxiv.

A pre-print is a full draft research paper that is shared publicly before it has been peer reviewed or published in a journal.

British drug maker AstraZeneca teamed up with researchers at the Oxford Vaccine Group and the Jenner Institute in developing the vaccine.

Breen described their 'ChAdOx1 nCoV-19' candidate vaccine as a 'standout'.

"While this vaccine has yet to demonstrate efficacy in humans, it was shown to be able to prevent infection and disease from COVID-19 in a primate model," he said.

While this needs to be replicated in humans, it is one of only two vaccines to have demonstrated any effectiveness in reducing infection due to COVID-19, making it a 'highly interesting candidate'.

Though the Moderna and the Oxford vaccines are in a leading position, there are several other vaccines, including those being developed in India, in the running.

In India, eight organisations are in the fray with a vaccine candidate , half of which are companies and the other half non-industry, said Brooke Wilson, associate director, Healthcare, GlobalData.

"These organisations are running or planning to initiate 12 clinical trials, one is ongoing, recruiting and the other 11 are planned," Wilson told PTI.

He explained that six of these trials are specifically for a COVID-19 vaccine while the other six trials use a vaccine developed for other indications, such as tuberculosis, adding that the majority of the trials are in Phase I, followed by Phase 3 and Phase 2.

Explaining the various phases in the development of a vaccine, E Sreekumar, chief scientific officer at the Rajiv Gandhi Centre for Biotechnology (RGCB) in Kerala, said Phase 1 trials are small-scale, usually involving few participants, to assess whether the vaccine is safe for humans.

"The final phase involves thousands of people to further assess the efficacy of the vaccine over a defined period of time, and can last several months," Sreekumar said.

However, he said Sinovac Biotech does not have the global marketing capabilities of AstraZeneca, which could impact worldwide availability of their vaccine.

In another animal trial, researchers from Fudan University in China last week announced that a single dose of a SARS-CoV-2 simulating particle vaccine induces potent neutralising activities in mice.

"These results support further development of ShaCoVacc as a candidate vaccine for COVID-19," the researchers wrote in a paper that appeared in pre-print platform BioRxiv.

A vaccine is designed to protect people before they're exposed to a virus -- in this case, SARS-CoV-2, the virus that causes COVID-19 -- according to the WHO.

It basically trains the immune system to recognise and attack the virus when it encounters it, the world health body noted.

"Vaccine development involves many steps starting from designing the candidate, mice immunisation studies and neutralising antibody repertoire testing, other animal immunisation trials like in ferrets, human safety checks, human trials of various levels before it is approved for general use," said Ray

This entire process, she noted, takes at least 12-18 months.

"However, the extent of worldwide effort been taken in this area is commendable and promising showing hope of a possible efficient vaccine in near future,'' Ray added.

"My personal understanding is that all of these strategies will yield results that may suit different profiles of recipients and might end up providing immunity, not exclusively though, against different strains of this virus that will emerge, if not there already," he said.

The number of COVID-19 cases is close to five million in 188 countries and region with more than 3,23,000 fatalities.

Shakoor Rather in New Delhi
Source: PTI© Copyright 2021 PTI. All rights reserved. Republication or redistribution of PTI content, including by framing or similar means, is expressly prohibited without the prior written consent.
Related News: Moderna, PTI, Michael Breen, Rajiv Gandhi Centre for Biotechnology, RNA
SHARE THIS STORY
Print this article 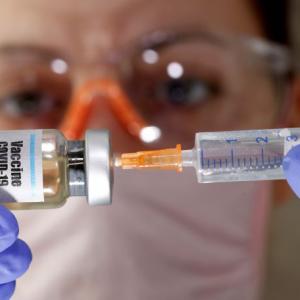