News
Business
Movies
Sports
Cricket
Get Ahead
Money Tips
Shopping
Sign in  |  Create a Rediffmail account
Rediff.com  » News » 'In six months' time I will come out with a vaccine'

'This is an improved version of BCG that also gives immunity against the coronavirus.' 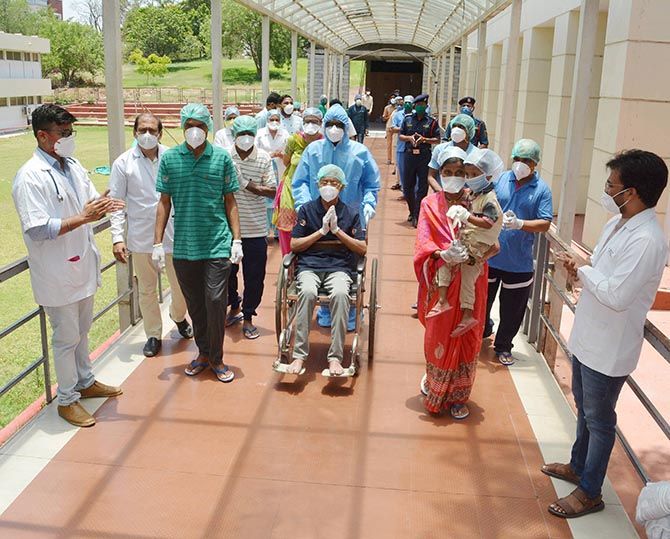 IMAGE: Doctors and medical staff applaud six patients as they are discharged from the Krishna Hospital in Karad, Maharashtra, after they had recovered from COVID-19, May 8, 2020. Photograph: PTI

Professor Gobardhan Das was the first immunologist in India to talk about the impact the BCG vaccine had in the fight against the COVID-19 virus.

Though he had been urging the authorities to start immunising the population with the vaccine to fight the coronavirus, his plea went unheard, unheeded.

Though his proposal was rejected, the health ministry has now approved of a clinical trial of the BCG vaccine at various institutions in India including AIIMS, Delhi.

"Now, when the US, Germany, the UK, The Netherlands, Australia, New Zealand, etc have started conducting clinical trials, those who criticised my idea made a 180-degree turn and approved clinical trials," Professor Das, below, tells Shobha Warrier/Rediff.com.

I am happy that what I have been talked about is accepted now. I had said that the BCG vaccine which contains a live, weakened version of Mycobacterium Bovis, can give immunity against the coronavirus.

I had written about it on social media. I had also written to the health minister that Mycobacterium Indicus Pranii would be an even more powerful vaccine.

I am happy that this has been approved by the ministry now.

But you are nowhere in the picture.

Everybody is aware that I was the first one in India to talk about the efficacy of the BCG vaccine.

Though I had been writing to the health minister about the idea, I was not consulted when they decided to go for a clinical trial. It would have been nice if I was taken in the team.

Why do you think you are sidelined?

Perhaps they feel they do not need scientists, and need only doctors.

But I feel such committees should consist of doctors, scientists and also epidemiologists. I don't know why they chose to ignore scientists.

But I am happy that finally they feel the idea is worth following up though initially they were against it.

ICMR said then that there was no scientific proof in what you were saying.

I put forth the idea only after comparing incidence and mortality data from all over the world.

Instead of discussing the idea, these organisations simply criticised it, and brushed it aside as one without any scientific proof.

But in 15-20 days's time, they took a 180-degree turn and decided to conduct clinical trials.

As a scientist, did you feel hurt that you were ignored?

In this case, I was not just appreciated but ignored too.

The truth is when Indians come out with an idea, it is not valued in India especially when it comes from a small person like me. The same ideas get validated when it is accepted abroad. That has been our way of life.

When you wrote about my idea, there were only very few countries talking about the BCG vaccine, and trials had not even started then. Today, many countries are doing clinical trials. 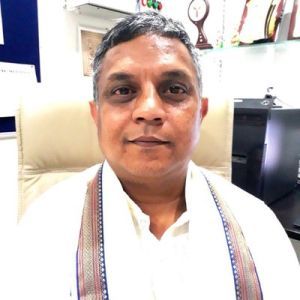 But the fact is, nobody in India cared about what I was saying. They did not give any attention to my idea.

First, I was ignored, and then my idea was criticised.

Now, when the entire world has accepted the idea and countries like the US, Germany, the UK, The Netherlands, Australia, New Zealand, etc have started conducting clinical trials, those who criticised my idea made a 180-degree turn and approved clinical trials.

I still feel it is not too late to include scientists in the team so that you can show the world which strain works.

Also, why do you give the authority to conduct clinical trials to a private company?

What should the ministry have been doing instead of asking a pharma company to conduct the trials?

We should be open about the clinical trials so that we can tell the world what we discover about the vaccine.

We shouldn't keep the results within ourselves, we should let the whole world know about the results.

That way, we can lead the world in the fight against the virus.

When I was talking about BCG vaccine, nobody gave a damn. Now, they have given approval to some company to do the trials.

What is needed is transparency and good scientific leadership.

The proposal you had submitted for the vaccine project was rejected. Now, you got a grant of $700,000 from abroad for the same project.

What I found out first was the BCG vaccine or MIP protects people from the coronavirus by giving non-specific immunity.

That made me think, can we do something better and specific? That is immunity-specific to the coronavirus.

Next question is, how do I do that?

I wanted to keep BCG as the base and then have the antigenic Covid-specific proteins on top of that using recombinant technology.

So, the BCG surface will look like coronavirus because of genetic engineering.

Such a vaccine will give immunity against coronavirus also.

This in fact is an improved version of BCG that also gives immunity against the coronavirus.

Basically, you are strengthening the vaccine efficacy.

When I sent this proposal, it was rejected.

But I felt the idea had high potential. That's why I sent the proposal outside India.

We had heard about the nepotism and corruption that existed in scientific research. It was said many scientists had to move from India to pursue research abroad. Why does it still exist here?

I am sorry to say corruption is the highest in scientific field.

Those who occupy the highest positions blatantly promote their own people. Once they get the chair, they do not want to vacate it.

Can you believe people at 85 and 90 are still ruling the field? And they only promote their own people.

When changes are happening so fast in the scientific field, you need more dynamic and young people, and not those who are inactive.

For example, the coronavirus is just five months old. How much does a retired, 85-year-old, person know about this?

People who have not published a single scientific paper in the last 18 years are in the task force.

What do they understand about the virus? Moreover, they appoint their own people in the committee. This is what is happening.

How frustrating is it for a scientist like you?

Of course, it is very frustrating. I work in the field of tuberculosis biology and have published the maximum number of papers, but here I am sitting at JNU which is not exactly a research institute. All because I don't belong to any group.

Because I do not have any godfathers, I am always sidelined and ignored.

This time also, why was my proposal rejected when the same proposal from somebody else was accepted?

But I can say for sure that in six months's time, I will come out with a vaccine. 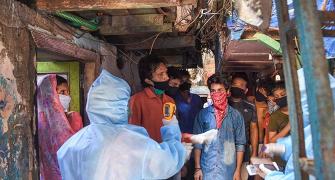 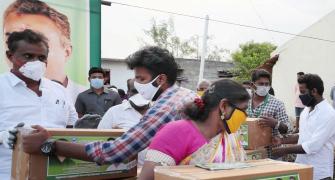