Southern states have gone in for a lockdown as part of the country's fight against the novel coronavirus, as the focus shifts to preventing the spread of the deadly virus that has brought the globe to a virtual standstill. 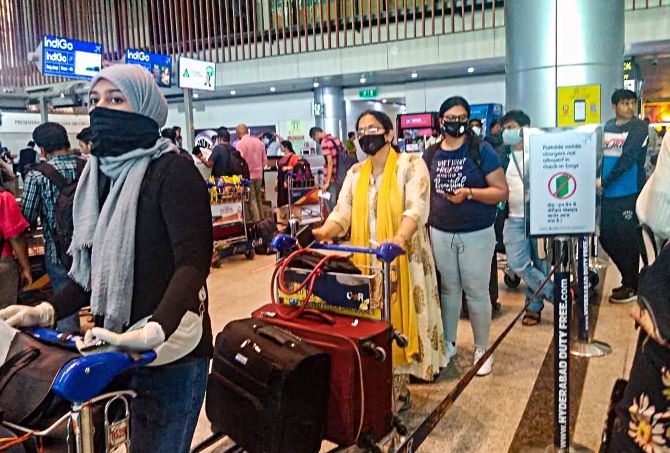 IMAGE: Passengers wear masks in the wake of deadly coronavirus, at RGI Airport in Hyderabad, on Wednesday. Photograph: PTI Photo

Monitoring and surveillance have been increased in the states, while the respective governments have even asked their citizens to avoid mass gatherings, thus seeking to bring into effect the much-needed social distancing, a key to stem the spread of the virus.

Kerala, Karnataka, Tamil Nadu and Telangana have announced a lockdown of educational institutions, malls and other places that attract people in large numbers, even as some of them have been reporting increase in positive cases.

Kerala being the worst-affected with 24 confirmed patients, the Communist Party of India (Marxist)-ruled state took the early lead in going
for preventive measures to check the spread of the virus, which has dealt a crucial blow to its tourism-dependent economy.

The positive cases include two foreigners and the state government has decided to strengthen surveillance by monitoring people entering the state.

Besides, those coming from foreign countries as well as domestic travellers would also be checked at airports.

People have been asked not to throng places of worship -- mosques, churches and temples and the state government has also held talks with religious leaders to implement the move. 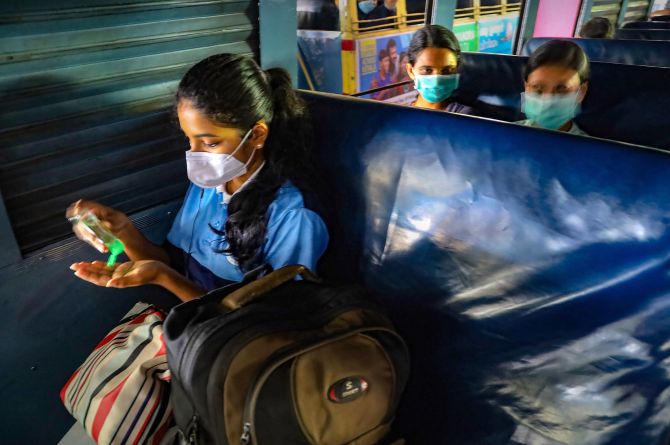 IMAGE: A passenger wears a mask and cleans her hands with sanitiser to mitigate the coronavirus pandemic, while sitting in a bus, at KSRTC bus stand in Kozhikode, on Wednesday. Photograph: PTI Photo

Kerala State Road Transport Corporation (KSRTC) has decided to disinfect all its buses before they start their service every day and railways are carrying out thermal checks in trains at various places in the state.

Karnataka, the only southern state to report the death of a COVID-19 affected 76-year-old man, initiated a lockdown immediately after the fatality, the first in the country, last week.

On Wednesday, the Chief Minister B S Yediyurappa said the Karnataka cabinet decided to earmark Rs 200 crore to combat the spread of coronavirus in the state, even as two more persons tested positive for coronavirus taking the total number of cases in Karnataka to 13.

The cases include a 76-year-old man from Kalaburagi who died last week.

The restrictions that have been imposed in the state for a week from March 14 have been extended till March 31, he announced in the Legislative Assembly after a special cabinet meeting to discuss the impact of COVID-19.

Chief Secretary T M Vijay Bhaskar would serve as a member of the taskforce, which would be headed by Sriramulu. 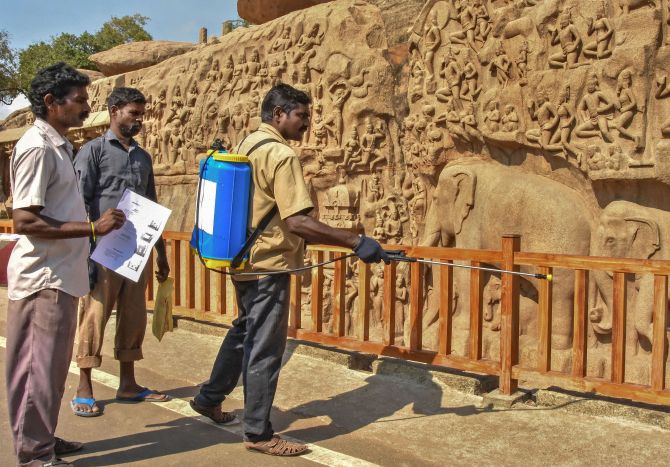 IMAGE: A worker sprays disinfectant to at Mahabalipuram in Chengalpattu district, on Wednesday. Photograph: PTI Photo

The Chief Minister said passengers coming by international flights would be tested and placed under quarantine for 15-16 days.

Tamil Nadu, with one positive case, has stepped up monitoring and is implementing strict surveillance measures in borders, besides railway stations.

Chief Minister K Palaniswami had announced a lockdown, ordering closure of all educational institutions and places thronged by public in large numbers such as bars, theatres, malls and resorts till March 31.

Amusement parks, swimming pools, gymnasiums, zoos and museums should be closed, he had ordered.

The government has directed marriage halls not to rent them out for weddings.

Temples under the control of the Archaeological Survey of India (ASI) in Tamil Nadu, including the famous

Brihadeeswarar Temple in Thanjavur, have also been closed, according to ASI officials.

While airports are under strict monitoring, screening would be intensified in railway stations and trains, the government has announced.

More testing centres are also planned in certain districts other than Chennai.

Lots of measures have been also proposed for the transport sector, where nearly 32,000 buses ferry around 2.5 crore passengers every day.

These include spraying disinfectants on the vehicles and suspending issuance of new driving licences till March 31 to prevent crowding at transport offices.

An 18-member Chief Secretary-headed task force has been constituted to coordinate measures against coronavirus.

A 68-year-old woman had on Tuesday tested positive in Mahe, an enclave of the union territory in Kerala, and her condition was stable in the government general hospital there.

It was the first positive case reported in the former French colony.

In Andhra Pradesh, which reported one positive case from Nellore, the state government has been enforcing sections 2, 3 and 4 of the Epidemic Diseases Act, 1897 to check the spread of the coronavirus.

An eight-member inter-department coordination committee, with Special Chief Secretary (Health) as the member-convenor, has been constituted for taking up concerted measures to contain COVID-19.

On Wednesday, the state government announced closing down all educational institutions across the state to prevent and contain the spread of coronavirus.

Chief Minister Y S Jagan Mohan Reddy reviewed the situation with officials of education and health departments and decided to announce holidays for educational institutions in tune with the Centre's guidelines.

Official sources said the holidays would initially be till March 31 after which the government would further review the situation and take an appropriate decision.

Telangana has also ordered closure of all educational institutions, coaching centres and summer camps till March 31.

Restrictions on attendance in marriages, no permissions for public meetings, seminars, workshops, celebrations, rallies, exhibitions, trade fairs and cultural events are the other measures.

Cinema halls, bars, pubs and clubs with memberships would remain closed through the week.

The Medical and Health Department has taken up surveillance in the international airport in Hyderabad, while sanitation work would be carried out continuously in buses and trains.

Source: PTI  -  Edited By: Utkarsh Mishra© Copyright 2020 PTI. All rights reserved. Republication or redistribution of PTI content, including by framing or similar means, is expressly prohibited without the prior written consent.
Related News: PTI Photo, Archaeological Survey of India, Central Board of Secondary Education and Indian Certificate of Secondary Education, IMAGE, KSRTC
SHARE THIS STORY
Print this article 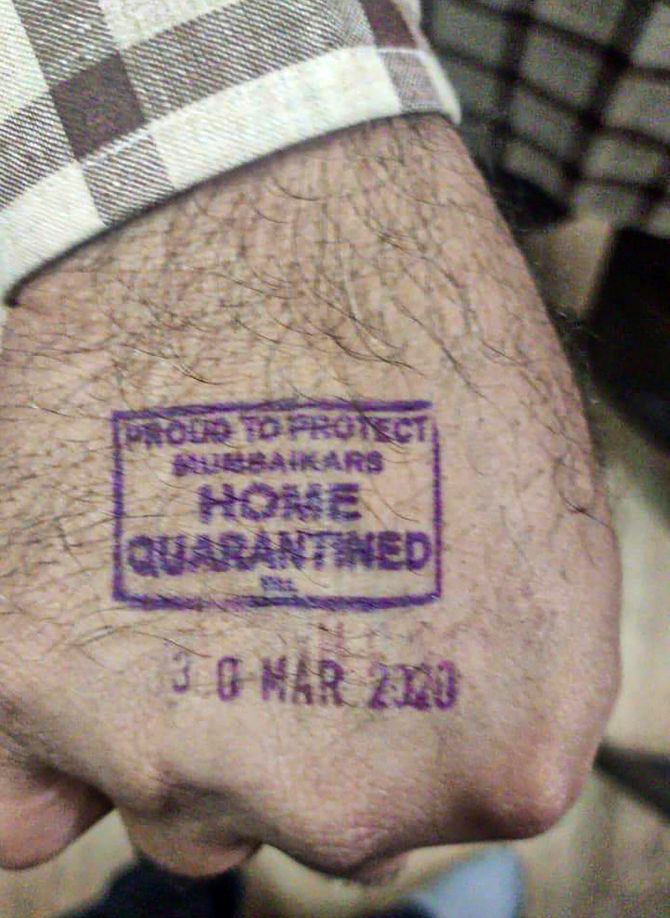